Employment of people with spinal cord injury in Switzerland

Work is an important part of social life. Research shows that work does not only ensure to make a living but also has a positive impact on health, well-being and social integration. This is especially true when it comes to people with disabilities. Unfortunately, they are far too often excluded from professional life. In Europe and the U.S., the average percentage of people with spinal cord injury (SCI) in paid work is approx. 35%. The figures for Switzerland were unknown so far. Therefore the study aimed at collecting data with regard to the employment of people with SCI and to analyse the reasons for and consequences of their employment.

In 2008, members of the Swiss Paraplegics Association that have been suffering from SCI for at least one year were asked to answer questions concerning their employment. 495 people participated in the study (for the socio-demographic characteristics of the participants see figure 1). 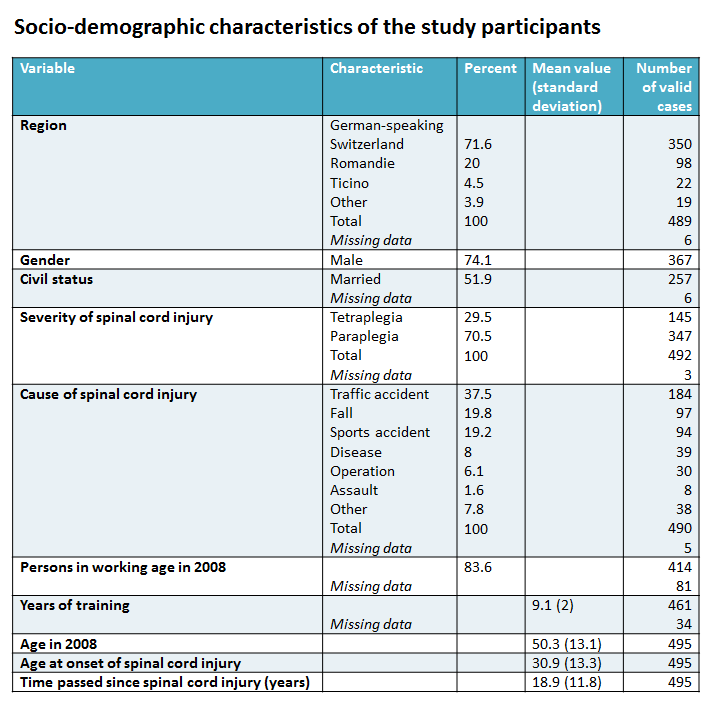 63.8% of the participants were employed – a quite high percentage compared to other countries. Quite astonishing was the fact that the percentage of employed tetraplegics was almost the same as that of employed paraplegics (63.4% vs. 64.7%). There were only major differences between the two groups with regard to the amount of employment (47.5% vs. 58.3%).
The importance of the work was mentioned as the factor with the strongest influence on employment. Therefore the importance of work was compared with the importance of other areas of life, such as sports, family/partner, friends and other leisure time activities. In general, it could be seen that the importance of work decreased after the SCI, whereas family became more and more important. Just like in other studies, the educational background was also an important factor in this study: With each year of education, the employment chances of people increased by 12%. Age also played an important role. With 82%, the group of people between 40 and 44 showed the highest employment rate – this was almost the rate of the general population which is at 91%. However, only 35% of the 60 to 64-year-olds were employed (see figure 2). 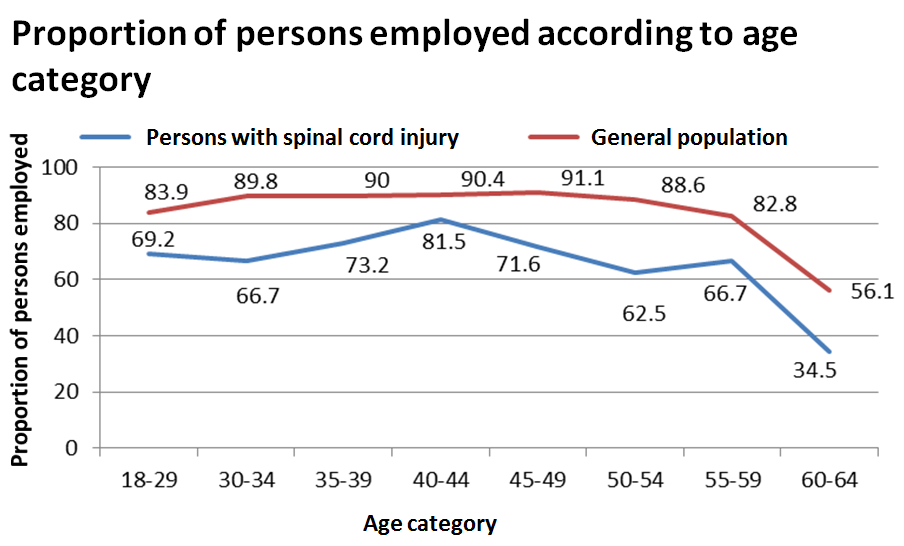 Figure 2: proportion of persons employed according to age category

When asked why they work, the following three reasons were the ones mentioned the most: “work satisfies me” (85%), “work provides social contacts” (71%) and “I need the money” (70%). Unemployed participants mentioned the following reasons for not working: “my health problems are too serious” (57%), “the pain is too severe” (50%) and “I haven’t been able to find a suitable job (37%)”. Surprisingly huge is the gap between employed and unemployed people with regard to income. According to this study, the income of people that were working was on average 40% higher than that of non-working people.

The study suggests that in Switzerland the reintegration of people with SCI into the labour market seems to work quite well. Possible reasons for this might be the overall positive situation at the Swiss labour market (low unemployment rate), as well as the structure of the labour market (many jobs in the office-, service- and computer sector that can be done by wheelchair users). Furthermore, most workplaces are accessible (accessibility and transport) and there is a comprehensive vocational rehabilitation offer. The high percentage of employed tetraplegics amongst other things might be due to the mostly good technical and financial possibilities (customized computer and workplace, converting of the car to get to work etc.) Due to these possibilities, even people with the most severe disabilities are able to participate in professional life.
People with SCI go to work for social reasons. The findings of this study confirm other research results and show that work plays a decisive role with regard to social integration. In most cases, the reasons why people do not work were related to health problems. This shows that, unlike in other countries, in Switzerland it is not the lack of infrastructure or transportation problems that lead to unemployment, but mainly the health problems caused by the spinal cord injury.
One of the consequences of employment is the significantly higher total income (wages and pension) of employed people. The legislator wants work to pay off. However, it is quite surprising that the financial situation of people who cannot work and have to live on pension payments (people with serious health problems and those with the most severe disabilities) is so much worse.
To summarise: According to this study, younger, well-trained and motivated people with only moderate health problems are the ones that are most likely to find employment – therefore, their financial situation is significantly better.

The study was carried out and financed by Swiss Paraplegic Research in Nottwil (Switzerland).