I would like to share with you an article written by a wheelchair traveler sharing his travel experience to Port Aventura Park, Aquatic Park and Tarragona. This article was originally published on the Russian forum invatravel.ru and is translated from Russian to English with the permission of the author.

Port Aventura is the 6th largest theme park in Europe. It attracts around 4 million visitors per year making it the most visited theme park in Spain.

We bought the two-day tickets for the Port Aventura Park directly at the Port Aventura Hotel. Retirees, children and people with disabilities are provided with a substantial discount. Since there are always long queues for the rides in the Park (around 40 minutes or more), it is recommended to buy a so-called «Express Pass» which gives you the right to wait in a separate queue. Having an «Express Pass» doesn't always guarantee a shorter queue. However, in our case, it was easier because the entrance to the ride for people with disabilities is at the exit door of the ride! Thus, you don't have to wait your turn for 40 minutes. You only wait until the next round and your accompanying family members or friends would enjoy this privilege too. This allows you to catch a ride of almost all attractions, and even more than once.

Every time I finished a ride and rejoiced the fact that I could go on a ride twice without waiting in a long queue, I caught myself wishing I were healthy and could stand along with other people in the queue. It is a complicated feeling and I always tried to pull myself out of this surge of mixed emotions. ;-)

How to get there: On a regular taxi for 8 euros from the hotel and for 10 euros back. I must say that to walk uphill from the hotel to the park for 2 km is difficult and unrealistic. 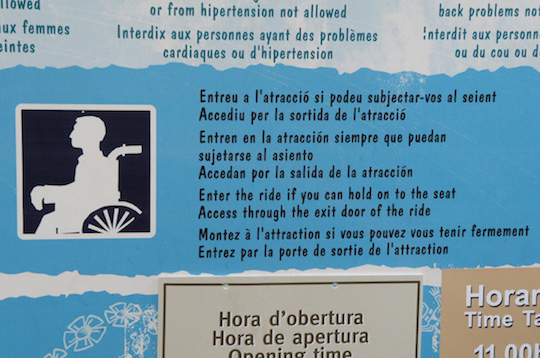 Attention: attractions require guests to transfer from their wheelchairs to the ride by themselves. The employees are unlikely to offer to help. Thus, you must have strong arms or count on the assistance from your accompanying family members or friends. 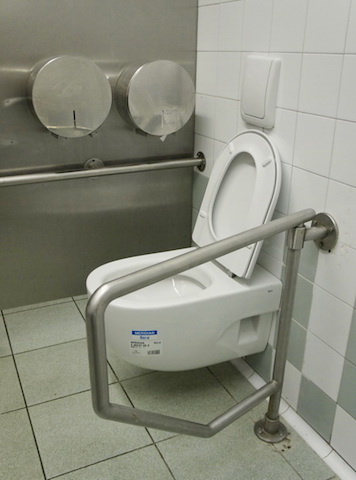 There are accessible restrooms in every themed area: Mediterrania, Polynesia, SesamoAventura, China, Mexico and Far West. The restrooms are perfectly clean, despite the huge number of visitors. 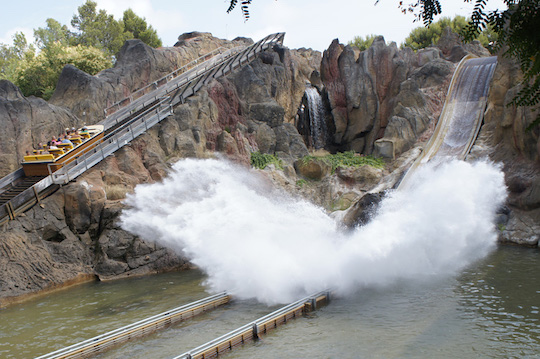 The Tutuki Splash Ride is a great attraction and is suitable for people of all ages. It is quite easy to transfer from a wheelchair to the ride. 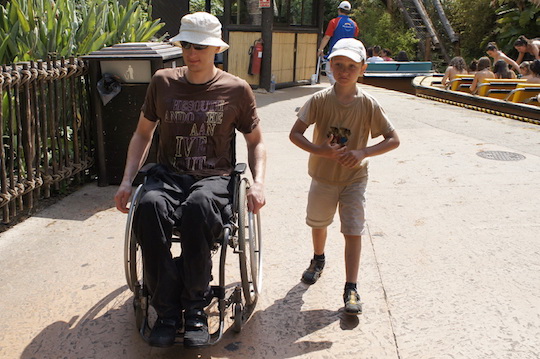 My nephew and I were totally soaked after the Tutuki Splash Ride. 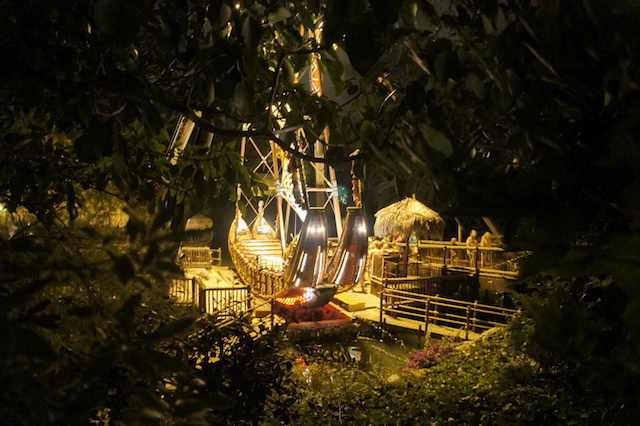 The Kon-Tiki Wave Ride is the only attraction that I don't advise you to go. The hour after the ride I felt heavily sick. This, obviously, spoiled my mood and I didn't want to go on other rides anymore. 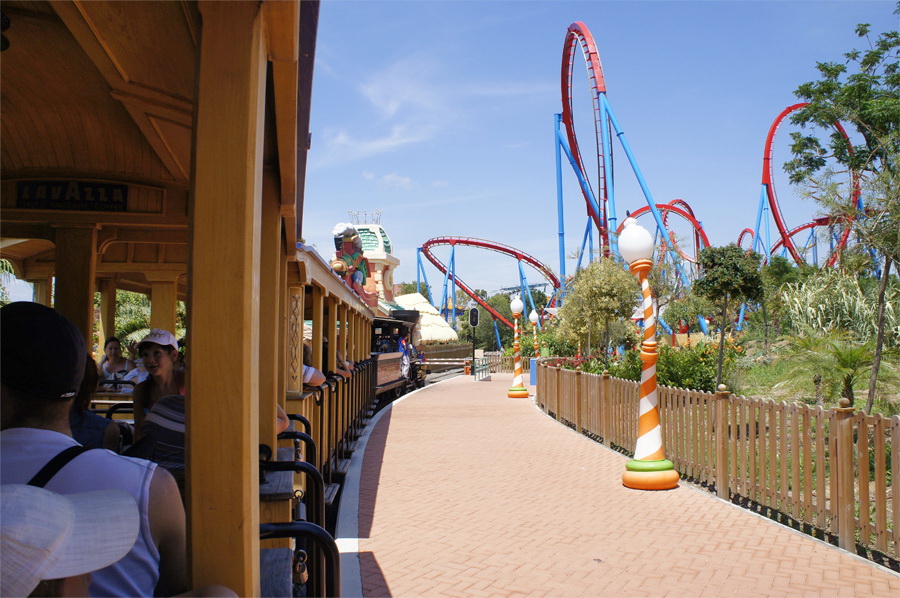 Being exhausted to walk in the heat, we decided to take a ride on an old locomotive, which runs through all the themed areas. I climbed inside and for some reasons, I decided to leave my wheelchair on the platform. The locomotive was traveling so slowly and made lengthy stops, so our journey took about 40 minutes to return to the same platform. Otherwise, we could get off elsewhere. I must admit that it is not a convenient form of transport. It is easier to walk to your destination than to ride the locomotive. 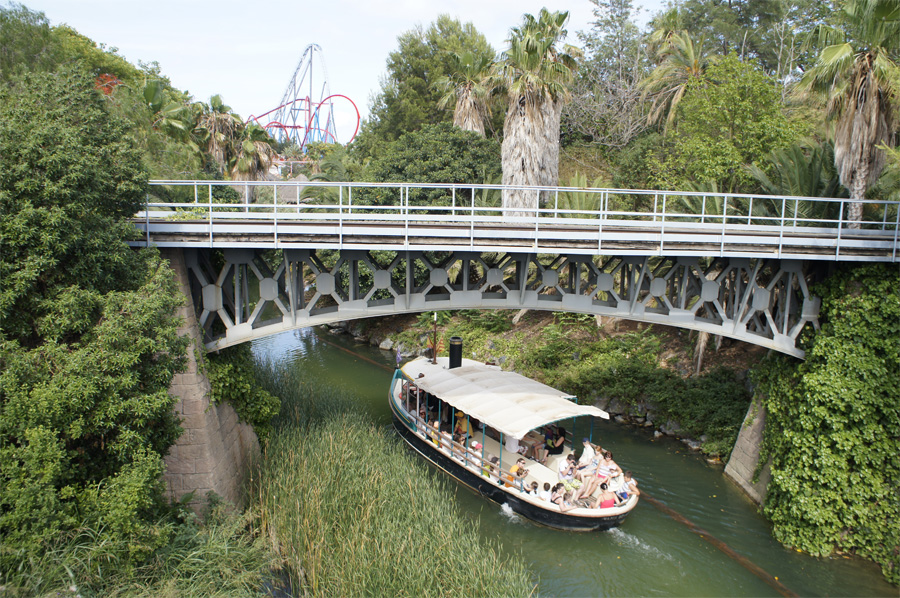 Besides the old locomotive, there also runs a boat, which is not designed for wheelchair users. However, with some help, I was able to climb inside and take my wheelchair with me on the boat. The boat trip takes around half an hour. However, there is nothing beautiful to see except the vegetation. Thus, it could be also a waste of time. 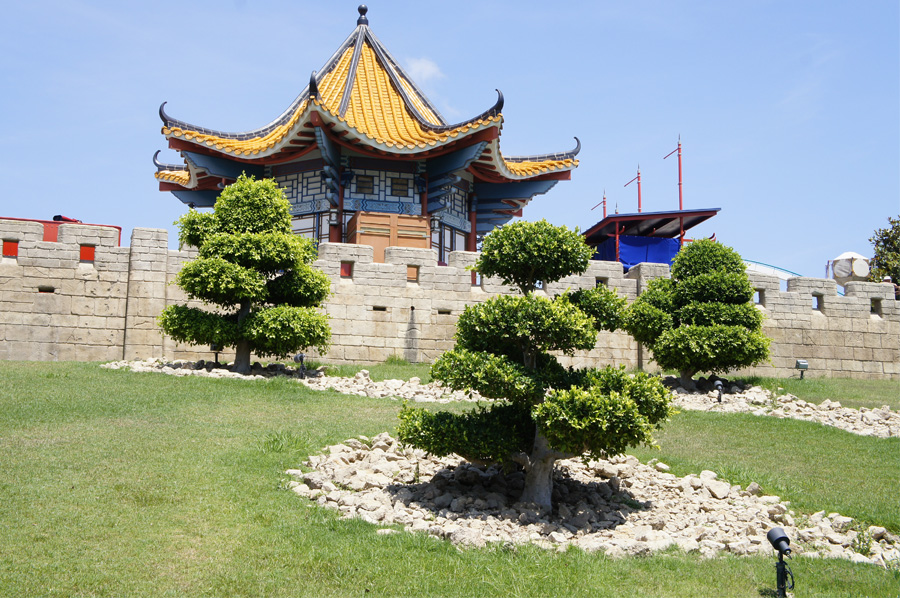 The view on the themed area "China" from the old locomotive. 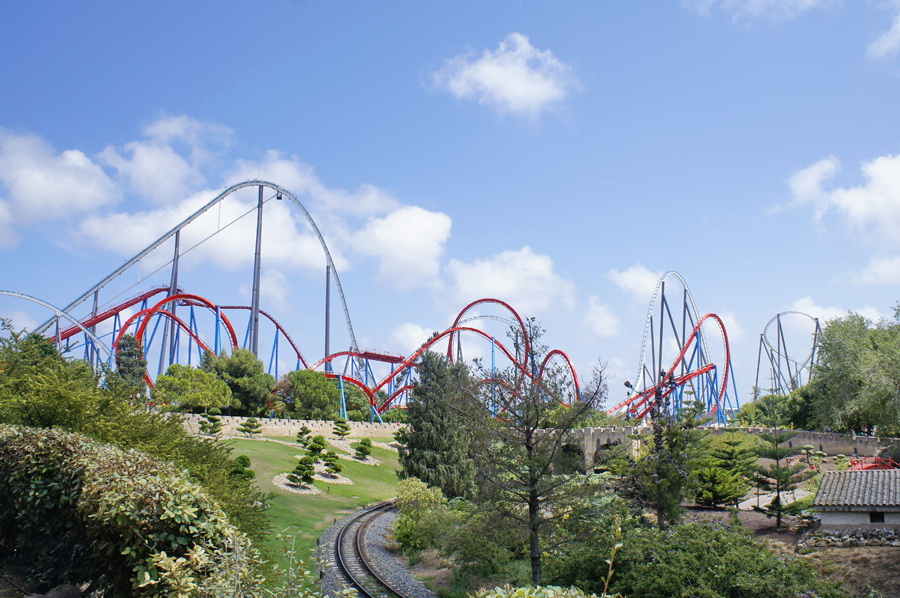 The two steepest roller coasters: Dragon Khan - the smaller one, and Shambala - the steepest and the highest roller coaster in the Port Aventura Park. The Shambala is for the elite troops - the craziest and most desperate tourists. The official website states that these rides are accessible for disabled guests. I do not know which people with a disability they have in mind, but I have decided not to go, because it is not clear to me how they secure my paralyzed legs for the ride. 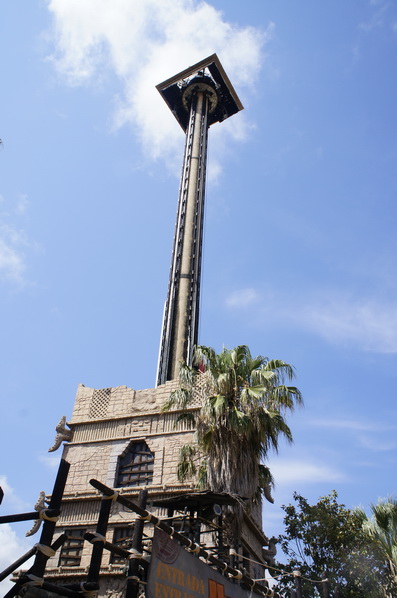 The Huracane Condor Ride slowly lifts you to the top of the tower and stops completely at 100 meters high and when you least expect it, the sharp fall starts. This is the steepest ride I dared to go.

At the very moment when the fall begins from the highest point and you have already reached just two meters away from the ground BUT your spirit is still hovering in the sky, the camera makes a shot. If you like, you can buy the photo with your skewed face of fear at the ride exit. ;-)

I was frightened when it began to fall. But I became even more frightened when I noticed that my legs strongly lifted up due to the acceleration of a free fall. Firstly, I was thinking how to prevent my legs from dislocation and secondly, how to prevent my shoe from falling on somebody's head. I did not want to overshadow someone's holiday with a shoe fell from the sky. While I was overcoming these fears — we've landed. Undaunted by the rapid descent, I simply rushed to the exit. It is amazing how many thoughts can shoot in your head just in a few seconds of falling, and while in a normal state, thinking about these takes much more time. 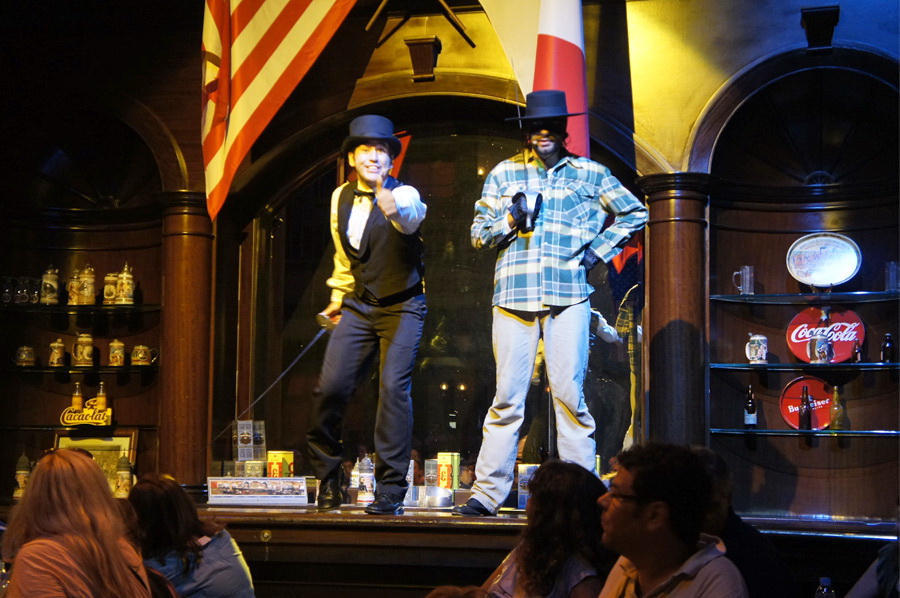 The evening show while waiting for the fireworks.

The parade of all artists and representatives of different themed areas begins at around 23:15, and at 23:45 begin the fireworks.

On the first day, we arrived at the park quite early in the morning and we were already very tired at 16:00, so we returned to the hotel. On the second day, we decided to go there by 16:00. The weather at this time was not so infernally hot and the park had only a few visitors. Perhaps, most people were as tired as we were on the first day, and have returned to their hotels. Therefore, I advise visitors to arrive at the park in the afternoon, not earlier than 15:00, in order to have the energy to watch the fireworks at late night. 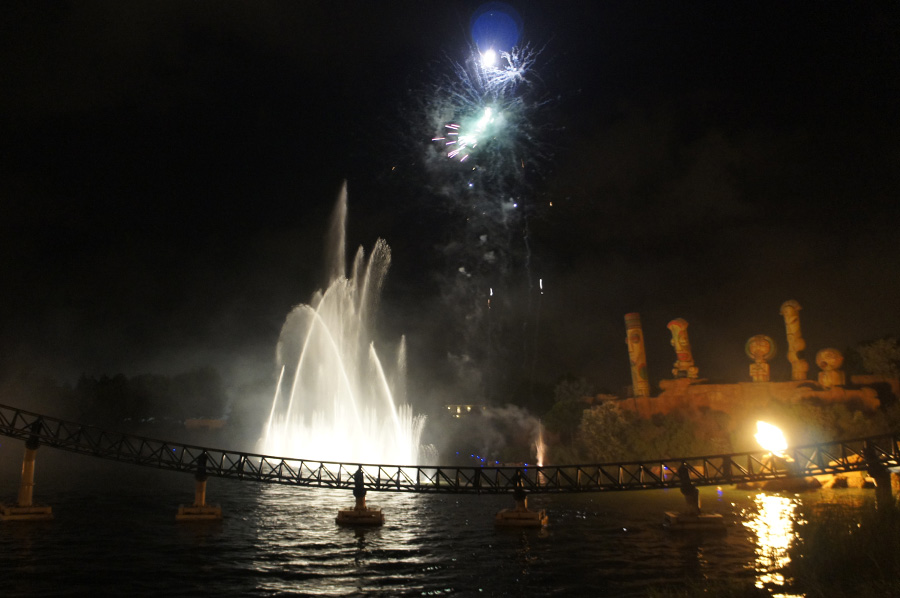 The water show and the fireworks.

After the fireworks, we took a taxi back to the hotel without any problems.

Conclusion: Even if you are not a fan of rides, or you do not have strength to transfer from a wheelchair yourself, the park is still worth a visit for various shows and musical performances in every thematic area. Shows are held several times a day and last about half an hour each.

The Aquatic Park belongs to the Port Aventura Park and is located close to it. The Aquatic Park is quite small although I think this is a plus, because you do not have to run around the acres of parkland from one attraction to another. You can still leisurely get around, and thereafter relax tanning on the loungers. 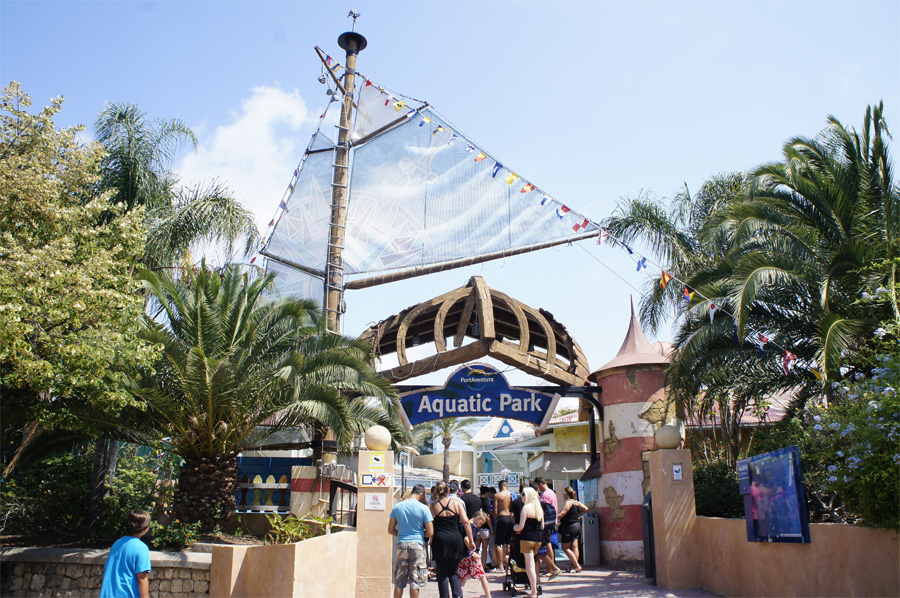 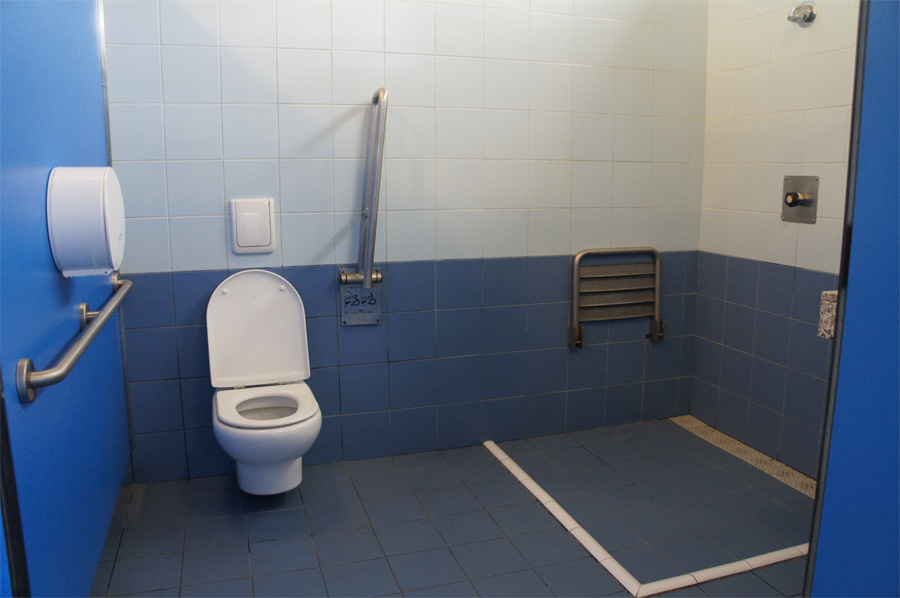 The toilet with a shower is accessible for guests with limited mobility. 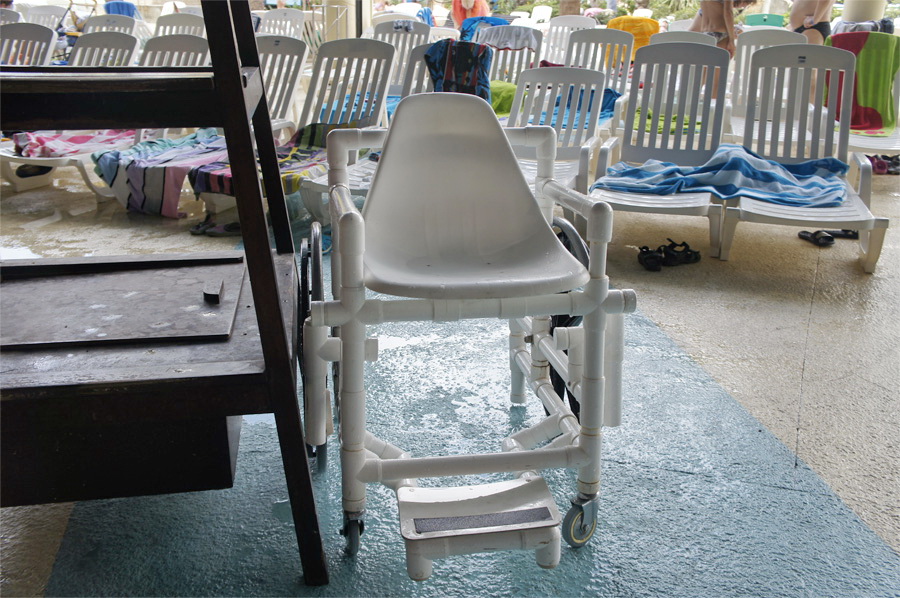 "Throne" for the entry into the swimming pool. I must say that it is not a very comfortable chair. 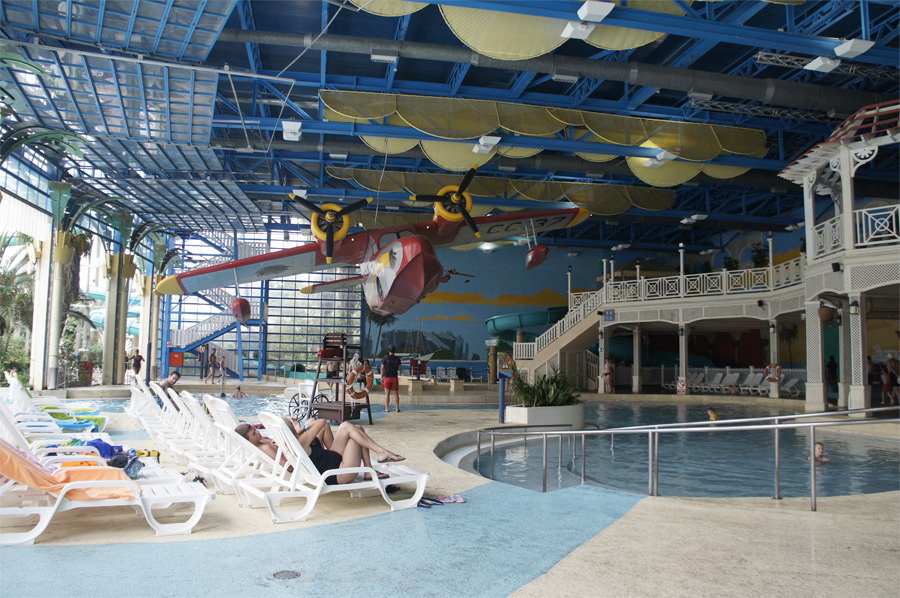 With the help of lifeguards, you can go to the pool, transfer to the rubber ring and swim on the "river" El Rio Loco, which goes around the aqua park. 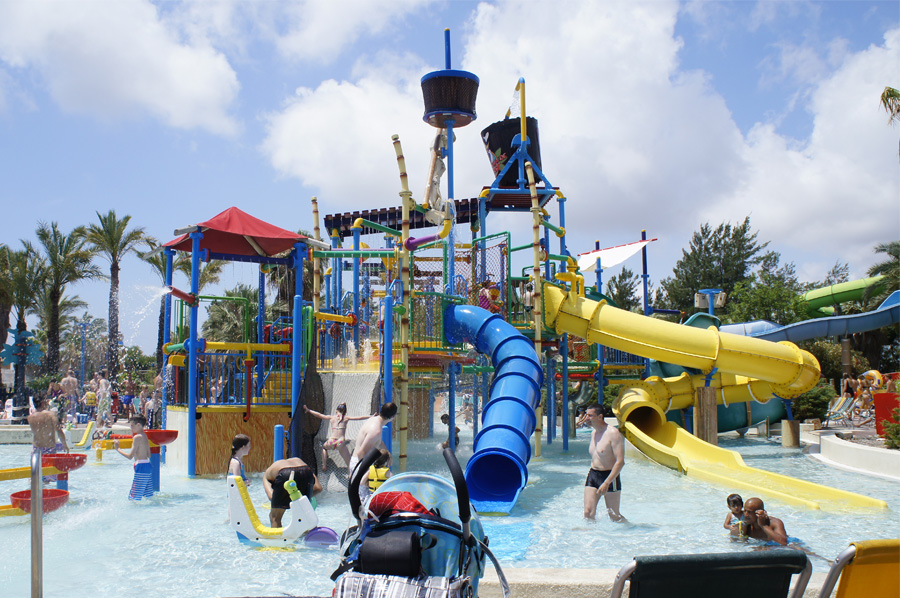 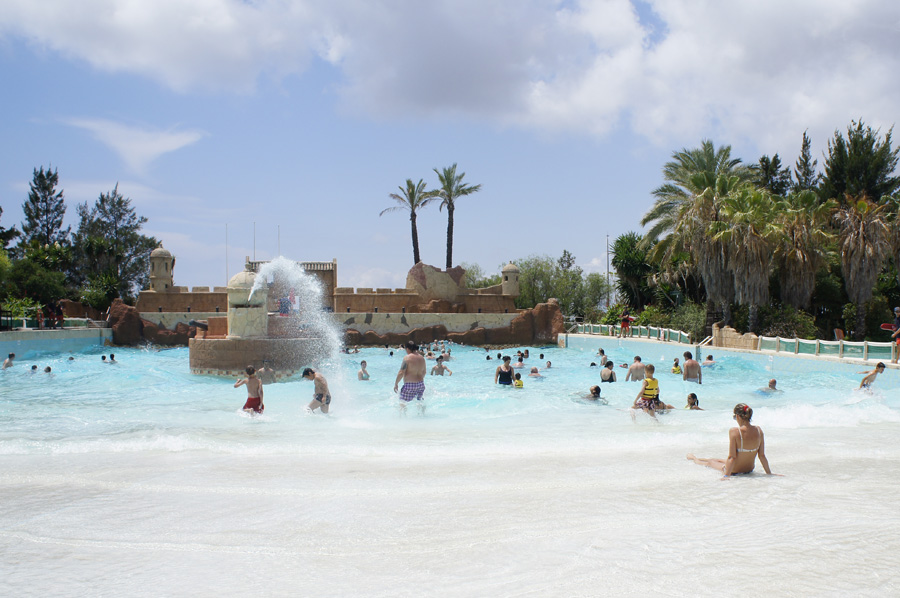 I really liked the Aquatic Park primarily because of its small size and the number of visitors, most of whom perhaps were in the Port Aventura Park, sightseeing or sunbathing on the excellent beaches of Salou.

How to get there: From the Port Aventura Hotel you can take a taxi for about 30 euros each way or a city bus 'Bus Plana'. We decided to take a bus with a pass for 10 trips for 12 euros. All buses are fully accessible for wheelchairs, including the electric wheelchairs. They have a folding ramp and a special area in the middle of the cabin. In fact, it is the only available transport for those who are in electric wheelchairs and who cannot use the services of a conventional taxi. I must say that I have not seen a special accessible taxi during the trip. From Salou to Tarragona takes about 40 minutes and buses run every half hour.

The bus arrives at the bus station, located at the center of Tarragona. In a circular area of Imperial Tarraco, there are 8 streets which lead you to different attractions. The important thing is to get on the pedestrian boulevard, called the Rambla Nova. It leads to the pearl of the city - the "Balcony of the Mediterranean". 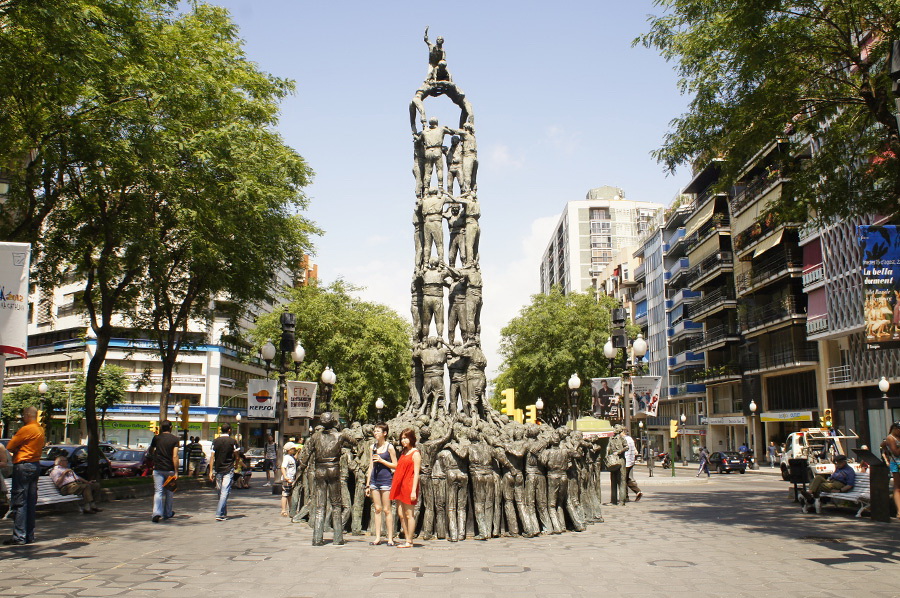 On the Rambla Nova street is a monument of Castels - a human pyramid, and Casteleros - people who form the pyramid. 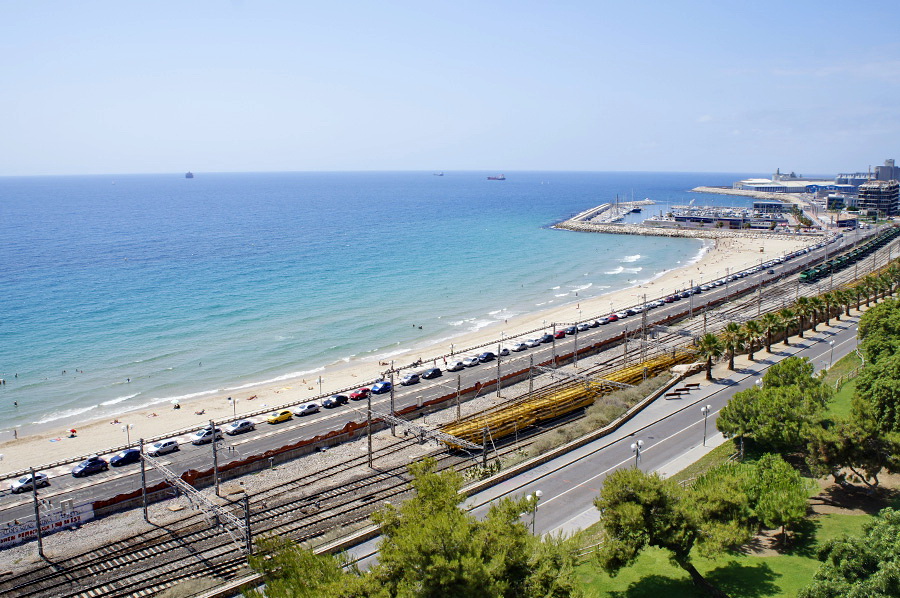 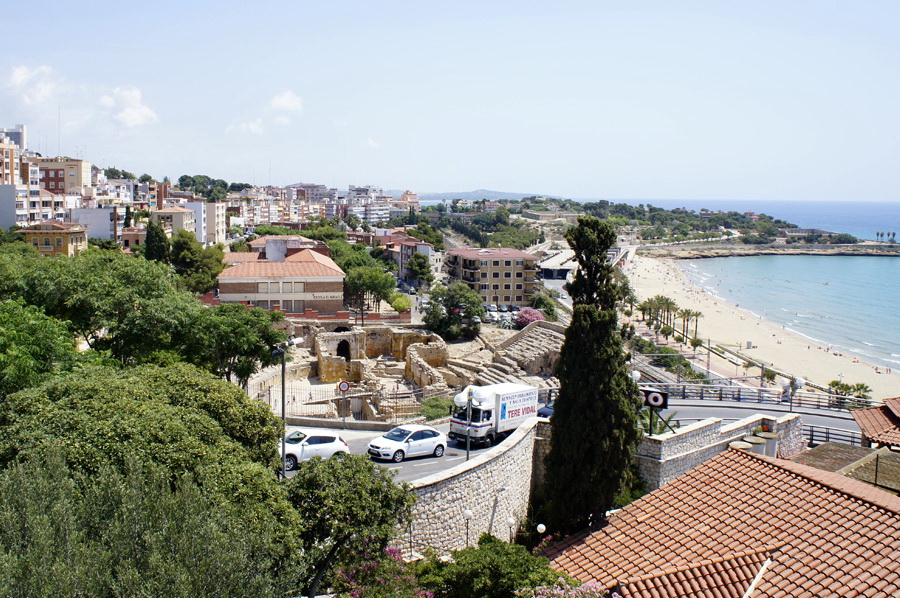 The Roman Amphitheatre built in the second century AD, with a capacity of 12,000 spectators. 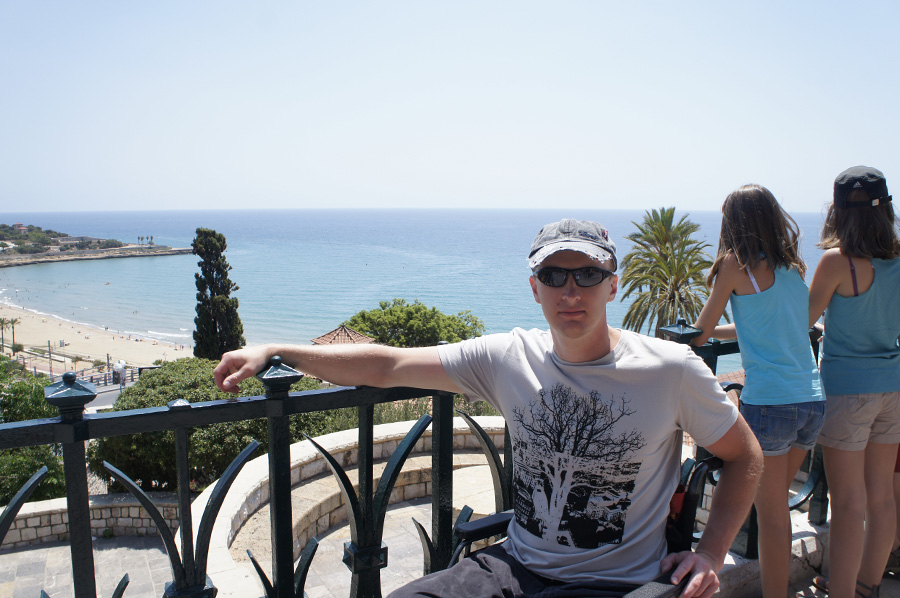 I am against the background of the Roman Amphitheatre. 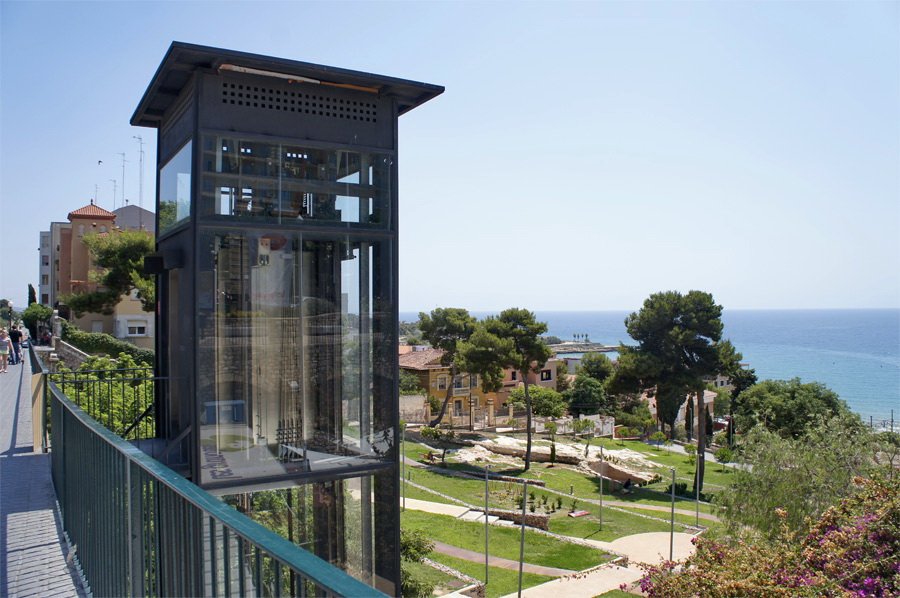 The elevator to descend to the Amphitheatre. 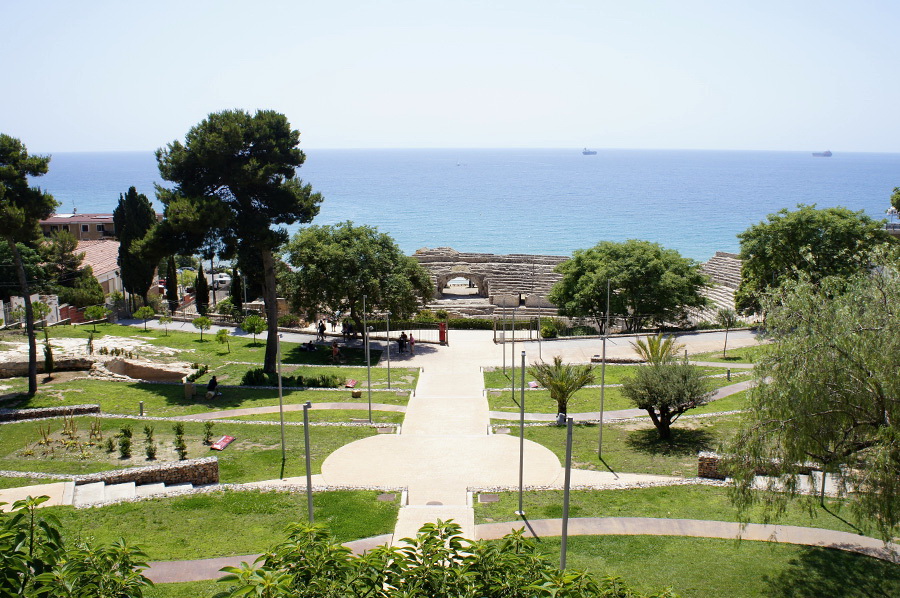 Moreover, walking along the Rambla Nova, we saw an information kiosk. There we decided to take a city map and find out more about the accessibility for wheelchairs around the city. It was very nice to meet an employee who spoke good Russian with such a great pleasure, and particularly without an accent. He told us that the so-called "Old Town" is not accessible for wheelchairs. However, I did not believe that and decided to check it out... Well, the employee was right - the Old Town is not accessible for wheelchairs and we just wasted time. 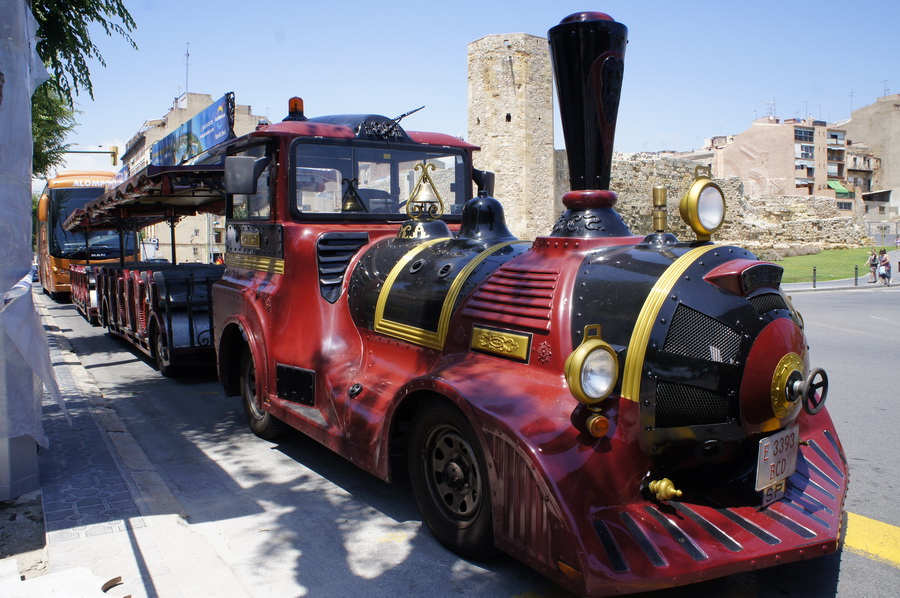 After an unsuccessful assault of the Old Town, we decided to take a small locomotive that runs around Tarragona.

The locomotive is not accessible for wheelchairs, so I had to climb on board with extra help and put the wheelchair next to me. The ride is accompanied by an audio guide on 7 languages and it costs 7 euros per person. It runs along the beach, through the port into a modern city, passes through the Old Town and returns to the point of origin - to the Roman circus and Amphitheatre. 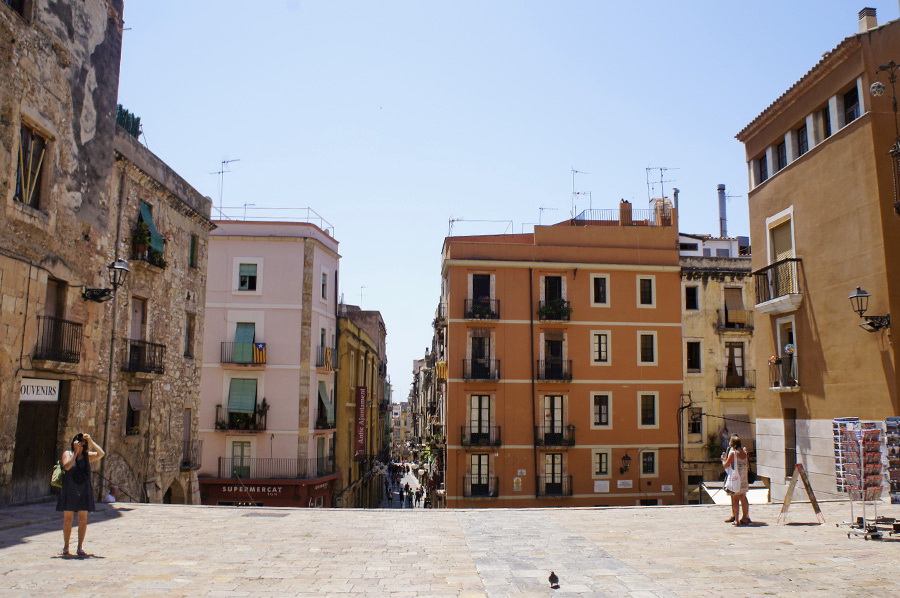 The streets of the Old Town. 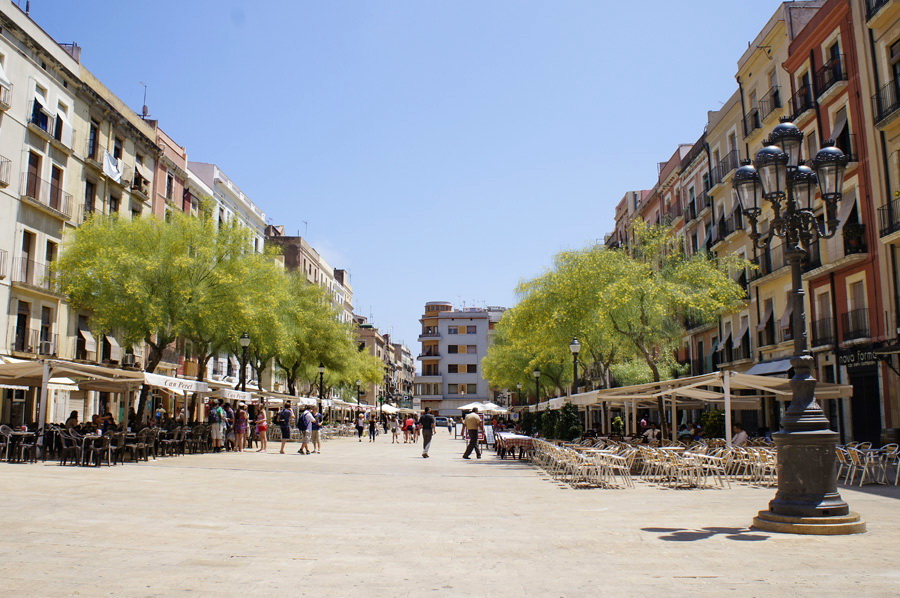 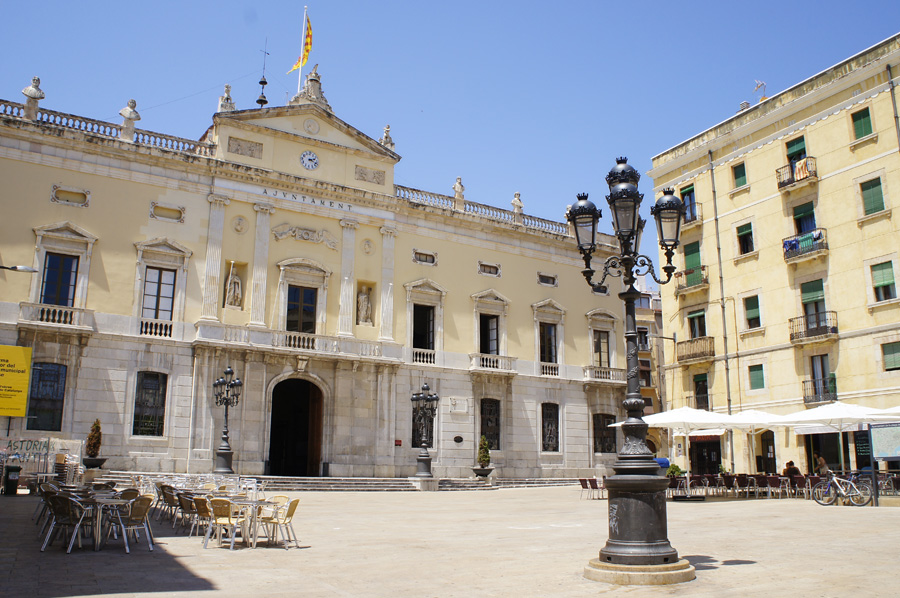 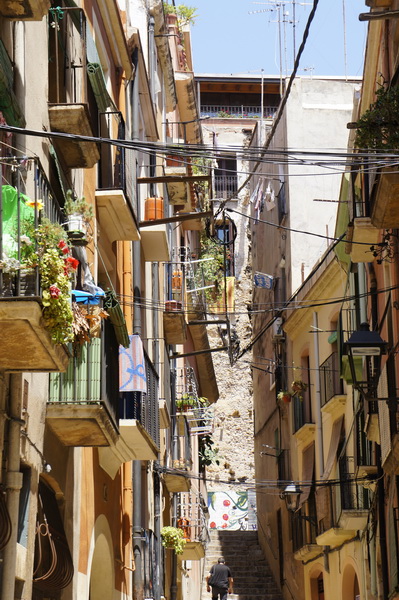 I fell in love with this amazing and beautiful city!

Summing up, I must say that I was quite upset with the poorly adapted bathroom in the hotel, the accessible beach that had no changing rooms for people with a disability, and the lack of shower for rinsing after swimming in the sea. However, I really liked the mild climate in Salou, the wheelchair accessible Port Aventura Park, and I fell in love with the beautiful city - Tarragona, its ancient streets and the view of the emerald sea from the "Balcony of the Mediterranean".

fritz.vischer_o
This comment was minimized by the moderator on the site
A fantastic report. Thank you very much, Evgeniya, for translating it.