Who hasn’t dreamed of a fairytale wedding and seeing the world on their honeymoon? Maybe not many men do but certainly many girls do and Fang Ling, a girl from Taiwan who became paraplegic since she accidentally fell from the staircase during a business trip in 2010, did not only dream about her honeymoon but recently realized her dream with Yang Yun-hao, the man of her life who also suffers from spinal cord injury (SCI) due to a serious car accident happened three years ago.

It was love at first sight for both Ling and Yun-hao when they first met about two-year ago at the Development Center for the Spinal Cord Injured (財團法人桃園市私立脊髓損傷潛能發展中心). They fell in love and last year, they decided to get married on September 12th – turning the memorial day of Ling’s injury to the happy wedding anniversary for the loving couple. The couple did not have a fairytale wedding ceremony. Instead, they took off on March 9th this year with two other abled friends of the Development Center to fulfil Ling’s honeymoon dream – touring and taking wedding photos around Taiwan, their home country, with wheelchairs and bikes. 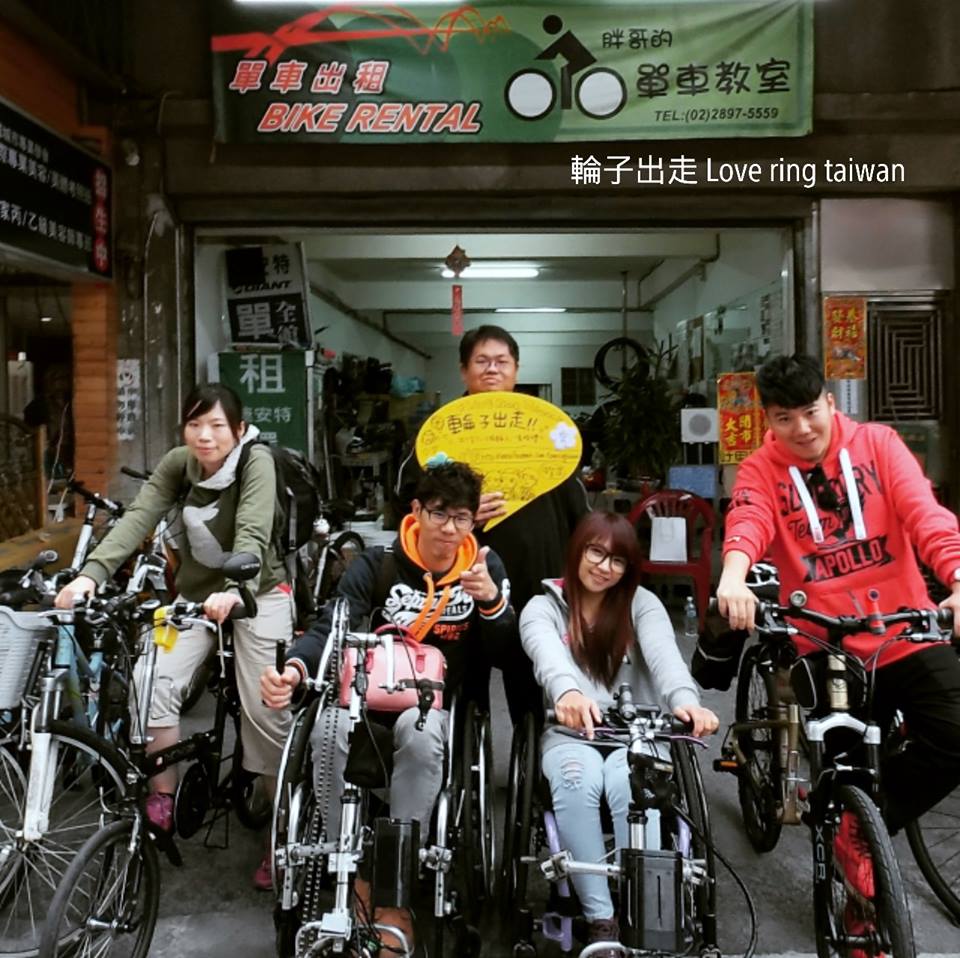 Gear up! – the day before Yun-hao (second left), Ling (second right) and their friends went on their 25-day trip around Taiwan.

Recently I had the pleasure to talk with Ling and Yun-hao on phone and learnt more about their extraordinary honeymoon adventure.

SCI couple touring around Taiwan: difficult but not impossible

Taiwan, an island nation with 22 administrative divisions famous for its nature, simplicity and hospitality, is a popular tourist destination. It has also become the recent favorite destination of wedding photoshoots for Asian couples. Naming themselves “Love Ring Taiwan  輪子出走”, Ling, Yun-hao and their two friends finished their round-the-island trip in 25 days setting foot in every single administrative division in Taiwan. Recalling their journey, Yun-hao said, “we trained ourselves for more than an hour each day before the whole trip – pushing the wheelchair, rolling up the slope. Originally we’ve planned for more attractions but eventually we were still travelling slower than we thought. That’s why we changed our plan to visit only one attraction for each division.” During the 25 days, they travelled with their scooter-wheelchair, handcycle and bikes on their own with only one or two exceptions that people drove them to their destinations. Most of the time they booked their accommodation on their arrival day. They mentioned that not every hotel or hostel offers wheelchair-friendly facilities but they were able to overcome the difficulties with the help of their friends and the friendly people met during the trip. “There is never a place which is totally obstacle-free and we have learnt to express our needs and that is very important. In most situations, people are willing to help as we ask politely,” Yun-hao said. 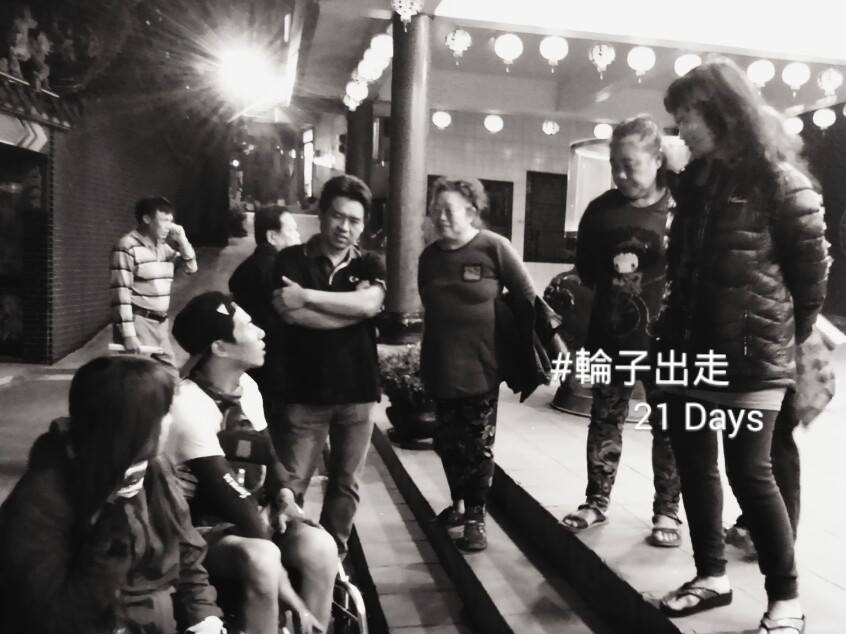 Out-of-battery: Yun-hao and Ling chatting with the villagers while charging the wheelchair at a temple in Ruifang District.

The 25-day journey is the first proper trip the couple had together since their injuries. They shared with us their many exciting first experiences during the trip. “We had our first paragliding experience. Suit up, wear our helmet and just like that, we went paragliding in our wedding dresses! We felt really hyper,” Yun-hao and Ling said. 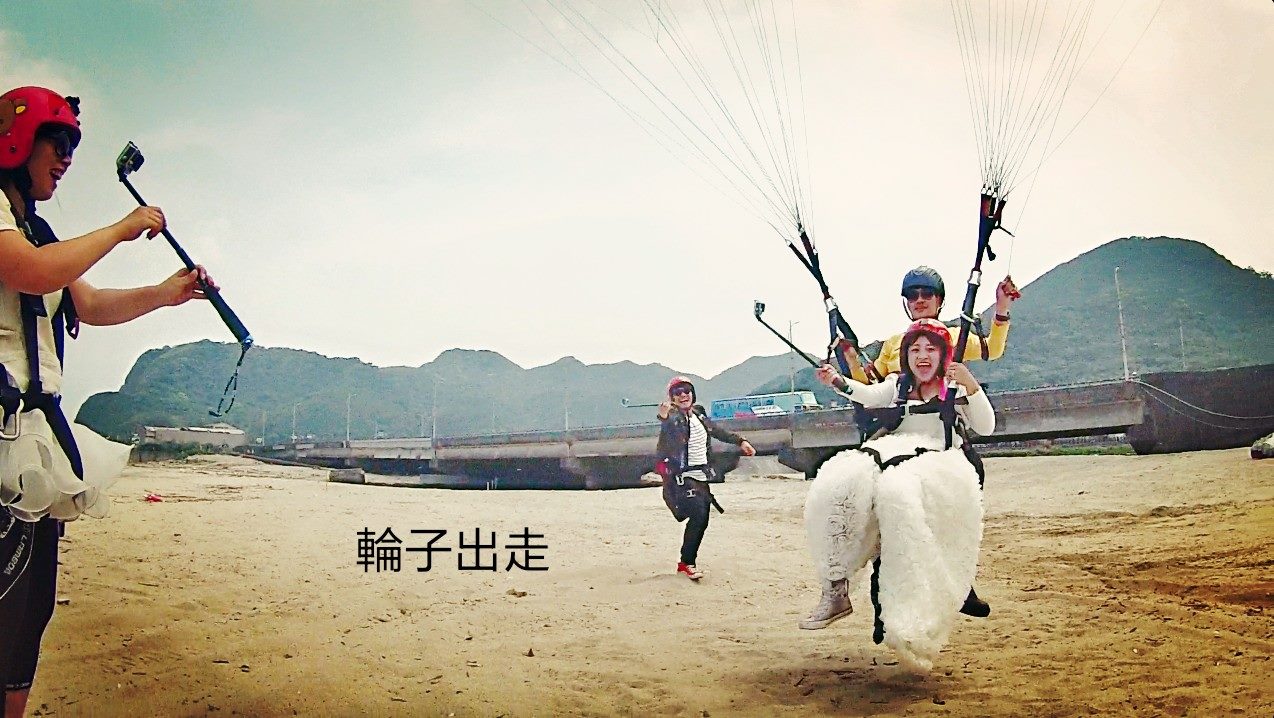 “Yeah! We did it!” : Ling cheered for her first skydiving experience…and in her WEDDING DRESS!!

Diving was also the couple’s first experience. With the help of three coaches, they dived 10-meter deep into the water at Kenting - the first national park of Taiwan and a popular destination for water sports and activities. Yun-hao learnt how to swim before the injury but expressed his insecure feeling to swim after the injury; Ling has never learnt swimming before. Nonetheless, they both enjoyed the exciting experience of diving. 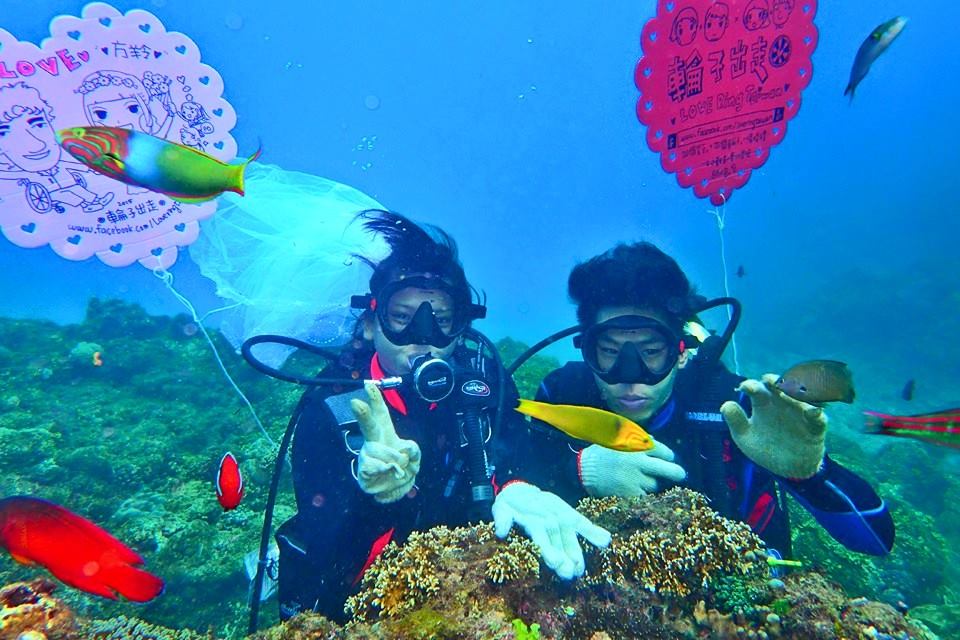 First experience: Ling and Yun-hao dived 10-meter deep into the water at Kenting.

Another highlight of the trip would be the couple participating in the patron goddess wedding ceremony (known by locals “Ta Chia Jenn Lann Gong Wedding”) at the Chenlan Temple in Taichung. The ceremony was considered one of the biggest annual cultural events in Taiwan. During the ceremony, 99 pairs of couples get married under the witness of Mazu - the Chinese patron goddess who is said to protect fishermen and sailors. With their unique love and adventure stories, Yu-hao and Ling did steal the spotlight at the ceremony. The couple said this massive traditional wedding ceremony has been one of the most precious and unforgettable memories from their trip. 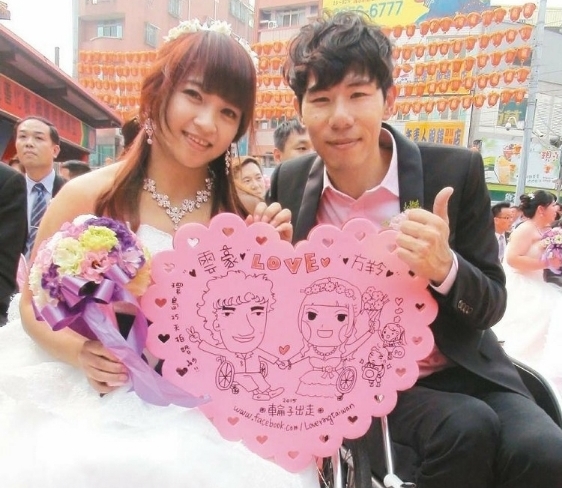 Married “once again”: Ling and Yun-hao joined the patron goddess wedding ceremony with 98 pairs of couples at Chenlan Temple in Taichung. 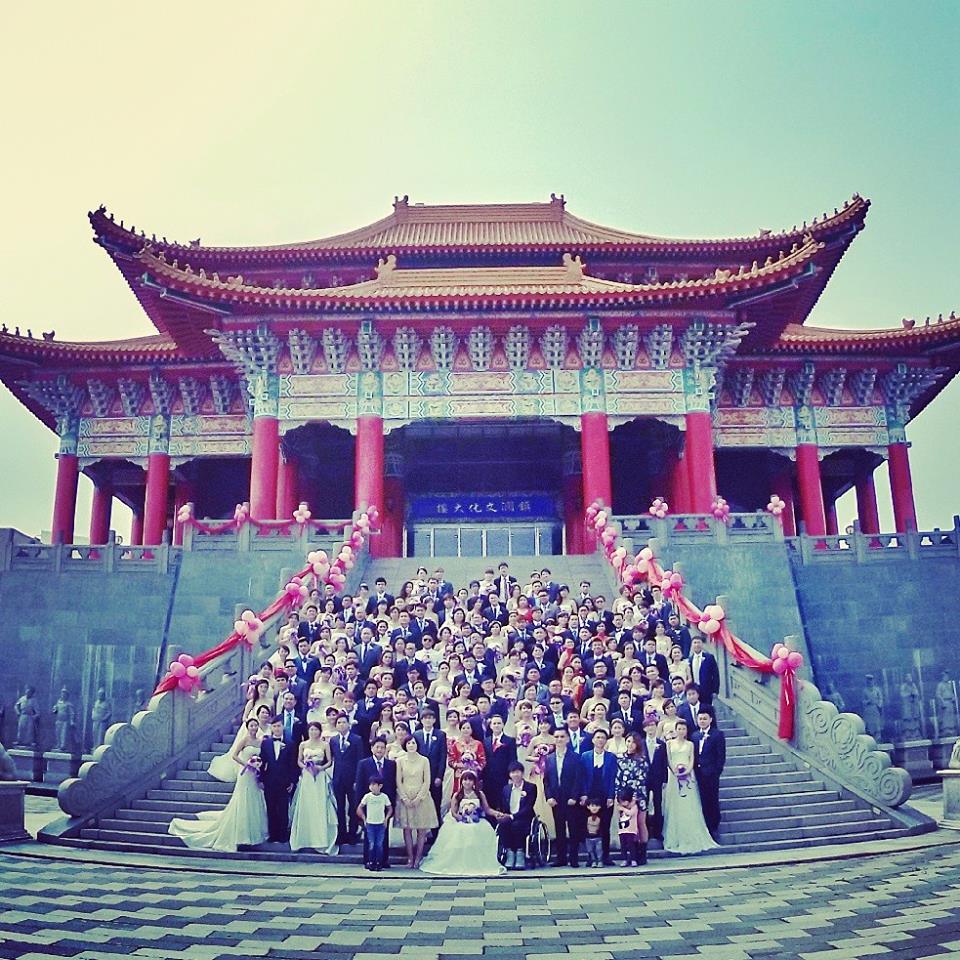 The 99 blessed couples: could you find Ling and Yun-hao?

From impossible to “I’m possible”

While I was thinking a 25-day honeymoon round a country must have cost a fortune, Yun-hao shared with me the heartwarming truth, which is really impressive. “We did several street performances during our trip,” he said, “sometimes when there were children around, I made a variety of balloons for them, and Ling would sing and play her guitar. It was more for having fun than making money. The crowds were so supportive that we eventually received enough donations for our performances to cover the spending of the whole trip!” When asked if they could complete the trip with just the two of them, both Ling and Yun-hao had no hesitation and answered, “yes! Certainly! It could take more time but it is not impossible.” They are both thankful for their accomplishment. 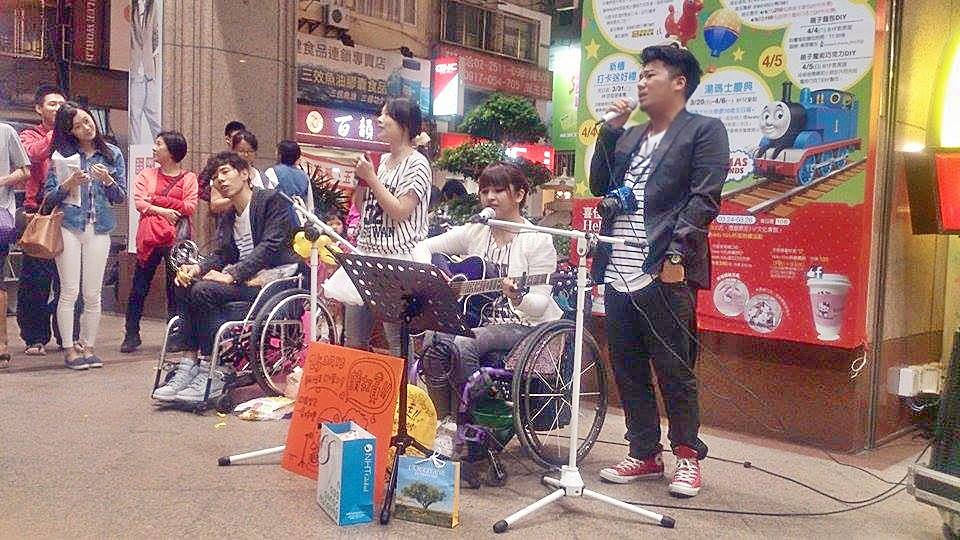 Music says it all: Ling wrote and performed a song about herself with Yun-hao and their fellows on the street in Kaohsiung. 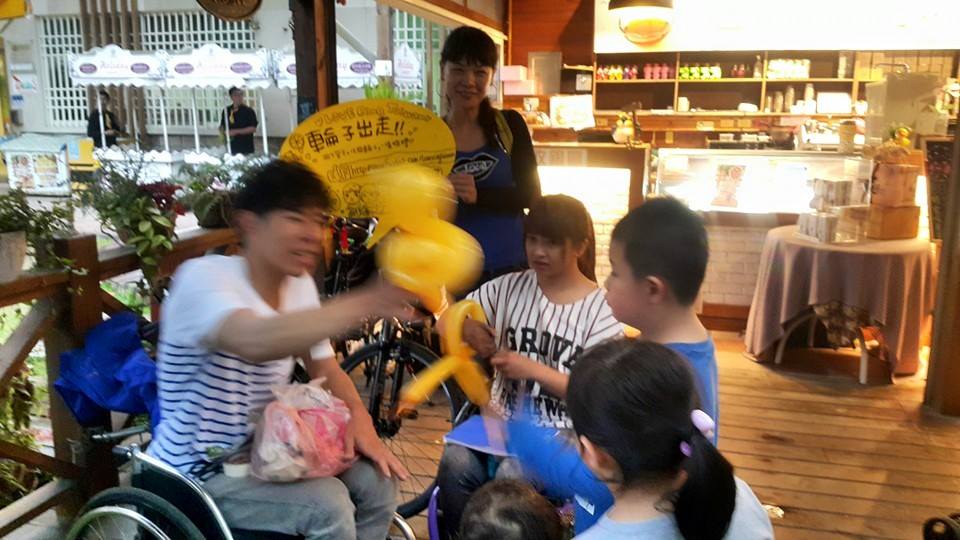 Support, Care, Infinity: Ling and Yun-hao at one of the street performances during their 25-day trip, making balloons for children.

With the help of friends and their persistence, Ling and Yun-hao transform from not knowing where to visit and take wedding portraits to making wonders and administering their “Love Ring Taiwan” facebook page with more than 7500 likes. They showed us impossible is nothing, “we met other SCI patients on our trip. They all refuse to bow to fate. They play snooker better than normal people; they bake very delicious cakes; the websites they create are nicer than many others; they never give in because of their physical disabilities and even work at farms early in the morning with their families.” Yun-hao finally added, “people tend to be afraid of the roads ahead – what could happen – and think why things never seem to work out for me? But you gotta try, face the problem and solve it. This is how we learn and move forward!” 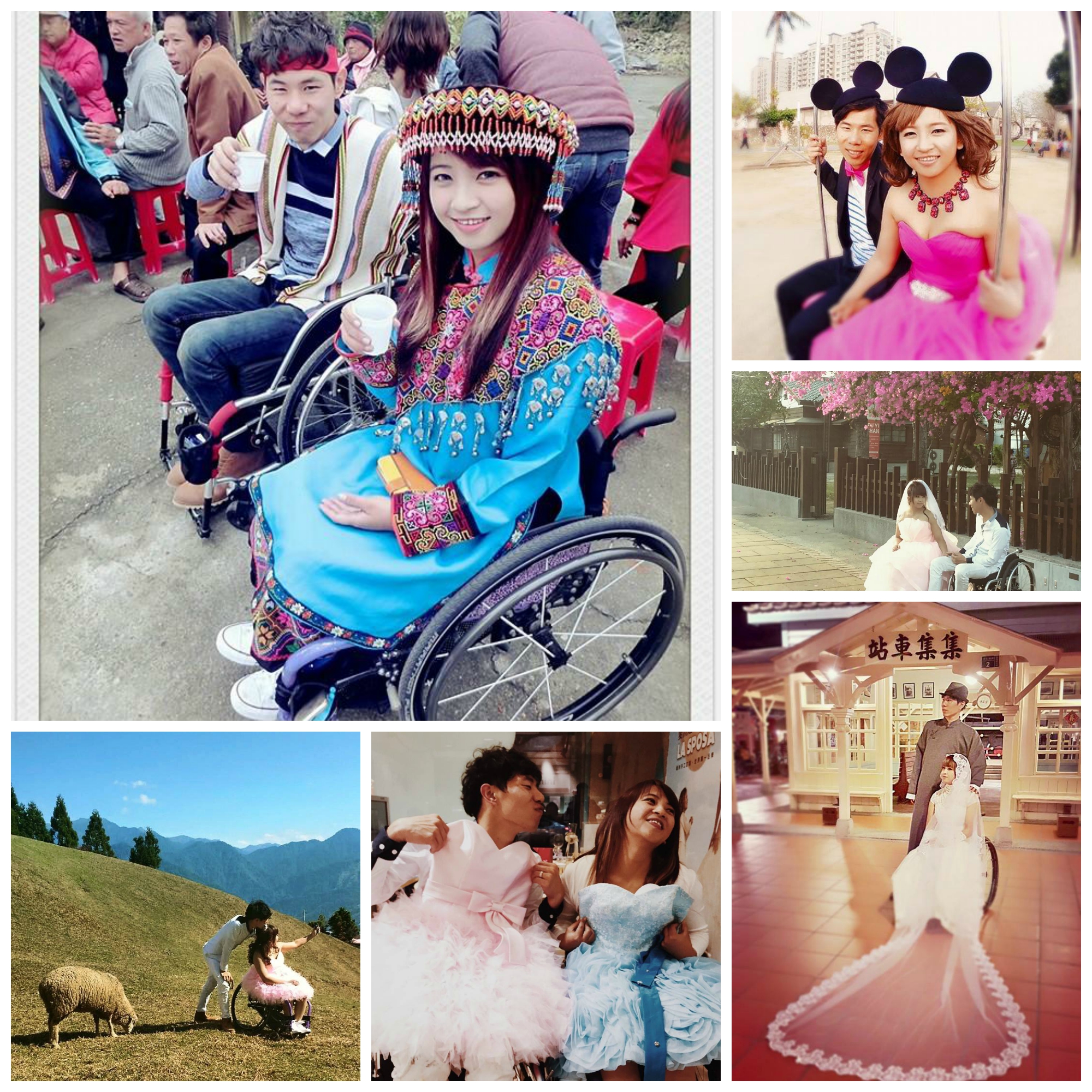 A dream comes true: unlimited by their physical inabilities, Ling and Yun-hao completed their 25-day journey with love and pleasure.

The “Love Ring Taiwan” journey ended but this is certainly not the end of Ling and Yun Hao’s story. You may revisit their extraordinary honeymoon journey and find their updates on their facebook page here (in Chinese only).