Sports and the media: a love affair through and through?

Research in the area of sports journalism has gained in importance during the last three decades. The majority of the studies criticised sports reporting for using metaphorical language, underrepresenting women, lacking background information, but also for the high focus on the individual person (personalisation) as well as on only a few disciplines. Marginalized sports, and sports for disabled people in particular, are underrepresented in the media and compared to popular sports they are only rarely associated with high-performance sports.

The media should not be underestimated when it comes to sources of information about the life and capacities of people with disabilities, and sometimes they are indeed the only source. Media sports also have a “social function” because they facilitate the identification with athletes as well as emotional relationships which are also called “parasocial relationships”. Especially personalisation in the coverage about sports serves as an important basis for the reader's identification process. The reader can then relate to the positive portrayal of the athletes’ characteristics.

The initial point for a research study conducted at Swiss Paraplegic Research was the presumption that there are significant differences with regard to the media coverage about athletes with and without disabilities. On the basis of different theories, researchers analysed all sports articles on the Paralympic and Olympic Games in Beijing 2008 which were published over a period of eight months in the German-speaking Swiss daily and weekly newspapers.

The results showed that the media conveyed a rather biased image of the Games. The number of articles in German-speaking Swiss newspapers about the Olympics was three times higher than about the Paralympics. Differences within the genre could be found with regard to content, form and layout of the sports coverage. Newsflashes and short news articles characterized the media coverage about the Paralympics. In the case of the Olympics, however, the spectrum of various formats such as reports and ironical comments was substantially larger.

Every fifth report on the Olympic Games mentioned also athletes from other countries and the successes and records of high flyers Usain Bolt and Michael Phelps were particularly popular. The media coverage of the Paralympics was mainly in light of a national context, since the press exclusively reported about Swiss achievements but ignored the successes and competitors from other countries in the news. In addition, brilliant results were needed for being featured by the media. Compared to the Olympics, an “Olympic diploma” (forth – eighth place) was not good enough. At both Games the focus regarding images and texts was on sports performed by male athletes – only every fifth image featured a woman.

The reasons for lacking attention of the media coverage of the Paralympics might have been missing factors like “popularity” and “attractiveness of the athletes” (prominence). In the study the researchers therefore also focused on the factors of personalisation within media coverage.

They found out that individual “fate” and “coping in everyday life” were included in the reports about the Paralympics only (see chart 1). Based on the examples of the two race-bikers Heinz Frei (Paralympics) and Fabian Cancellara (Olympics) these preferences could be well observed. The personalisation of Heinz Frei was mainly constructed through disability-typical categories like “fate” and “coping in everyday life”, whereas in relation to Cancellara, topics like character, family etc. were cited. 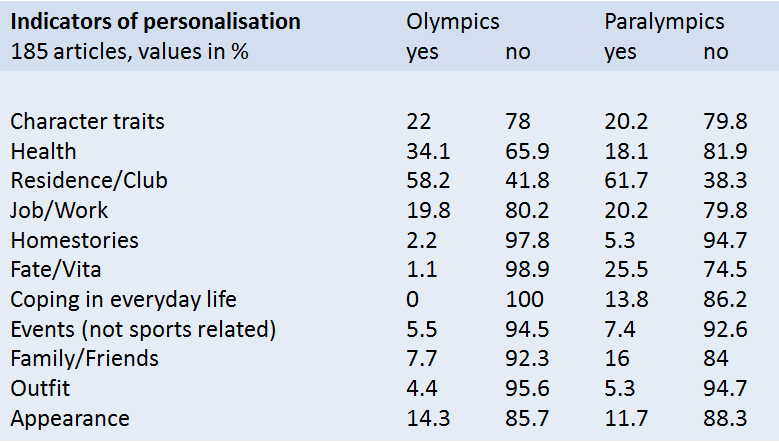 For athletes with a disability, the grade of prominence and personalisation should be increased, so that their sport can gain wider public recognition and, moreover, that important marketing-relevant parasocial relationships can be facilitated. Stories of fate and drama should not constantly be employed to generate media exposure or advertising revenues, as is the case in the five-times gold medal swimming champion Natalie du Toit: “It’s not the medals of the Paralympics that bring in sponsors and attention. I know that it’s my character and my story, that are fascinating.”

Representation of athletic performances and of success in the media

Another fundamental aspect of media sports coverage is the analysis of the athletic performance. The study clearly showed that the performance aspects were less discussed in the articles about the Paralympic Games. The researchers tested the appearance of terms and topics which are often used in relation to high-performance sports, like “performance goals”, “professional”, “training units”, “coach” etc. At the Paralympics, these were mentioned 1.02 times per article on average which was considerably less than at the Olympics with 1.66 times.

A similar approach could be seen in the concrete in-depth analysis of the respective athletic performances (see chart 2). Frequently mentioned success criteria in terms of Olympic media coverage were the preparation for a competition, the conditions on the competition day, and the other starting competitors. The articles about the Paralympics, however, reported such success criteria substantially less often. 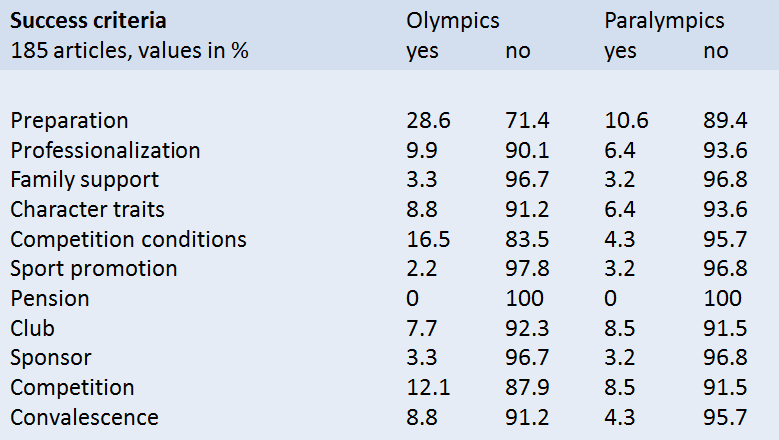 Through the medially induced appreciation of the athletic performance – and not of the person's fate – athletes with a disability are rewarded for the efforts to achieve their goals. Heinz Frei formulated this very accurately: “I don't have to defer myself behind a super league soccer player. My efforts are just as intensive and professional, possibly even more substantial. I cannot afford escapades. My body is my capital and therefore I have to manage daily life with discipline and responsibly” (Heinz Frei, 2009).

Athletes with a disability deserve the same attention by the media as able-bodied athletes do. It is important to talk about oneself and to share insights of daily life – however, also athletic performances, successes and the competitive situation should be mentioned by the media.

This study was about the Games in Beijing in the year 2008. Unfortunately, no more updated scientific analysis is available, but there are indications that the presence of the Paralympics in the media has improved since then.