An eventful day at “SPV-Zentralfest”

Community excursion to the offline world

The Community Team has recently traveled to Ticino – location of the Zentralfest of Swiss Paraplegic Association (SPA) (Link in German only). This annual fest is a meeting place for wheelchair club members. It was our goal to meet many new faces “offline” there and introduce them to the Community. In the end it applied: All’s well ends well. 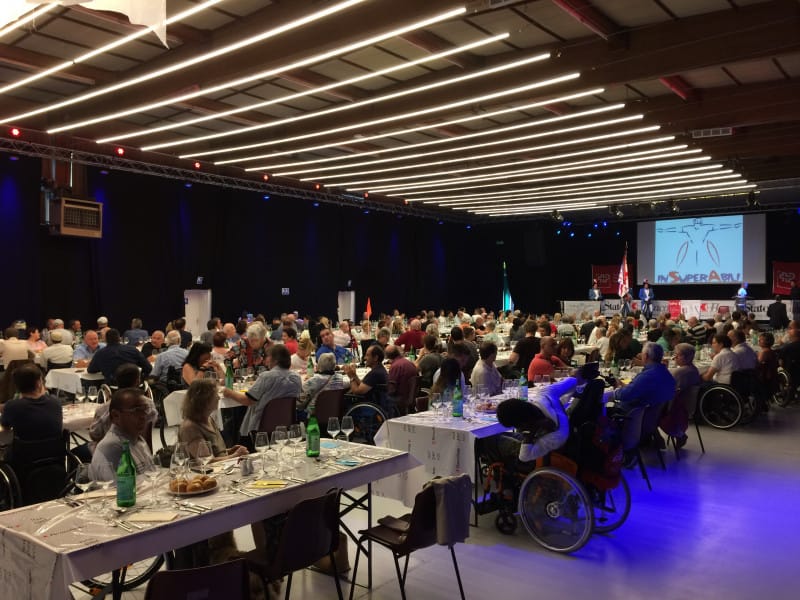 The event did not lack visitors, only daylight ;)

Early in the morning, we left from Central Switzerland. Despite the busy route through the Gotthard tunnel, the trip went relatively smooth: only two traffic jams of 20 minutes each. Shortly after the highway exit near Lugano, the excellent organization of the event became obvious: already the first roundabout had a sign directing us to the event – and there were another 20 minutes to drive! My conclusion (as a German): Switzerland functions also in Ticino ;)

That Saturday the weather was beautiful – that’s what Ticino is famous for. Unfortunately, we were not able to enjoy the sunshine much since the exhibition venue had only artificial light and no windows. But we were full of beans and were eager to get our stand ready for the first visitors.

We thought the day would be a flop

Then, at 11 am, the doors opened. The members of all Swiss wheelchair clubs had received invitations to the SPV-Zentralfest. This year, about 250 people with spinal cord injury and their families attended. This event’s host was the wheelchair club InSuperAbili, which is the reason why we ended up in beautiful Ticino. 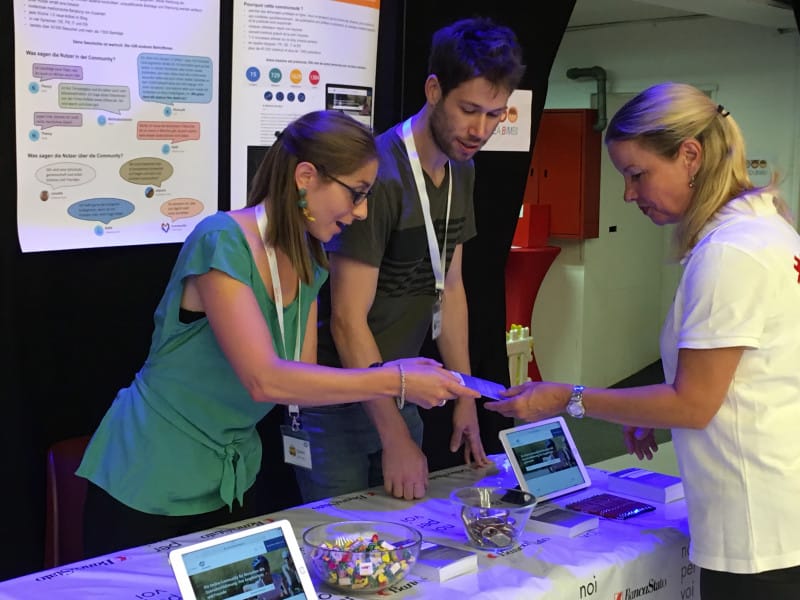 Already when the guests arrived, we noticed that it would not be so easy to catch their attention. Our booth was a little further away from the buffet and most guests were distracted by the delicious food… or, more bluntly: the first hour went by and only two visitors had stopped by at our stand. Of course this dampened our initial enthusiasm slightly. We had every reason to believe that the day would be a flop. However, things turned for the better.

A new plan was needed

We decided to talk to the people during lunch going to their tables – even though it took us some effort. For the Community, however, it was well worth it :smileyhappy: and we were thus able to start a conversation with some of the guests.

Of course, we also got to enjoy the delicious Ticino specialties: rabbit terrine, braised beef with polenta or, alternatively, vegetarian lasagnette followed by Formagella, a Ticino specialty, and eventually a delicious dessert plate. This sweetened our day – which still seemed full of challenges. 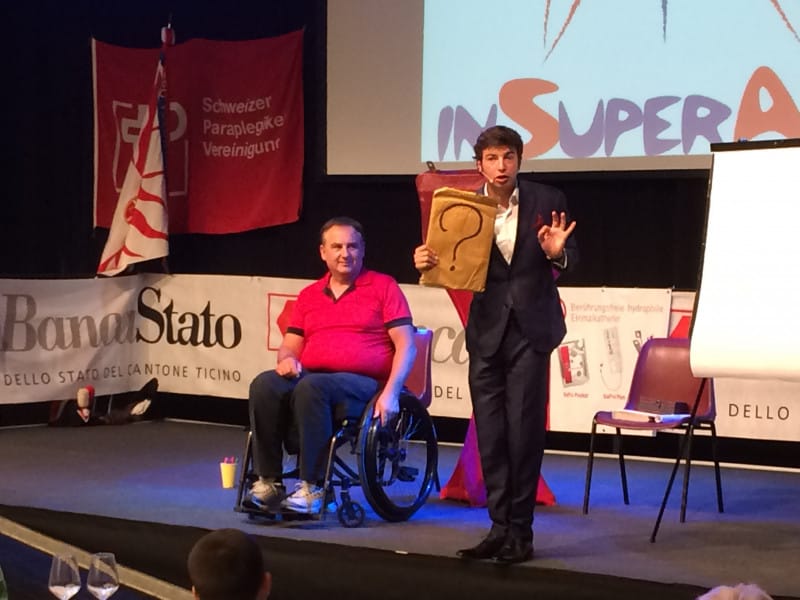 “Mentalist” Federico Soldati enraptured the audience with his tricks

Lunch was followed by entertainment. The magician, also called “mentalist” nowadays, Federico Soldati, enraptured the audience with his tricks. He was indeed impressive: I went close to one side of the stage and, nonetheless, I was (almost) never able to see how he did it.

In the meantime, we started to talk to the person next to us at the table. She was a representative of the company Hollister and also trying to provide people with information material and free disposable catheters at her stand. She was one of the lucky exhibitors who were also invited to present their products on stage. When she learned that we also would have liked to present the Community more comprehensively to the visitors, she spontaneously offered to give us 20 minutes of her presentation time. A kind offer and unique possibility for us to still get a chance to introduce the Community to everyone!

Presenting to 250 people without preparation – what an experience!

The clock was ticking and we were frantic: within half an hour, we put together some slides about the Community – in three languages. And then it was our turn: without practicing once, we talked about development and purpose of the Community, its advantages compared with Facebook and its awesome contents and users which we were able to attract within the first year. I presented in German and my colleague Claudia interpreted into Italian and French. Last but not least, everything went surprisingly well considering the short preparation time. We were extremely happy when we had mastered this special challenge of talking in front of 250 people without preparation. 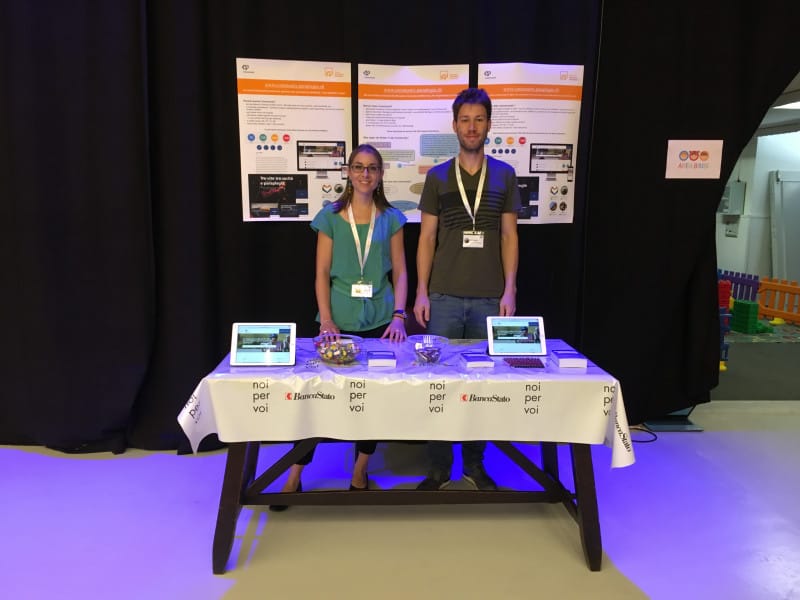 Claudia and Johannes at the Community stand

We got confirmation when some people did show up at our stand at the end of the day asking for more information about the Community. Awesome – and it definitely made up for our rough start! We are very happy to further develop the Community with many new partners. Finally the Zentralfest was nevertheless a great success for us.

A sincere THANK YOU to the numerous hard-working helpers of the wheelchair club InSuperAbili and their President, Walter Lisetto, for the outstanding organization! We are also looking forward to be part of the next Zentralfest in Nottwil in 2020.