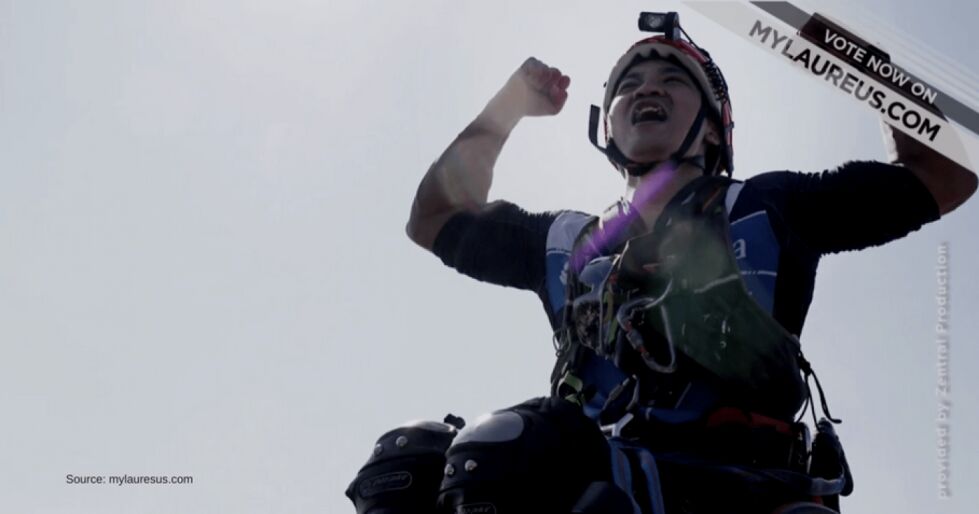 Disability is NOT a limit – cast your vote by January 2nd!

In October we introduced you the story of Chi Wai Lai, an athlete from Hong Kong who conquered the physical limitations as a paraplegic climbing up the Lion Rock (495 metres high) – one of the most remarkable mountains in Hong Kong.

Recently we have been told by user StellaChiu (thanks, StellaChiu!) that Lai’s Lion Rock story has been nominated alongside with five other incredible sport stories to compete for the Laureus Best Sporting Moment Award in December! It is one of the Laureus World Sports Awards – a ceremony held annually to honor individuals from the world of sports as well as sporting achievements throughout the year. The awards are often considered as the sporting equivalent of the Oscars.

Vote Lai for the “Best Sporting Moment of the Year”! (Photo source: mylaureus.com)

December’s contenders of the Best Sporting Moment Award include the renowned tennis players Roger Federer and Rafael Nadal. I admire both of them but I’ve still casted my vote for Lai simply because his story carries a stronger message: “You dare to dream and dare to try – do not let your body limitation discourage you from doing what you love to do.”

The Laureus Best Sporting Moment Award is the only category which can be voted by the public. Only the monthly winner from August to December will have the chance to compete against each other in another global public vote for the Best Sporting Moment of the Year title. Now support Lai, cast your vote and help share the message to the world that “nothing can stop you if you set your mind to it” – not even a disability!

Voting website: https://mylaureus.com/. The voting ends on 2 January 2018 at 13.00 GMT. Even if you are not interested to vote, watch the six short videos – they’re real emotional!

Last but not least, I wish you all a very happy festive season with your families and friends. Merry Christmas and a good start into the new year!