63 years old (!) was Heinz Frei when he won his 35th medal at international title fights at the Paralympics in Tokyo. In the meantime, he has retired from top-class sport and is getting used to his new life in early retirement.

In your biography it says that you had thought about resigning multiple times but then you always kept going. Can another relapse be ruled out?

Heinz Frei: Yes, this was definitely the end of my competitive sports career. With increasing age, one has to be careful to not become the laughingstock… To prepare for Tokyo, I have trained more than ever before and was rewarded unexpectedly with a silver medal. This was a very moving moment and the right one to complete this chapter.

There was a lot of hype around your last performance on the world stage. Was this a surprise?

Above all that I received mail from people that I don’t or hardly know. On the other hand, I feel honored by so much recognition and attention. It’s no secret that disabled athletes are not spoiled in this respect. I have received numerous invitations and have happily accepted them. In Oberbipp (Canton of Berne) where I grew up and am living now, I have been honored with the “Heinz-Frei-Plaza”.

Sport has been the common theme throughout your life.

Obviously, it’s in my genes. Already as a little boy I was constantly moving, it always had to be fast. As a teenager, I practiced several types of sport: athletics, gymnastics, basketball and cross-country skiing. Whether I would have made it to the very top as a pedestrian in any discipline? No idea. This had never been my intention anyway. But the severe consequences of the accident at the age of only 20 scared the hell out of me. No more sports – unthinkable!

How did starting new in a wheelchair go?

I was lucky in that I did not have to be retrained. The company in which I had completed my surveyor apprenticeship was willing to keep me on. This made me feel secure and kept me motivated. Soon after rehab, I became a member of the Kriens Wheelchair Club, exercised regularly and started competing. A key moment was when I was watching a marathon in Montreal on TV in 1981 and was surprised to see also wheelchair users participating. I swore to myself this is where I wanted to go as well. In 1987 I won there. This way and in otherwise sport became increasingly important. 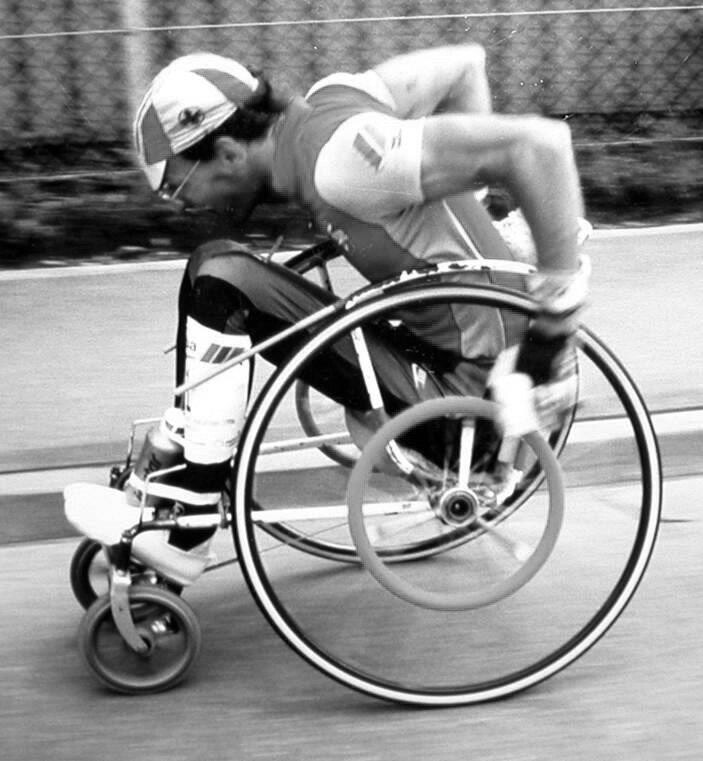 Relic from prehistoric times: This is what race wheelchairs looked like in the 80s. (Source for all images in this article: Swiss Paralympic / private archive Heinz Frei)

Faster than the runners: Fastest time at the Zurich Marathon 1984. 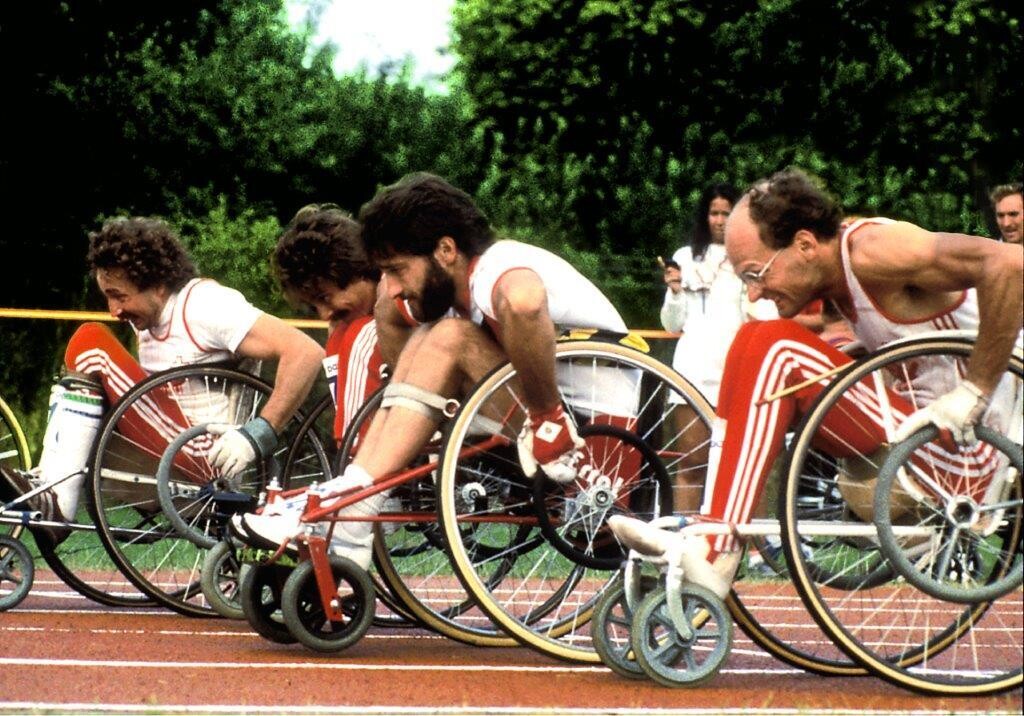 Heinz Frei at his first Paralympics 1984 in Stoke Mandeville (who recognizes the racer on the very left?). 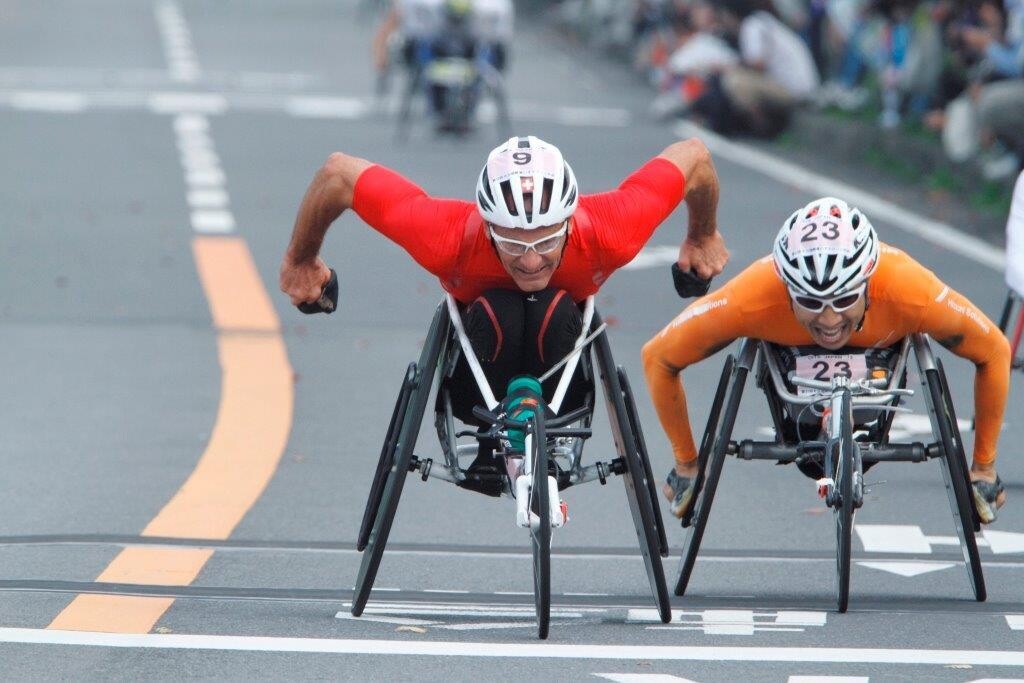 Setting the standard: In Oita (Japan) Heinz Frei set a marathon world record in 1999 and then became honorary citizen of the same name prefecture. Only in 2021 a new world record was established – at the same place by Marcel Hug. 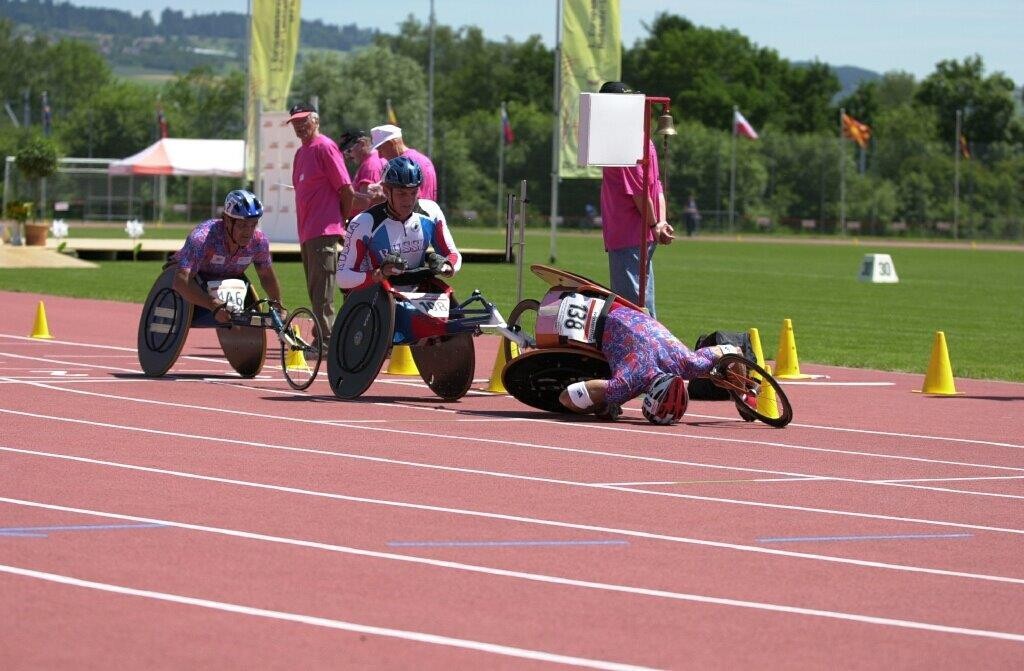 Shocking moment on the track: Heinz Frei falling headfirst due to material fracture at the European Championship 2000 in Nottwil.

In your biography you also talk very openly about your personal life.

That’s a part of me. Because personal experiences outside of sport – positive and negative ones – also impacted me and some of them helped me find my way. Furthermore, many people probably don’t know the limitations and problems a spinal cord injury entail. In my case sport, work and family were never completely separate areas of my life. I was working 50%. In order to not neglect daily tasks in the household, especially with two kids, being well organized, planning and discipline were necessary. By being compassionate and respecting each other, however, things went mostly smoothly. Those were my best years. I was a happy semi-professional, had a few sponsors, won prize money and awards. All this dispelled also the last doubts that focusing fully on the job would have been the better choice.

At age 40 plus, I was thinking about my future. Coincidentally, Swiss Paraplegic Association (SPV) was then looking for someone to help promote young wheelchair athletes. I was contacted and finally accepted the job. It was pleasure and satisfaction at the same time to motivate young people in wheelchair for sport, to experience their progress and to guide some of them on their journey to becoming top-class athletes. I myself felt also encouraged by the environment and conditions in Nottwil; among other things to start a second career in handcycle.

Is sport also kind of a drug?

The simplified and short answer is yes. Only that physical activity for people in wheelchair actually is a must. The main emphasis is placed on preventing complications and staying healthy. Of course, being successful feels good, also mentally. However, striving for performance per se is not important but the effect of sport on reintegration is. And material incentives come last. Even a winner of numerous Paralympics is by far not set up for life at the end of his career.

One of many moments of glory: Two gold medals in hand bike at the 2008 Paralympics in Beijing.

How does “early retirement” feel?

Very good. No signs of blues. Especially since I did not stop from one day to the next and I was never completely isolated from the other world. I exercise whenever I feel like it and I enjoy being able to take decisions more freely and spontaneously in daily life. I spend more time with my family which now also includes a granddaughter, I do the house husband every now and then, I like tinkering and making things. Furthermore, I still look after a few mandates.

Where else are you involved?

I am Ambassador of Swiss Paraplegic Foundation (SPS). In this role, one of my tasks is to guide visitors through the Nottwil campus or give talks. I am also President of the Benefactors’ Association of SPS as well as the Board of Directors of Orthotec AG which is working on some very interesting, innovative projects. Ultimately, I pass on my experience and knowledge to young athletes or sports associations. There will be hardly any time for getting bored in the short run. 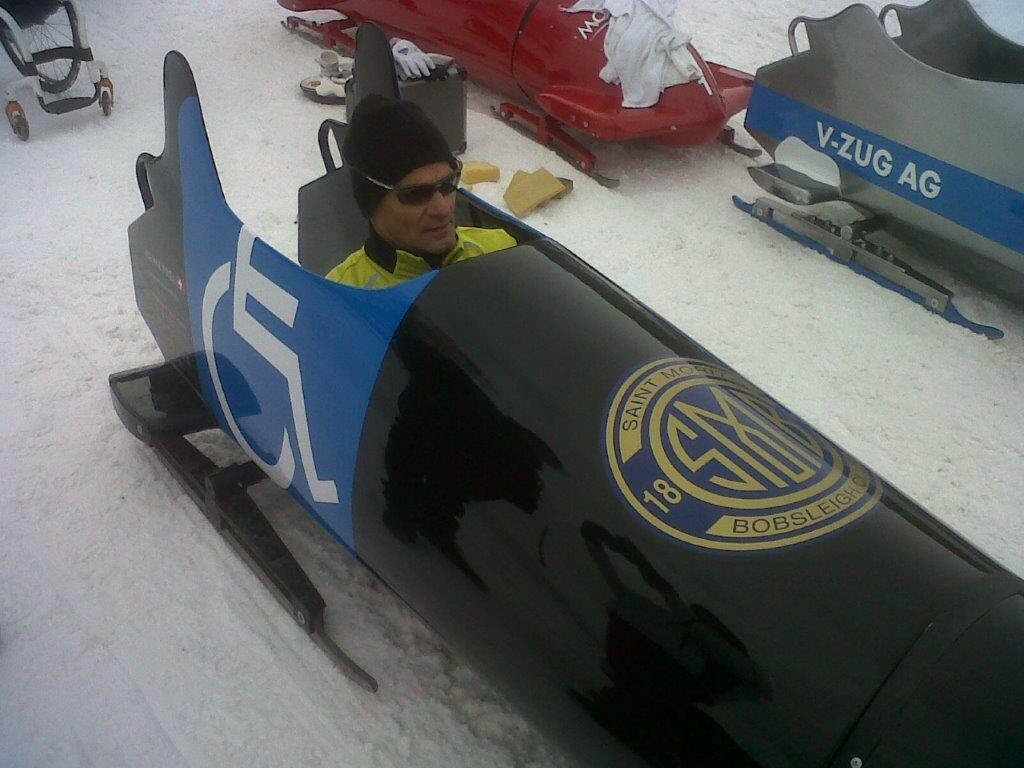 Thrill and prove of courage: At the start to steering the monobob in St. Moritz. 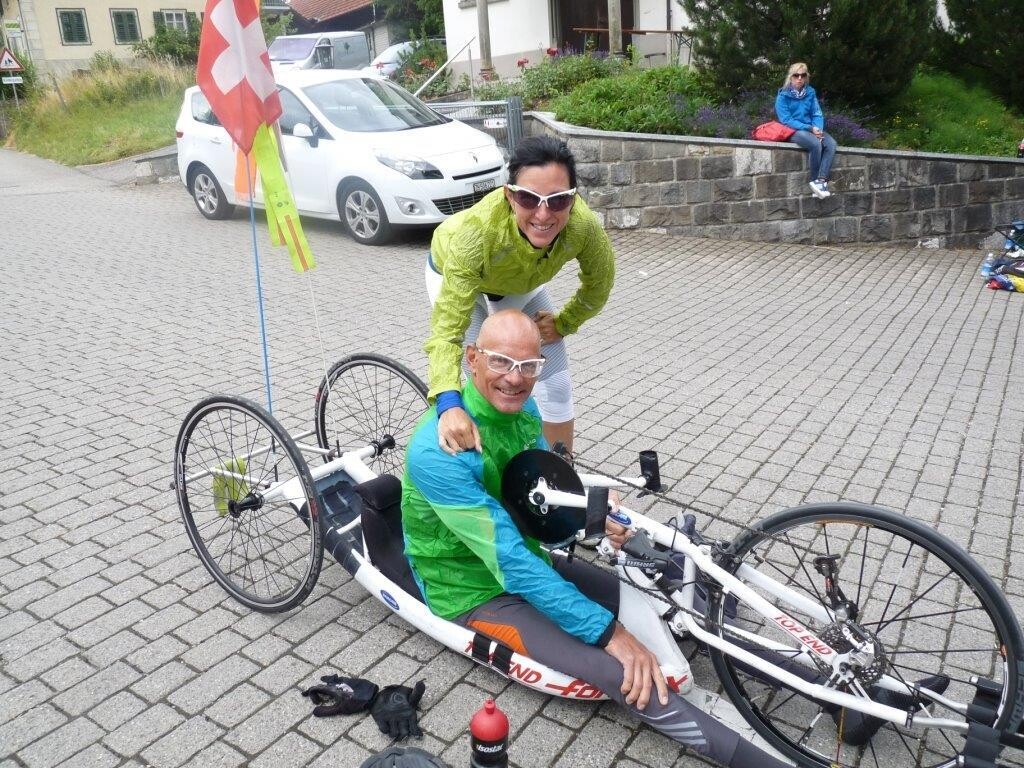 Movement as elixir of life: Heinz Frei and his wife Rita travel a lot.

How about getting into politics like other former top-athletes?

I used to get contacted from time to time from parties, for example to run for the Canton Council of Solothurn. However, holding a public office would have been too challenging timewise. Now it’s too late. However, I have always been very interested in politics.

What are the deficits there with respect to the matters of people with disabilities?

There are some inequalities in insurance coverage for people with birth defects versus people who are disable due to injury or disease. There is also a backlog with respect to traffic infrastructure and means of transportation. It would also be desirable if “our” athletes were considered equal to athletes without disabilities when it comes to prize money. This could be realized relatively fast. Other projects that may involve longer procedures require more patience.

I don’t have a bucket list that shows what I may have missed or is still outstanding. Due to sport I have seen a lot of the world, have had many extraordinary and unforgettable experiences and met many interesting people. Flying to the beaches of the Maldives tomorrow? Rather unlikely. My wife and I don’t suffer from wanderlust. Also, we prefer active holidays, where there is lots to discover and the necessary infrastructure available for wheelchair users.

Reading recommendation (in German only):