Zeljko Raduljevic, who has been paralyzed since his COVID-19 disease, shares his rehab experiences at SPC Nottwil during the pandemic

In the first part of the blog series, speech therapist Sarah Stierli at Swiss Paraplegic Center (SPC) in Nottwil, shared her impressive experiences in the intensive care unit during the COVID pandemic.

In the second part, SPC patient Zeljko Raduljevic shares his experiences. Since he became severely ill from COVID-19, he has been paralyzed from his neck down.

Raduljevic is in rehab since February 2021. He openly shares how he experienced this period, how he deals with the situation – and he talks about a “small miracle”.

The strictly isolated part of SPC, the COVID-intensive care unit (ICU), is where patients with communicable diseases were treated. Insights into this unit were given in the first part of the blog series. 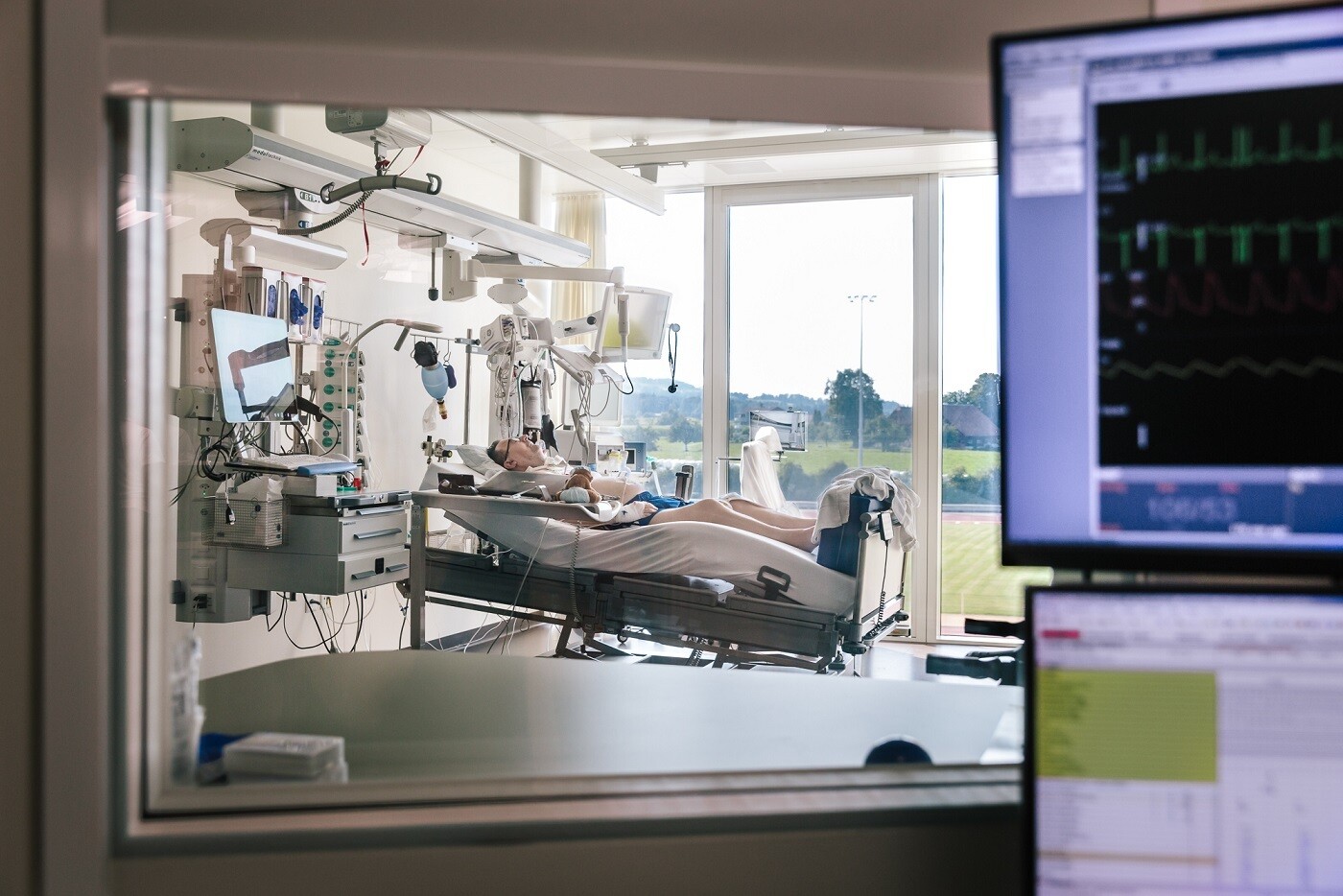 The patients in the COVID-ICU felt very isolated.

Additionally, many patients were admitted who had been severely ill from COVID-19 for some time – the so-called post COVID patients. Speech therapist Sarah Stierli explains: “While these patients were no longer contagious, they still had to be treated in the ICU and some of them are still in rehab at SPC. Some of them have recovered well and have been occupationally reintegrated. Others still rely heavily on care support also after nine months of rehabilitation – independent of their age.”

“Although they are no longer contagious, they still have a long way to go.”

One of these patients is Zeljko Raduljevic. Since February 2021, the 39-year-old has been in rehab at SPC in Nottwil. Since his severe course of COVID-19, he has been paralyzed from the neck down; this is called tetraparesis. As this article (in German) explains, this is a phenomenon that occurs only in very rare cases in connection with COVID-19.

Since the respiratory muscles were no longer working, Zeljko received a tracheostomy tube. For over 6 months, he was on a ventilator.

He takes the time to explain what happened for this blog. 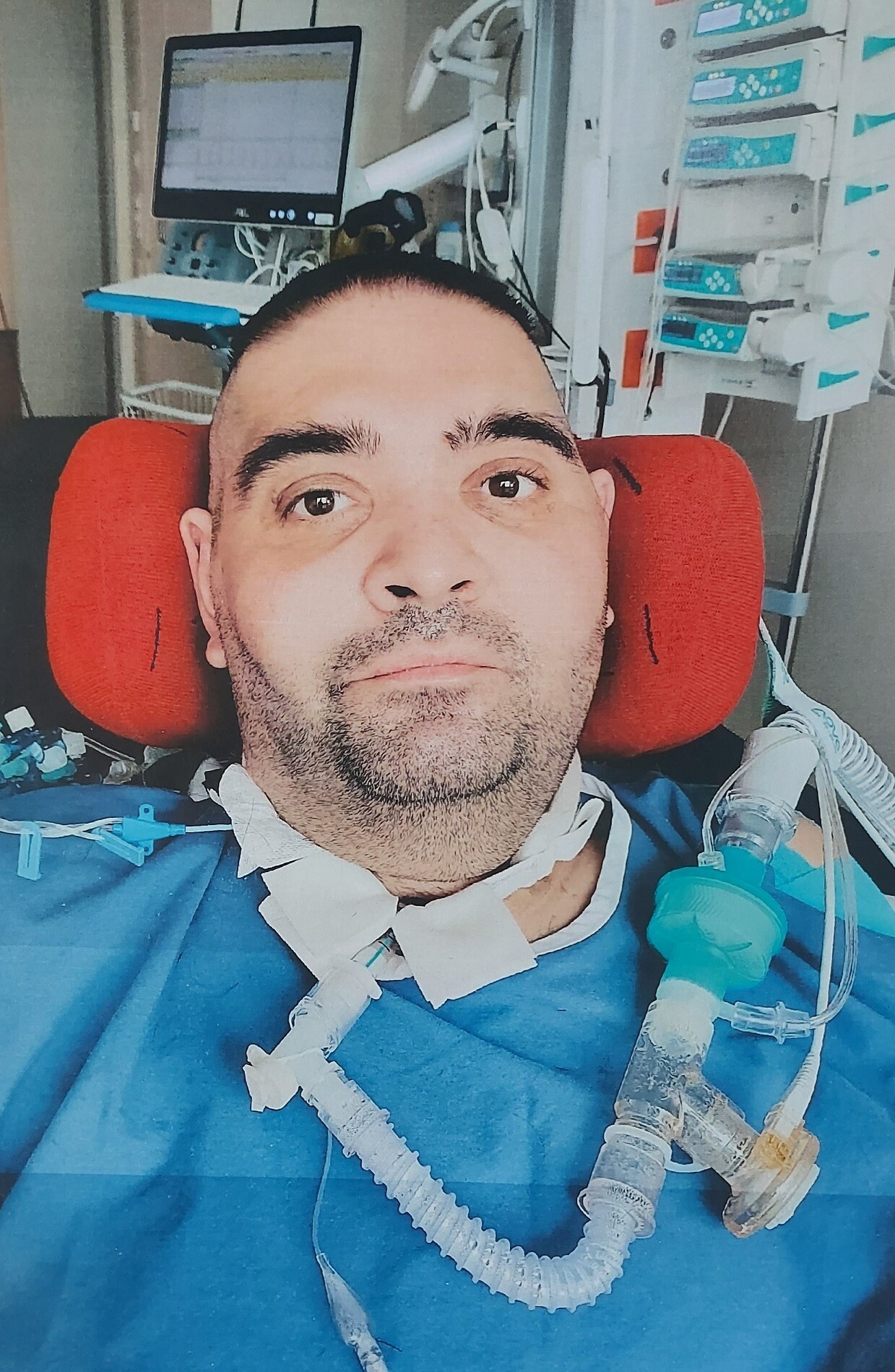 Zeljko Raduljevic was on a ventilator for over six months.

“There was one thing after the other. Corona was the trigger of all this calamity.”

In December 2020, Zeljko tested positive for SARS-CoV-2 – the “Corona virus”. One week later, he was taken to an acute care hospital in the Canton of Zurich with high fever. He was in coma for six weeks.

When he woke up, he was able to breathe by himself at first. “However”, he explains, “one day, while doing my sitting exercises, breathing suddenly became difficult. There was one thing after the other. Corona was the trigger of all this calamity.”

Although he was no longer contagious, Zeljko continued to be isolated in the ICU because his entire immune system had become very weak. “If someone came to see me, they had to wear sterile clothing and also a cap over their hair”, remembers Zeljko.

Back then he was not able to speak despite the ventilator. He therefore was hardly able to draw attention to himself, he says. Therefore, and due to being isolated, he sometimes had to wait for long periods of time.

Due to his paralysis, he was transferred from the ICU to SPC after a few months. He remembers well being taken there. “I sometimes had to wait for a few seconds until I was able to breathe again. But I calmed myself down to be able to bare the respiratory distress”, he explains. 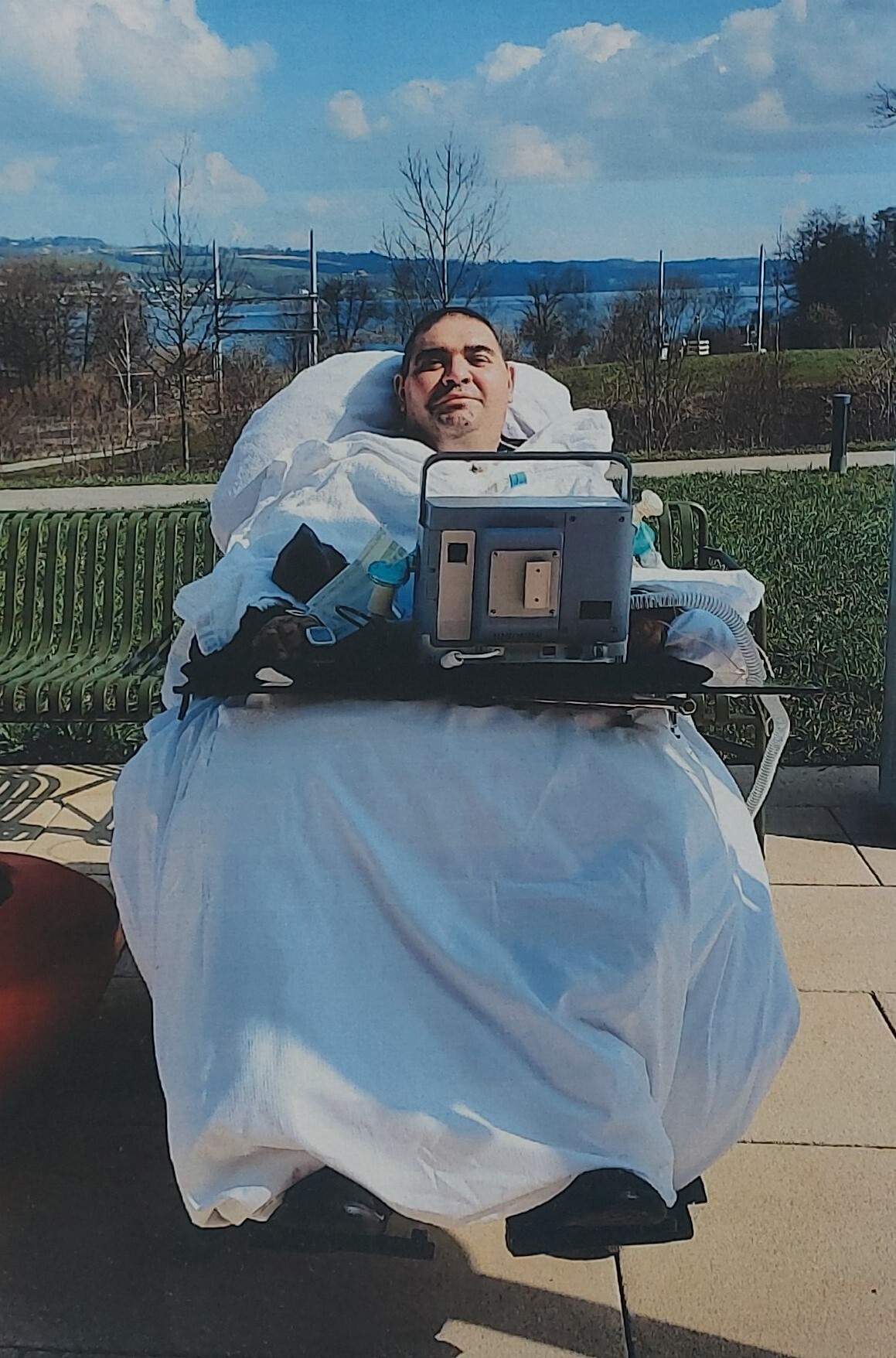 Zeljko with ventilator on the deck of SPC, Nottwil.

“I knew exactly that I simply had to go through this if I wanted to make progress.”

His complete dependency was hard to bear for Zeljko, also at SPC as he explains. “I remember how concerned I was before each mobilisation. This was due to the many tubes that I had inside of me. Every day, I had occupational therapy, speech therapy and physiotherapy. For eating lunch, I had to sit in the chair. I also had to use the standing table every day. This was all very stressful and bothered me a lot. But I knew exactly that I simply had to go through this if I wanted to make progress.”

Also because of the many tubes Zeljko was concerned about each mobilisation.

“The most difficult part was that I could not move my legs but feel them very strongly. And if, after approximately 90 minutes, nobody moved my legs, it was very painful, everything became stiff. Therefore, I was so grateful when I was finally able to speak properly through a speaking valve after six weeks at SPC”, the trained singer explains. This allowed him to communicate with the nurses and to draw attention on himself more easily.

A small miracle and staying positive

After a short training period, he was able to wear the speaking valve all day long, although he would still be dependent on the ventilator for many weeks. Only since mid-July he can breathe freely without distress and without ventilator. He is enormously grateful for that. He only needs the tracheostomy tube as interim support until he feels entirely comfortable without ventilator for longer periods of time. “My body has found a different way to control the diaphragm. That’s a small miracle!”, he explains in the interview.

His biggest and most important progress, however, was being able to move his head completely. “In the ICU he was only able to move his head slightly. That is why they put the call button next to his temple. But whenever I had slid down only slightly in my bed, I was no longer able to reach it and therefore couldn’t buzz anyone. Now I can move my neck normally. I can also lift my shoulders very well and move my legs slightly. They are, however, not concrete movements yet.”

“I don’t see SPC as an institution but my current life.”

Zeljko will probably be in Nottwil until the end of November. He was informed by the doctors that he will not be able to walk again. A solution for continuing therapeutical care is currently being looked for.

Every day he has intensive therapy. For example, he is training the hand movement which he will need to perform to control an electrical wheelchair with an exoskeleton. 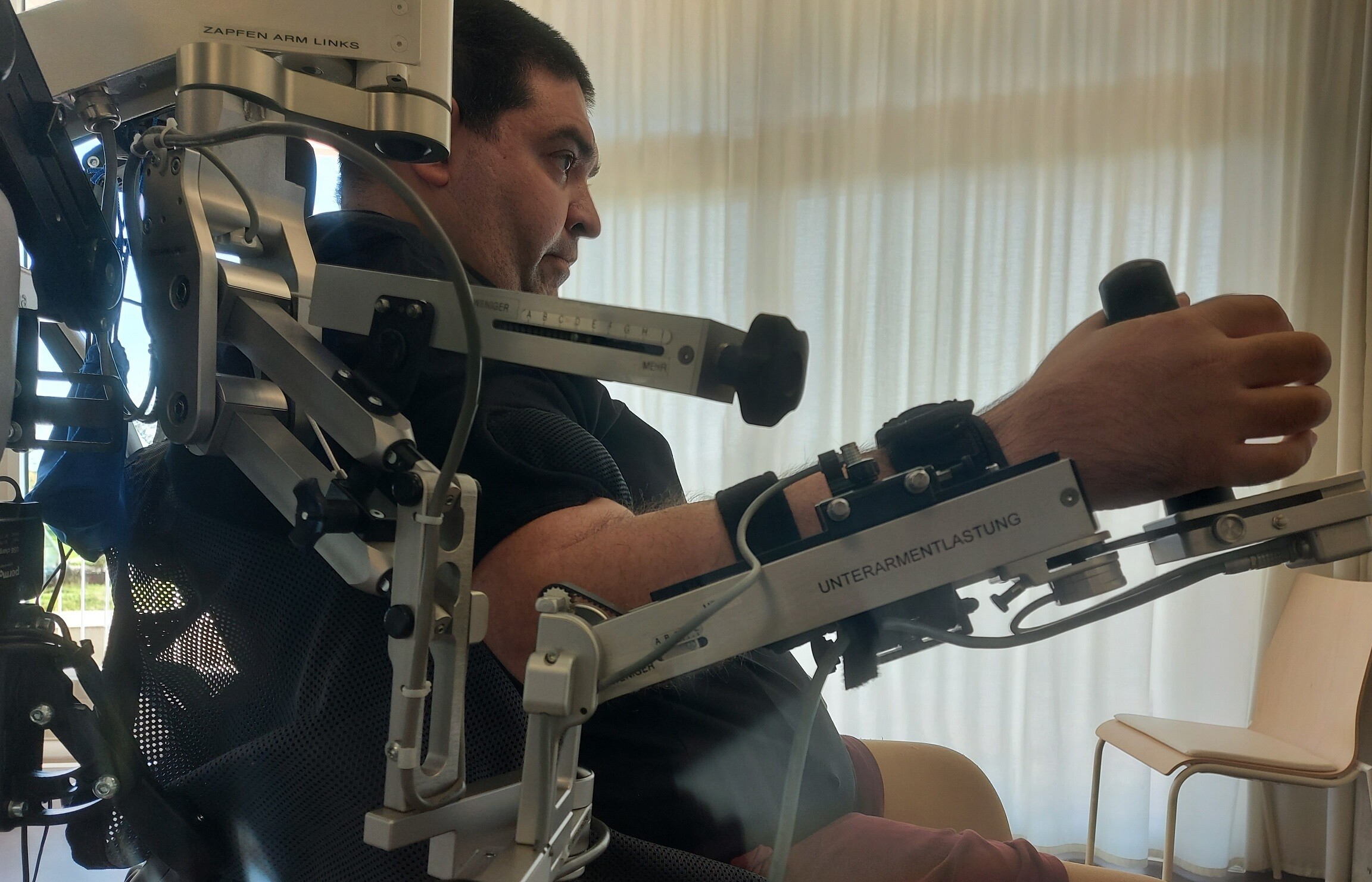 He doesn’t really mind that the entire rehab takes much longer than he anticipated, so Zeljko. He tries to live in the present and doesn’t allow any negative thoughts. He prefers to be easy going, open minded and to play a friendly trick on staff every once in a while. After all, he has been living with these people for quasi six months now.

“I don’t see SPC as an institution but as my current life”, he adds. This idea makes him feel stronger.

When Zeljko is asked at the end of the interview what else he would like to say, his answer is: “I am doing very well here and I feel good”. He can hardly believe how fast time flies by. As long as it doesn’t stop, all is well. 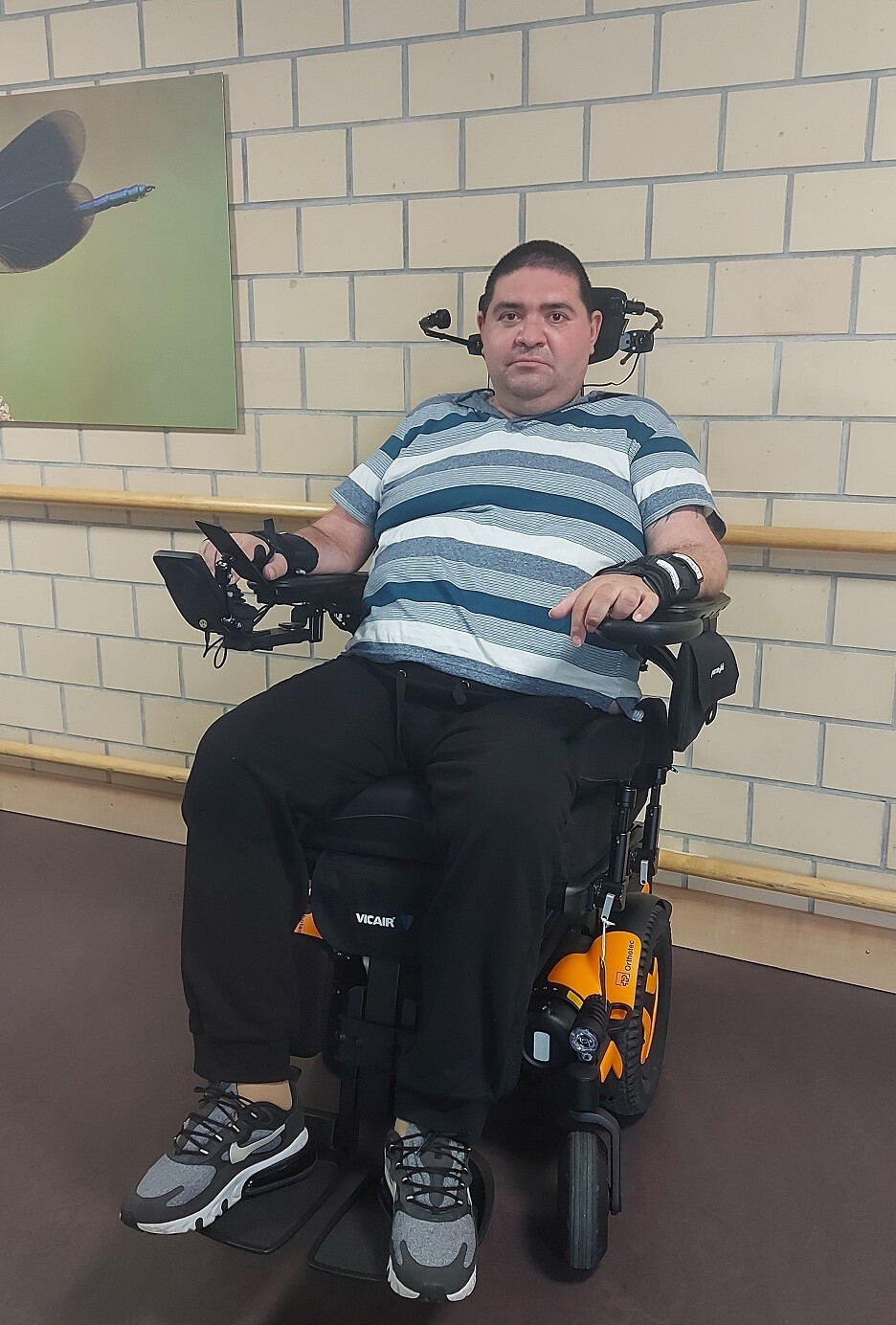 Zeljko in the hall of Swiss Paraplegic Center. In the meantime, he does not need the tracheostomy tube anymore and it has therefore been removed.

Since the interview, time has passed for Zeljko – maybe faster than assumed. After a few days only, the tracheostomy tube could be removed. The tracheostomy is now closed. Only a small scar on his throat reminds of his complete dependency on the ventilator. With this step, Zeljko has reached another milestone on his rehab path.

We wish him many more successes on this path – and who knows, maybe a small miracle will still happen.

Update: A few weeks after this post, “20 Minuten” published a video about Zeljko Raduljevic. Unfortunately, some comments to it are inappropriate.