“It matters that you don’t just give up”

Stephen Hawking would have turned 80 in January. Despite ALS the physician proved himself capable of extraordinary achievements.

He did his nickname justice. He was called “Einstein” by his classmates and the young Stephen William Hawking was at least as curious as the old master. His sharp mind made him explore the question of the origin of space already as a child. “I have always wanted to explore the depth of the universe”, is what he will tell years later.

His path from a sharp-minded boy with mediocre grades to a worldwide recognized physician was, however, arduous and everything else than obvious. Because the brilliant mind lived in a sick body.

At age 21, studying Chemistry and Mathematics, the young Brit was diagnosed with ALS, Amyotrophic lateral sclerosis, an incurable nervous disease that was already at an advanced stage. The physicians told him he would have 24 months to live.

When he passed the zero line and nothing happened, Stephen Hawking began to take each day as a gift. 1962 he graduated with a bachelor’s degree in Oxford, switched to the University of Cambridge, where he began his PhD in astronomy (science of the stars) and cosmology (development of the universe). 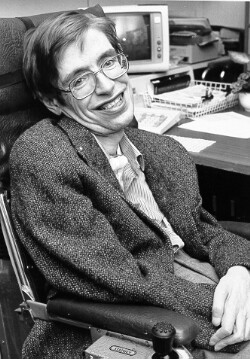 Already at a young age, here in 1974, Stephen Hawking was using a wheelchair.

His willpower was stronger than the disease

The certainty that any day could be his last kept Stephen Hawking going and gave him an incredible creative power. Spared from physical deterioration was his brain and it seemed to want to compensate what the increasingly immobile body was no longer able to do. He found strength and inspiration in Wagner’s music – and in his love for his girlfriend Jane Wilde. The two got married and swore to each other to fight the disease together. 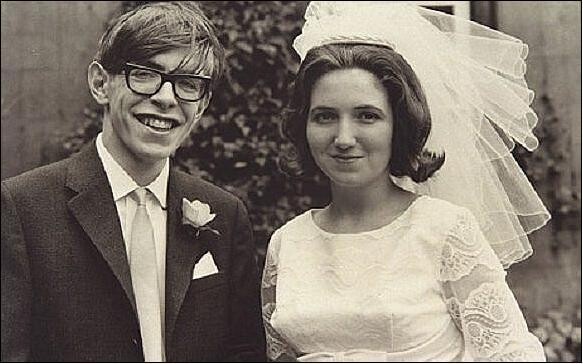 Stephen Hawking and his wife Jane Wilde at their wedding in 1966.

They had three children together: Robert (1967), Lucy (1970) and Timothy (1979). The two older ones are currently still active in the management of the Stephen Hawking Foundation which promotes research in the areas cosmology, astrophysics and fundamental particle physics in schools but also universities.

“I never imagined that we would be able to have three beautiful and accomplished children, and they are the best achievements in my life, if you can call children, achievements...”

Stephen Hawking in his speech for the National Health Service, 2017

He explained science understandable for everyone

With support from his family, PhD students and colleagues, the scientist was taken up completely in his academic daily life. For over twenty years, he worked as Lucasian Professor of Mathematics at the University of Cambridge and founded the Centre for Theoretical Cosmology.

His whole life, the physician dealt with the big questions about black holes and the origin of the universe. Among his literary work are award-winning academic works as well as generally intelligible books. “It is important that scientists explain their work”, he once said. His most famous essay most likely is “A Brief History of Time”, which was translated in over 40 languages and sold over 20 million copies.

Numerous medals, awards and honors accompanied his professional career. The Queen herself honored him with Commander of the British Empire in 1982 and in 2009 the back-then US President Barack Obama awarded him the Presidential Medal of Freedom. He was only refused the Nobel Prize because it requires experimental proof. Hawking’s research, however, was based on mathematics, theories and the power of his thoughts.

Hawking is welcomed by US President Barack Obama at the White House in 2009 and is awarded the Presidential Medal of Freedom.

Communicating was always a challenge

While attending a congress near Geneva in 1985, Hawking contracted pneumonia. To save his life, the doctors performed a tracheotomy. From then on, he was no longer able to speak. During the first months, he communicated through lifting his eyebrow and later he used a computer with a voice synthesizer – first through a button and hand and later through an infrared sensor in his eyeglasses.

Also his personal life changed. In 1990 the scientist left his wife Jane and moved together with his nurse Elain Mason who he married after his divorce in 1995. For eleven years, they mastered life together and they traveled a lot for his talks and research work. In 2006 also this relationship fell apart. 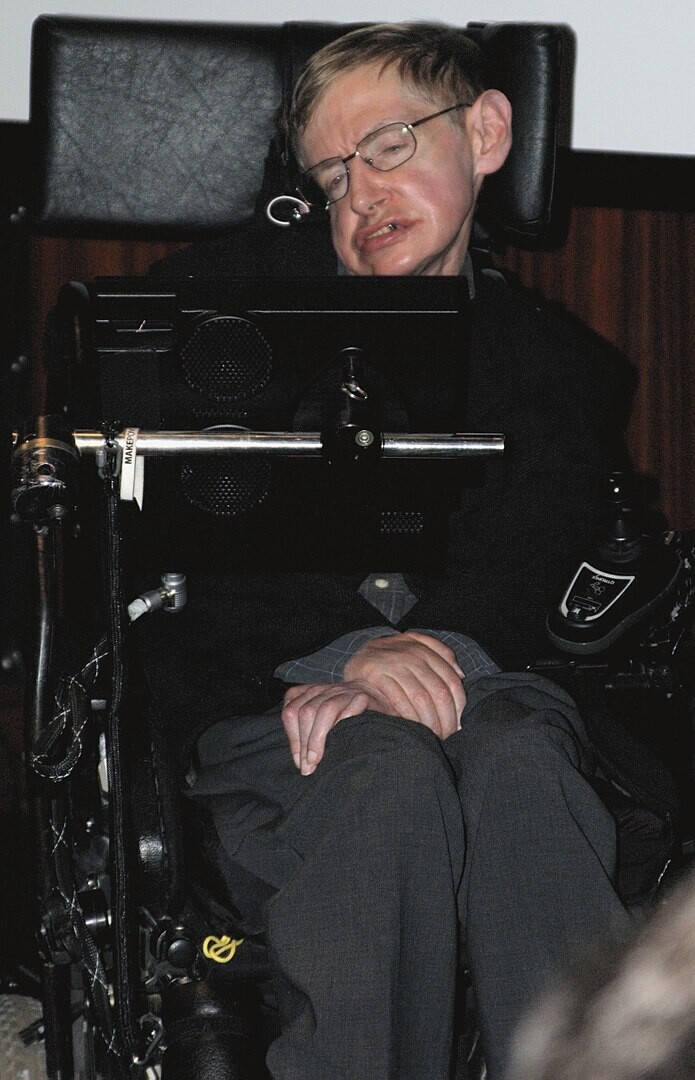 Stephen Hawking during a conference in May 2006 in Paris.

“Remember to look up at the stars and not down at your feet. Try to make sense of what you see and wonder about what makes the universe exist. Be curious. And however difficult life may seem, there is always something you can do and succeed at. It matters that you don’t just give up. As long as there is life, there is hope.”

Weightless escape from the wheelchair

Stephen Hawking was convinced that our Earth was too fragile – and that mankind only survives if it populates a new planet. It was his biggest wish to fly to outer space himself. This he did not achieve. In 2007, however, he undertook a weightlessness flight in a Boeing 727, experienced 8 parabolas and thus freed himself from the fetters of his wheelchair for a moment. The impish smile on his face during these moments seems to have let him forget all barriers. 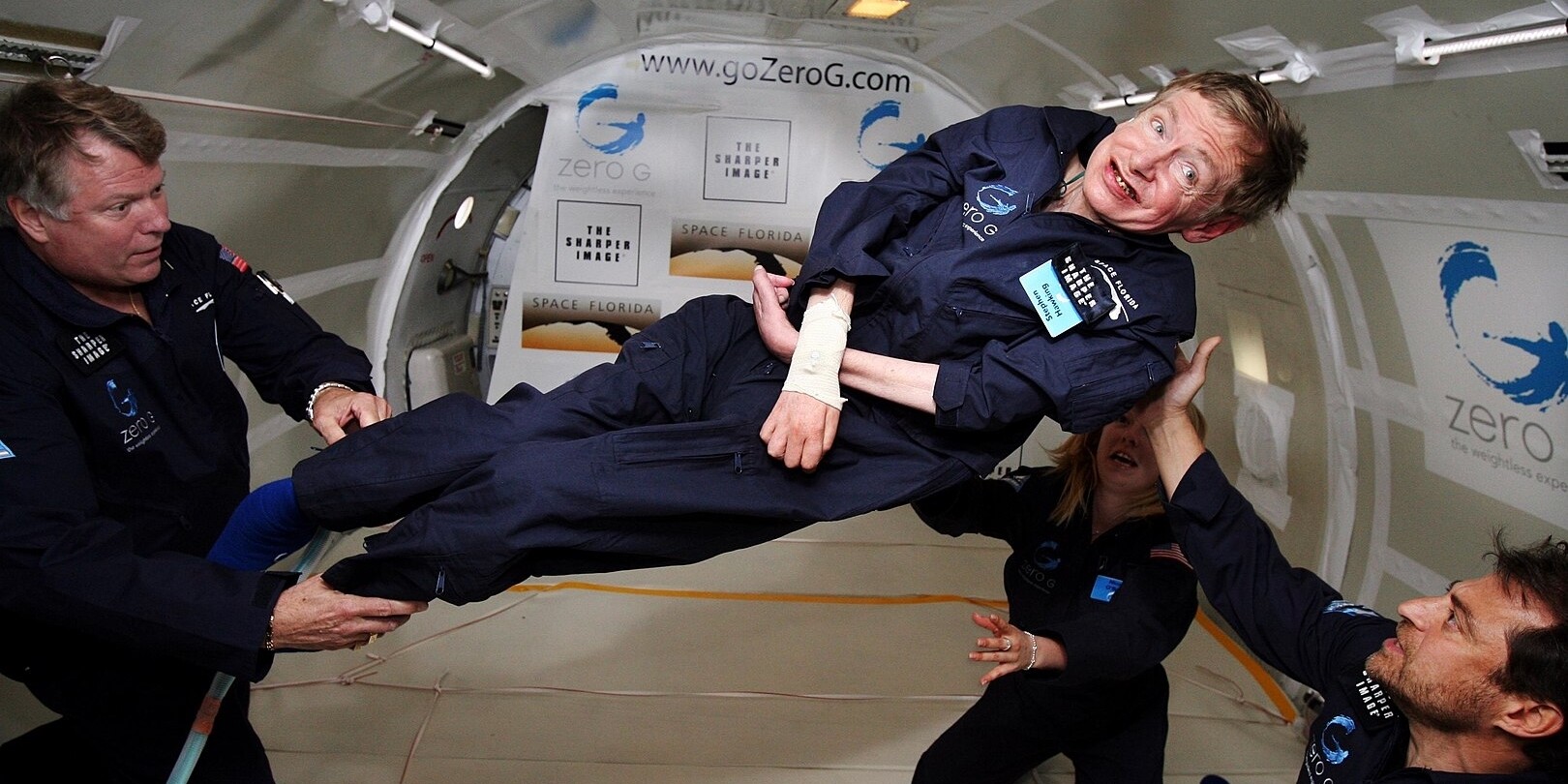 The doctors gave him 24 months to live. That was when he was 21 years old. Stephen Hawking finally passed away on March 14, 2018 at home in his house in Cambridge at just over 76 years. His ashes are at Westminster Abbey in London between the resting places of Sir Isaac Newton and Charles Darwin.

A personal tribute was created by composer Vangelis with a musical piece with the voice of Stephen Hawking, which was transmitted to outer space on the day of his funeral by the European Space Agency ESA. According to his daughter Lucy, it is a message of peace and hope.

Stephen Hawking dreamed of flying to outer space himself one day. What is your biggest wish?