Work and suffering of Frida Kahlo

Her look is always serious. And her face catches attention immediately. The bushy eyebrows almost touch above the root of her nose and there is also her characteristic lady’s mustache.

Throughout her whole short life, Frida Kahlo painted 143 pictures in total – 55 of which are self-portraits and tell about the pain, mental and physical, which is part of her entire life. Her characteristic facial features, the brows and the mustache, are exaggerated in her paintings.

The artist celebrated some smaller successes throughout her lifetime. However, broad acknowledgement of her work developed only long after her death. Today the paintings form part of the national “cultural heritage” of Mexico – at the behest of the government. This means that no piece of her work located inside the country must change ownership without informing the national cultural authority. Also abroad Frida Kahlo is becoming more and more popular. Thus her painting “Diego and I” was sold for an incredible 33 million Francs at an auction at Sotheby’s last November. 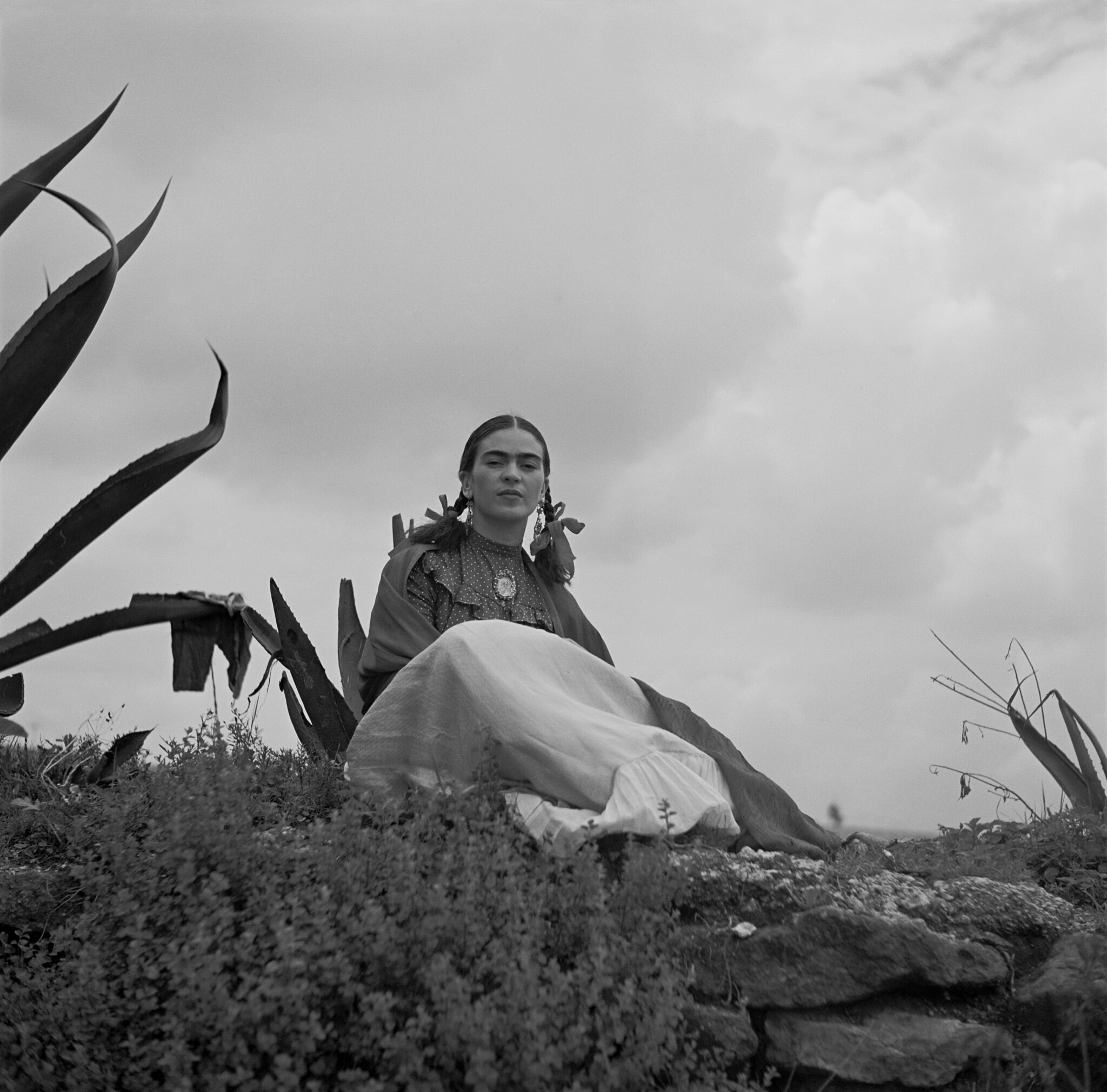 Who was this woman who was among the most important artists of Latin America? Why did she spend a major part of her life in a corset, paint in bed, consume drugs? Her life story is fascinating and scary at the same time. It gives a good impression how strong and vulnerable Frida Kahlo was at the same time.

The daughter of a Mexican and a German photographer is born on July 6, 1907 in Coyoacán, a southern borough of Mexico City. Magdalena Carmen Frieda, which is her given name, grows up there with three sisters and two half-sisters. Her mother Matilde is illiterate and primarily takes care of the household; from her the girls learn traditional stitching and sewing. Father Carl Wilhelm spends only little time with his daughters; however, he chooses Magdalena Carmen Frieda as his favorite, takes her out into nature and teaches her how to observe and pay attention to details of things.

The family lives in Casa Azul, the Blue House, which today hosts the Kahlo-Museum. 1910 marks the beginning of the Mexican Revolution. There is upheaval in the country and the people revolts against the long-term president and dictator. Frida Kahlo later decides to change her year of birth from 1907 to 1910 so that her own life would start at the same time as the new Mexico. She also takes out the “e” from her third given name and calls herself simply “Frida” from now on.

Photograph of the four sisters Cristina, Matilde, Adriana and Frida (from left) taken by their father in 1916. (Source: Guillermo Kahlo, Wikimedia Commons)

At the age of six, Frida becomes seriously sick. The doctors assume poliomyelitis – only in the 1930s experts diagnose a congenital malformation of the spine. The girl spends months in bed, recovery progresses only slowly. Consequently the right leg remains thinner and shorter. Frida is nevertheless athletic and loves swimming and cycling.

The day that changed everything

To prepare for her desired studies of medicine, Frida Kahlo attends the “Escuela Nacional Preparatoria” in Mexico City starting in 1922. She is among the first and few girls who are admitted at all. Then the accident happens that would shape the rest of her life: On September 25th, 1925, Frida is on a bus which collides with a tram. In doing so, a handrail pierces through the back and pelvis of the young woman. She suffers most serious orthopedic and gynecological injuries. 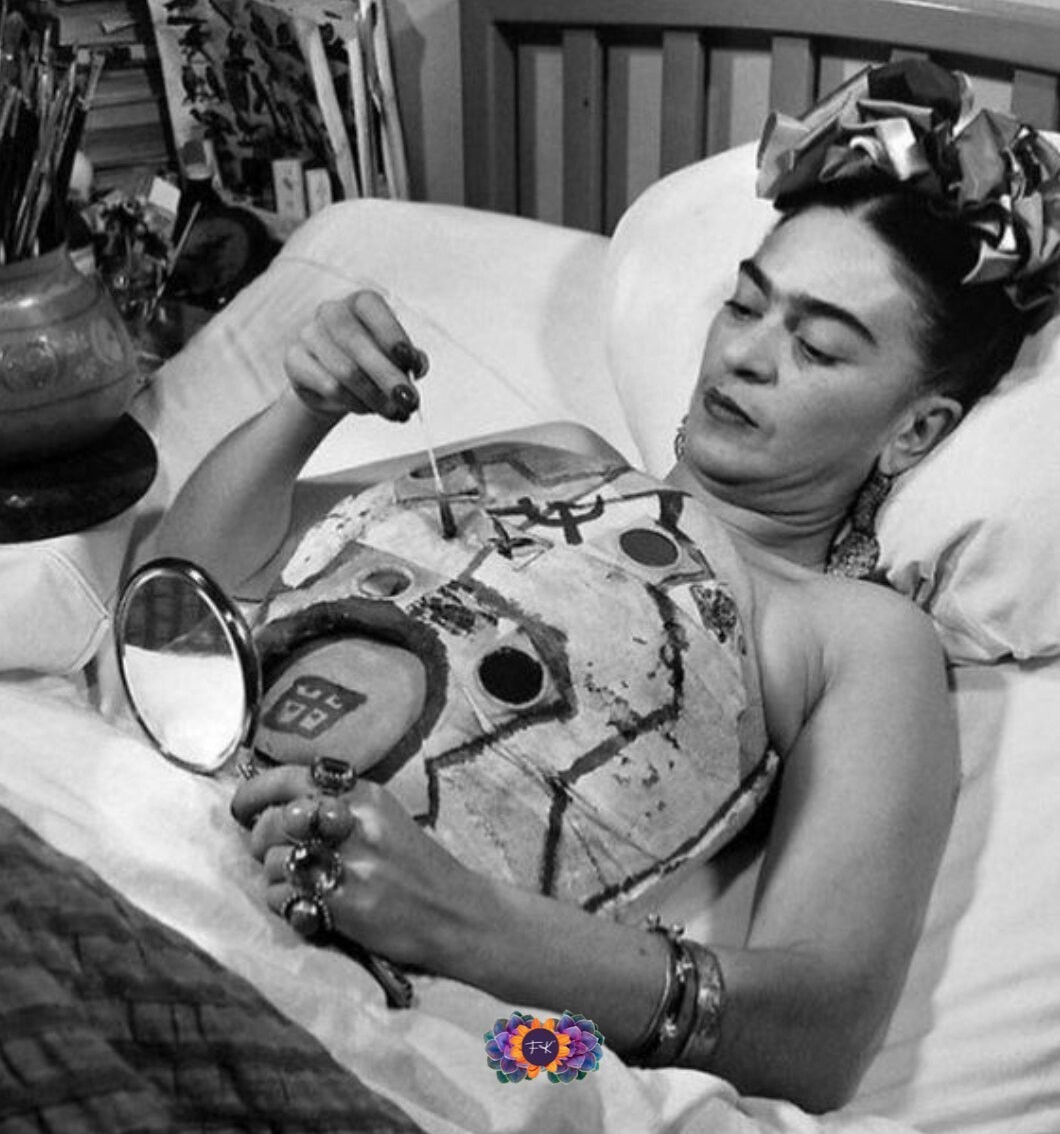 Lying in bed, Frida Kahlo paints her corset. At times she had to endure the constricting support. (Source: Facebook @fridakahlo)

What follows over time are over thirty surgeries, an odyssey through hospitals. For some time she had to wear a whole-body cast or a steel corset. During her long recovery time Frida begins to paint, above all self-portraits such as “Autorretrato” (1930) or “Very Angry” (1932) or “Self-Portrait in a Velvet Dress” (1926). Using drugs and alcohol she tries to make the pain more bearable. Friendships break up, new ones form – and in 1928, through a common friend, she meets the love of her life: the Mexican painter Diego Rivera.

Art connects the two but also their political views and passionate patriotism. Diego is famous for his large political revolutionary wall paintings and eternalizes Frida in portrait format in his work “Ballad of the Revolution” which he painted for the Ministry of Education in Mexico City back then.

The two are described as the elephant and the dove. He is strong-built and tall and she is petite and fragile. The two get married twice – in 1929 and in 1940 – with countless affairs on his and her side, with men and women, longer stays in the USA, jealousy and depression. At the end, however, their attraction to each other wins. 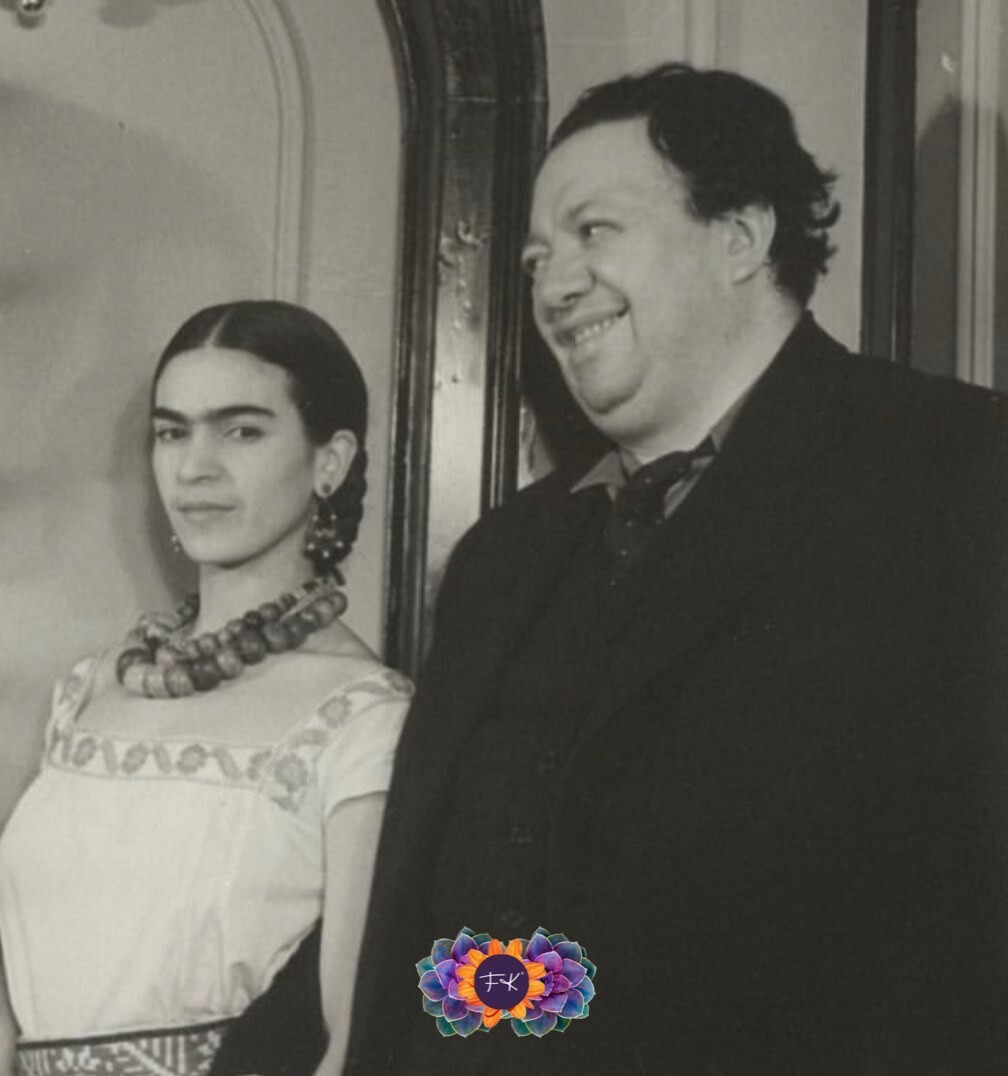 Diego Rivera is 20 years older than Frida Kahlo. Her mother describes the two as the “elephant and the dove”. (Source: Facebook @fridakahlo)

At the exhibition in hospital bed

Not only her relationship experiences ups and downs but also her health. Nevertheless Frida Kahlo manages to make a name for herself as artist. She creates work that shows her suffering, her maltreated body, her countless miscarriages, the never-ending pain. Among her most famous work are paintings such as “The Two Fridas” (1939), “The Broken Column” (1944) or “Henry Ford Hospital” (1932). Her first solo exhibition takes place at the Julien Levy Gallery in New York in 1938; one year later her works can be seen in Paris.

Together with Diego Rivera Frida moves into her parental home in Coyoacán, into the Blue House, and together they teach at the School of Arts “La Esmeralda” for ten years. In 1951 she is even awarded the National Award for Painting for her work “Moses” (1945) by the Ministry of Education.

However, all the successes cannot belie Frida’s health condition which is worsening. The hospital stays are becoming longer and longer, soon she has to wear the body cast constantly. One leg is amputated and the wheelchair becomes her constant companion. She paints only in a lying position and visits the opening of her first solo exhibition in Mexico in a hospital bed. 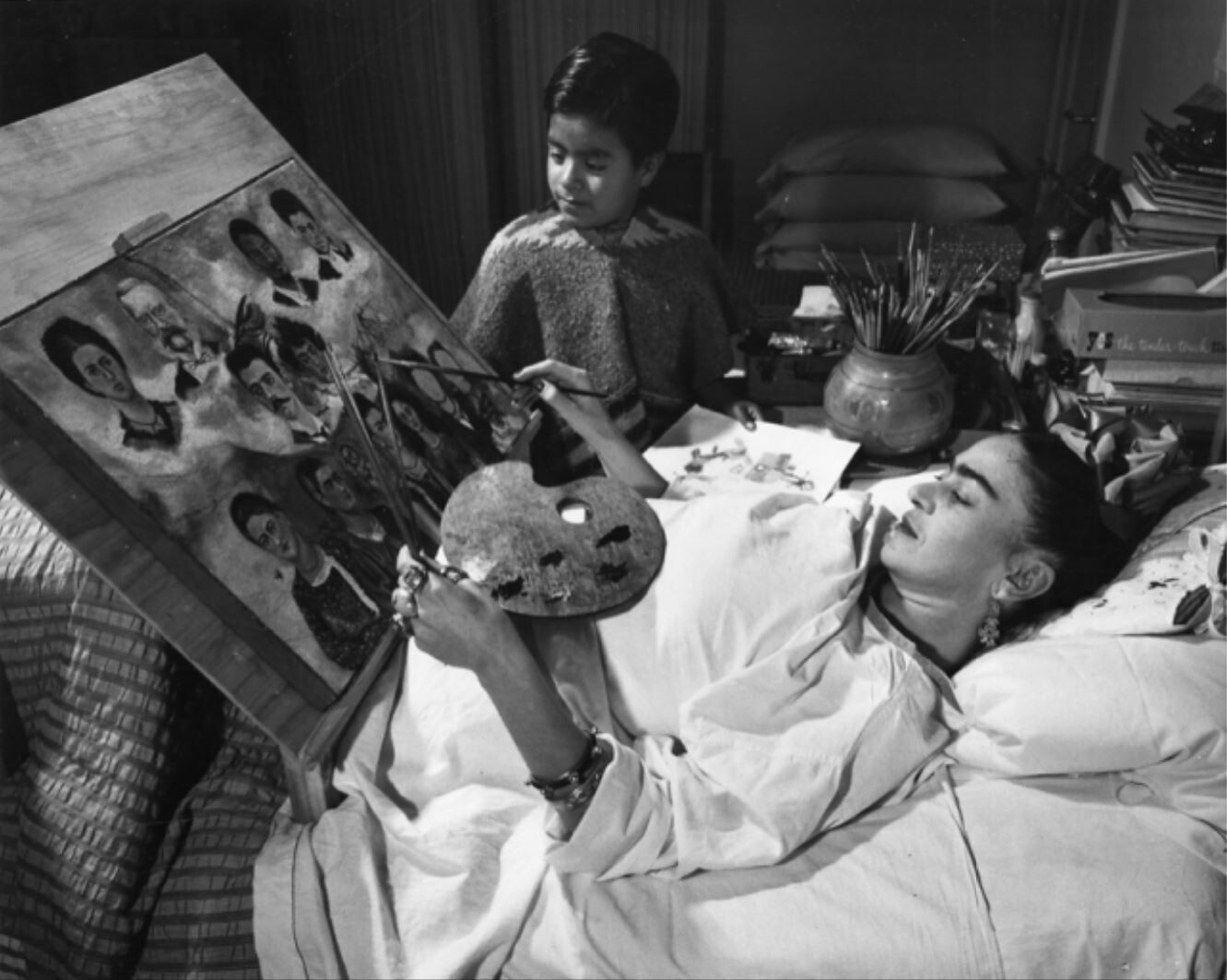 Lying in bed Frida Kahlo paints numerous pictures. Her creative power is – despite or exactly because of her pain – tremendous. (Source: https://blog.artsper.com)

Frida Kahlo passes away in the Blue House on July 13th,1954, only seven days after her 47th birthday. Officially the artist dies from pulmonary embolism. Her friends, however, do not eliminate the possibility of suicide through an overdose of sleeping pills and pain killers. Her husband Diego refuses further clarification and his wife’s body is cremated.

Her works are full of pain and suffering but also beauty and poetry. If you want to learn more about Frida Kahlo, her paintings and her life, check out the numerous impressions on Facebook and Instagram. Or, of course, also directly at the Blue House which lets the outstanding artist and her story live on. 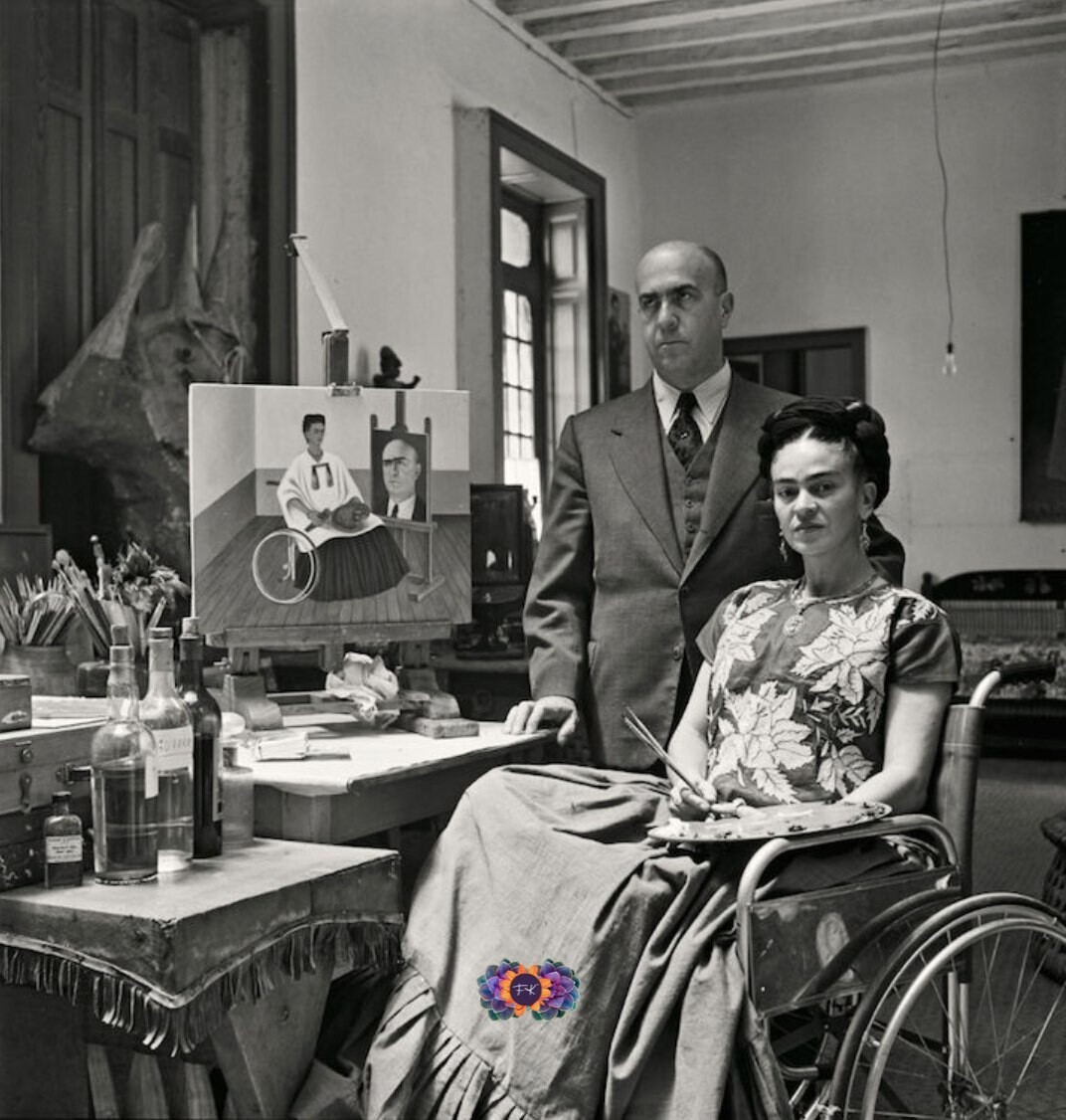 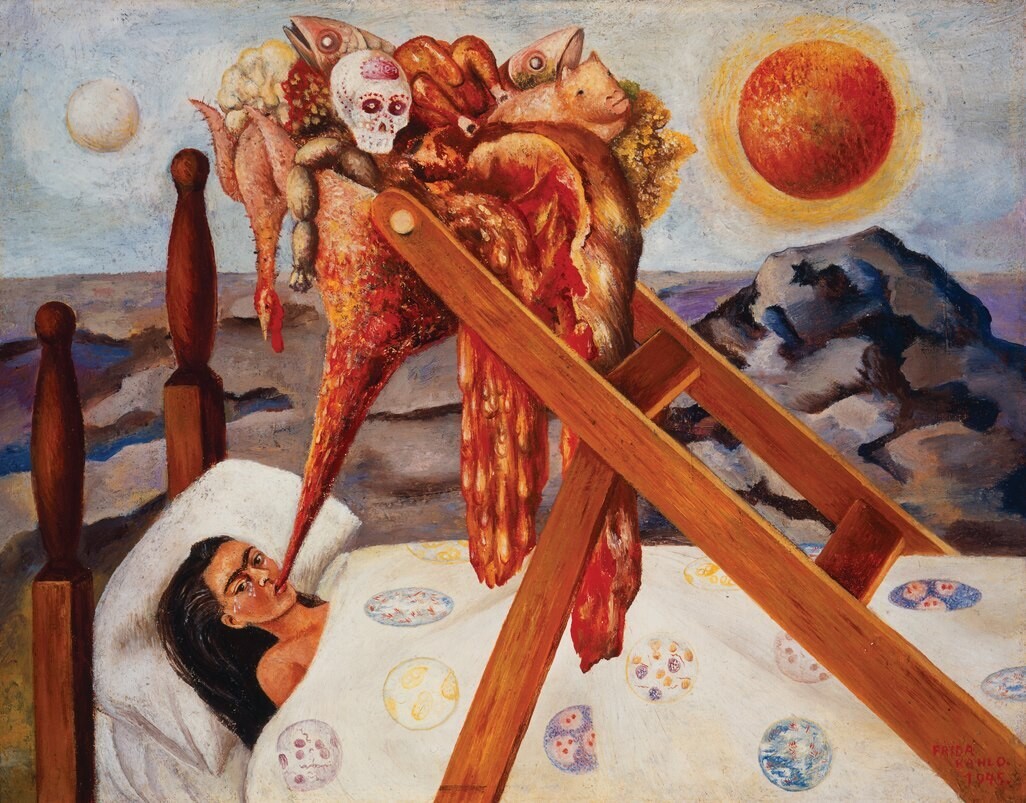 How do you deal with pain? What do you find helpful?