Living in the Philippines with spinal cord injury

Jobelle's way back to life

Jobelle (35) lives in Cainta Rizal on the Philippines, in Asia. She has been living with spinal cord injury (SCI) for 11 years.

Before she got SCI, Jobelle enjoyed her life. During her college days, she would go everywhere: she would tour a lot to places in the Philippines, and she would often visit her family in other provinces. She graduated from college. Then, months before the accident, she started working at a hotel.

In April 2011, she got into a motorcycle accident. At first, the doctor thought she had become bedridden; therefore, Jobelle was given titanium braces in her spine. However, one month after the surgery, they saw that she had the ability to become more active. After eight months, the titanium braces were removed and Jobelle had one year of physical therapy. Afterwards, she was able to move around and work more freely. 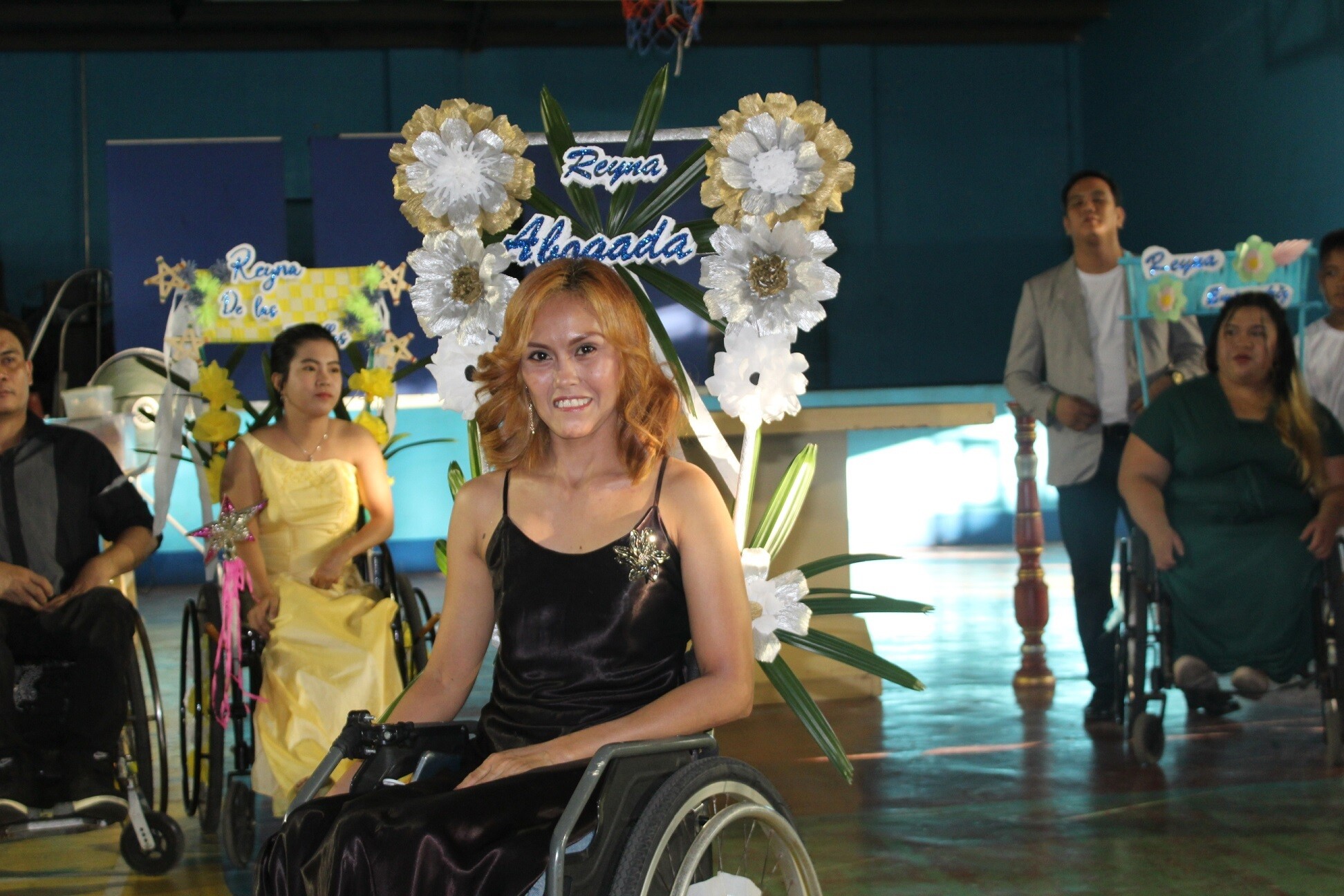 Jobelle is having fun with other wheelchair users at a party. (Source: courtesy of Jobelle)

However, in an interview for this blog, Jobelle has expressed being depressed because of her pain. It makes it difficult for her to wake up in the morning. “I am depressed about the pain that I am going though. The physical pain is very traumatic for me, until now,” she says.

Family is very important, while independence is not

Which factors make life easier for people with SCI in the Philippines? To Jobelle, her family is the most important one. For example, after the accident, Jobelle cried for months and was desperate to walk again.

“But my family told me that I'm very strong, so I don't mind that I cannot walk again because my family is always there for me.”

Thanks to her family, Jobelle was able to get through this period. And even now, 11 years after her accident, she says, “They are very important for me as a facilitator. If I cannot move myself around, they are always there for me. Even for my daughter.”

It is the same for many other Filipinos with SCI: they can count on their families to always be there for them. This support is part of Filipino culture. As suggested in this study, Filipinos do not value independence as much as people in Western countries. They are a community where it is normal and right to help each other. Filipinos with SCI are usually happy to have social supporters and helpers, and they have no issues with receiving charity.

Currently, Jobelle is a beneficiary of Tahanang Walang Hagdanan (TWH), a non-governmental organization for people with disabilities that provides rehabilitation services and sheltered employment. Thanks to TWH, she has a job packaging medicines for a pharmaceutical company. She is very busy with this job and with her daughter. Therefore, she has no time for hobbies.

On a normal day, she wakes up early in the morning, at around 4 to 5 a.m. Then she makes breakfast for her daughter. At 7 a.m., she goes to work. If she pushes herself to the limit, she can sometimes go home at 5 p.m. However, usually she has to work overtime and go home at around 7 p.m. 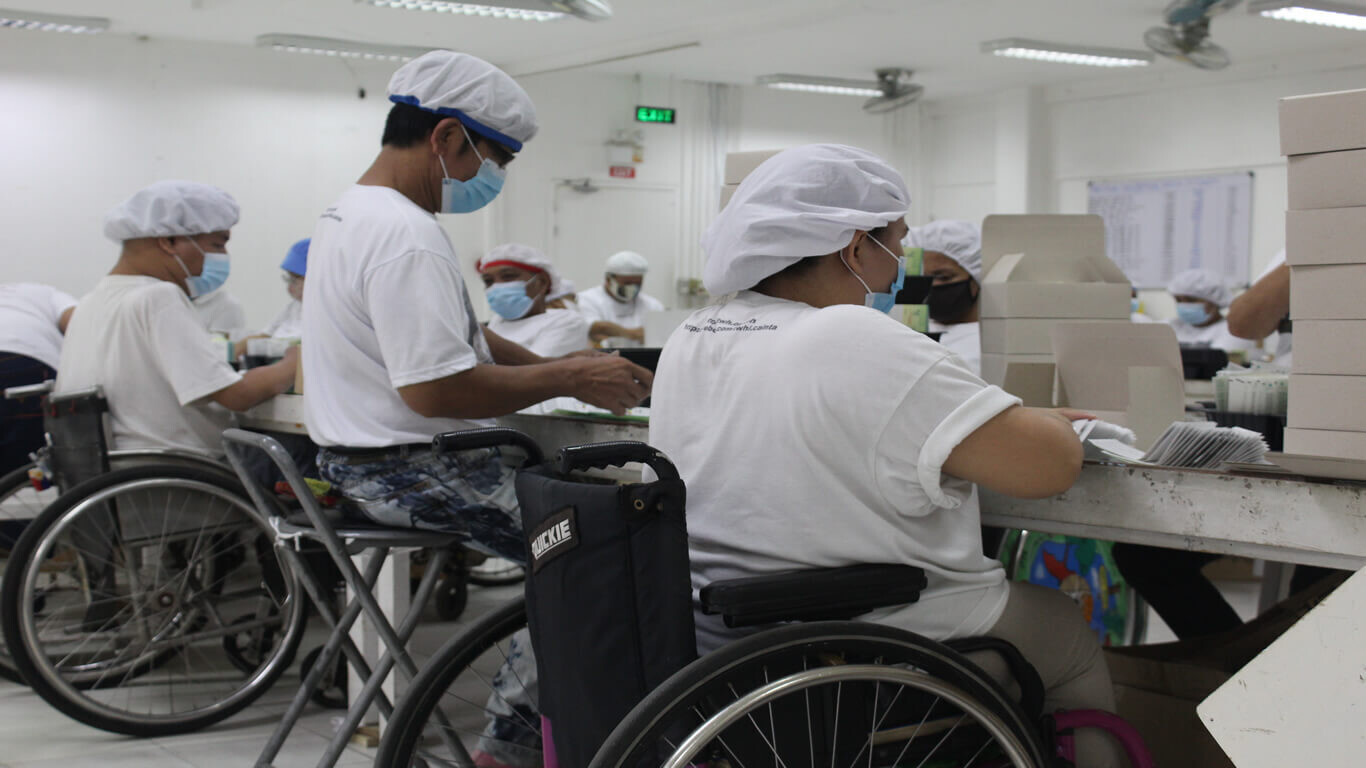 People with disabilities at TWH are working hard at the packaging area. (Source: https://www.twh.org.ph)

Despite her tough daily life, Jobelle is happy to be part of the Tahanang Walang Hagdanan organization. Translated, it means “home without stairs”. Around 90% of the people in the organization have a disability. Jobelle says that it is a community where people know and understand each other and communicate very well. They are all happy with where they are.

“It's difficult for us to work every day, but at least we live like normal people. Tahanang Walang Hagdanan gives us a normal life.”

Jobelle reports that Cainta Rizal, the city where TWH is located, is disability-friendly. The city has the highest population of people with disabilities in the Philippines, so most of the establishments are accessible and people are very accommodating. Filipinos in general are helpful and hospitable, says Jobelle. “Even if we don't ask, even if it's not there, they find a way.”

Transportation and accessibility are poor in the Philippines

Outside of Cainta Rizal, however, most public places and buildings are not accessible to people with SCI, as Jobelle states. A huge problem is public transportation. In order to get around, wheelchair users need to rent a car, which is very expensive and many disabled people cannot afford it.

Another important barrier, according to Jobelle, is that most Filipinos outside of Cainta Rizal are unaware of the needs of people with disabilities. They may want to help, but because of their lack of awareness and knowledge, they are unable to. As an example, have a look at this ramp in front of a restaurant, which is way too steep to be of any help to a wheelchair user. 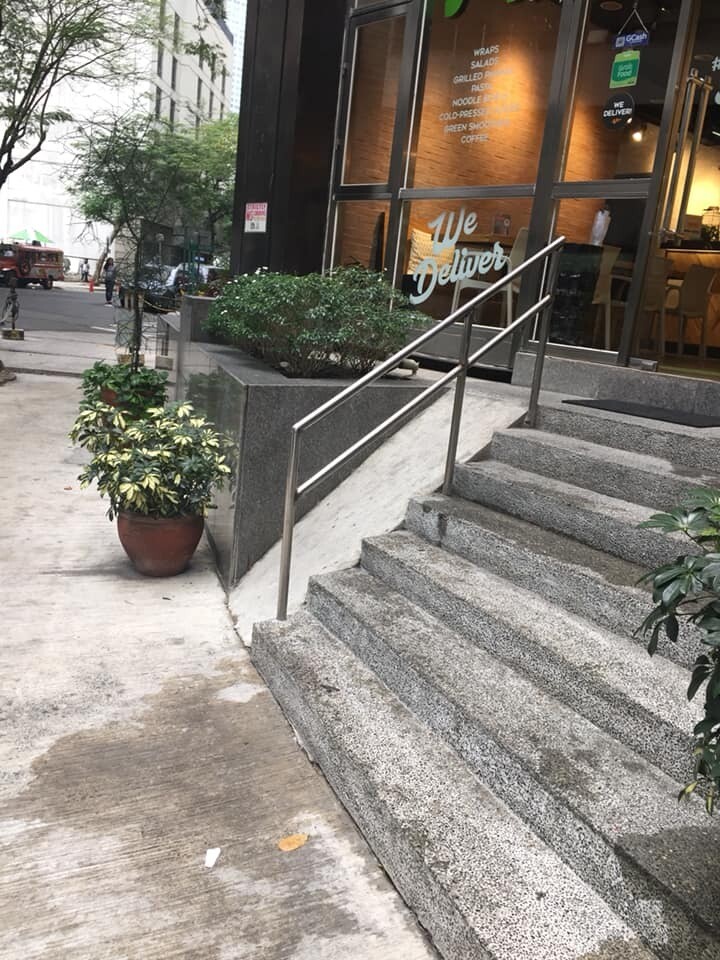 One user jokingly referred to this ramp as the “Mt. Everest of ramps”. (Source: Jeffrey John Imutan / Facebook, on https://www.thesummitexpress.com)

To make things worse, even if buildings are made accessible, it does not mean that it is forever, as this image shows. 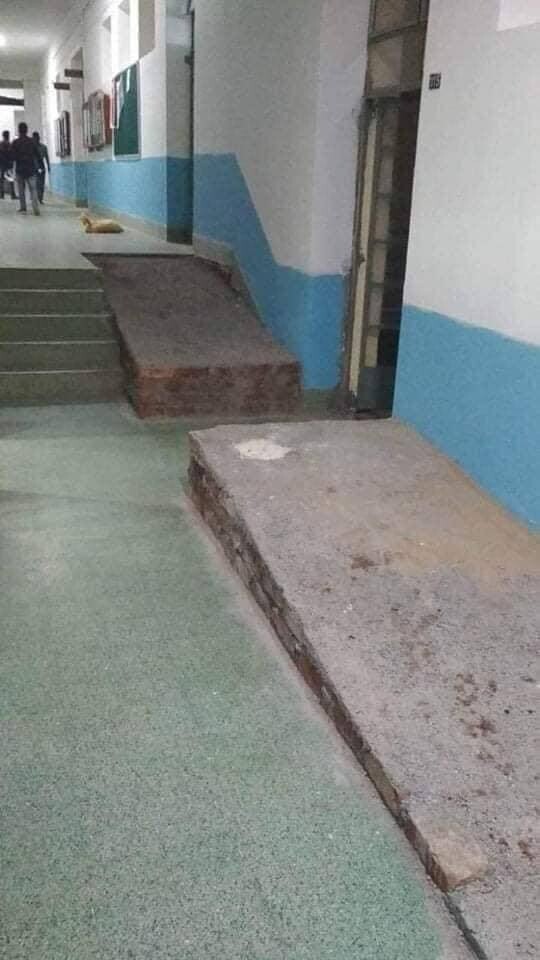 Obviously, this ramp was blocking a door, so it was just cut in the middle. User comments suggested that the ramp was now ideal for X-Games or Super Mario. (Source: Facebook @AllAboutHomesPhp)

Going outside is dangerous – and staying inside can be, too

On a first look, the video above seems positive and heart-warming. However, the man is rolling on roads made for cars, which is very dangerous. As mentioned in this study, sidewalks in the Philippines are not maintained well and are not fit for wheelchairs at all. Study participants Ted and Zaldy have expressed that they do not feel safe because they have to share a road with other vehicles. Jeffrey, another participant, reported, “I was crossing the street. When I was in the middle of the road, the stoplight suddenly turned green. A car hit me and broke my wheelchair.” 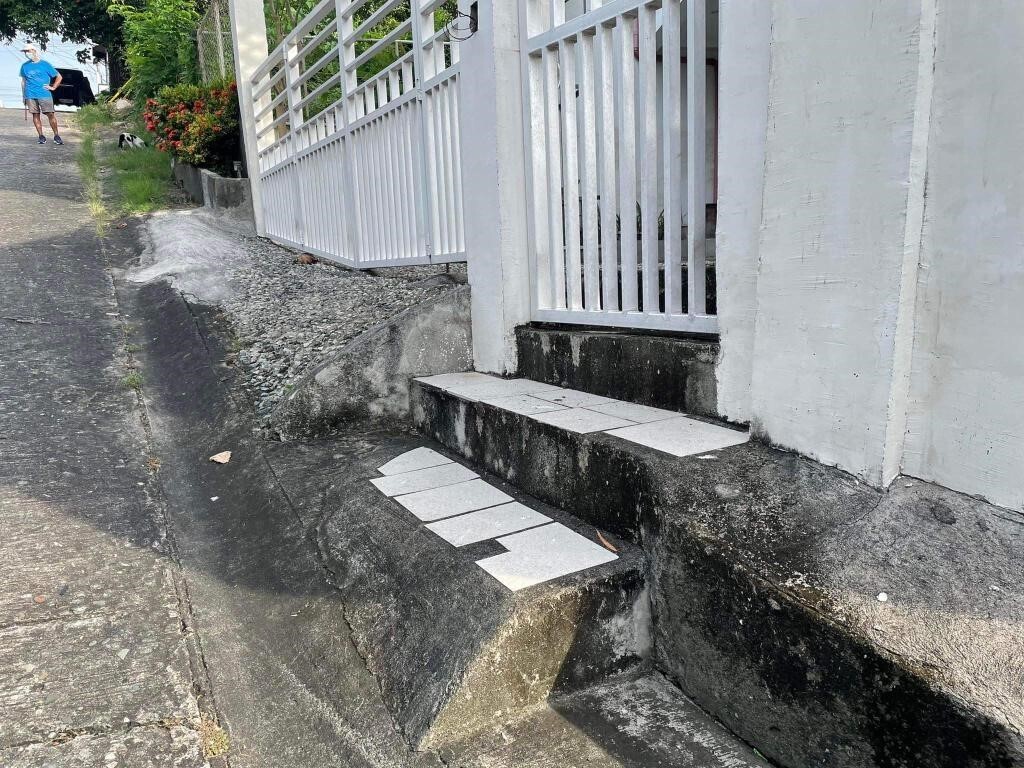 Roads in the Philippines usually do not have a sidewalk… (Source: Monina Pacheco) 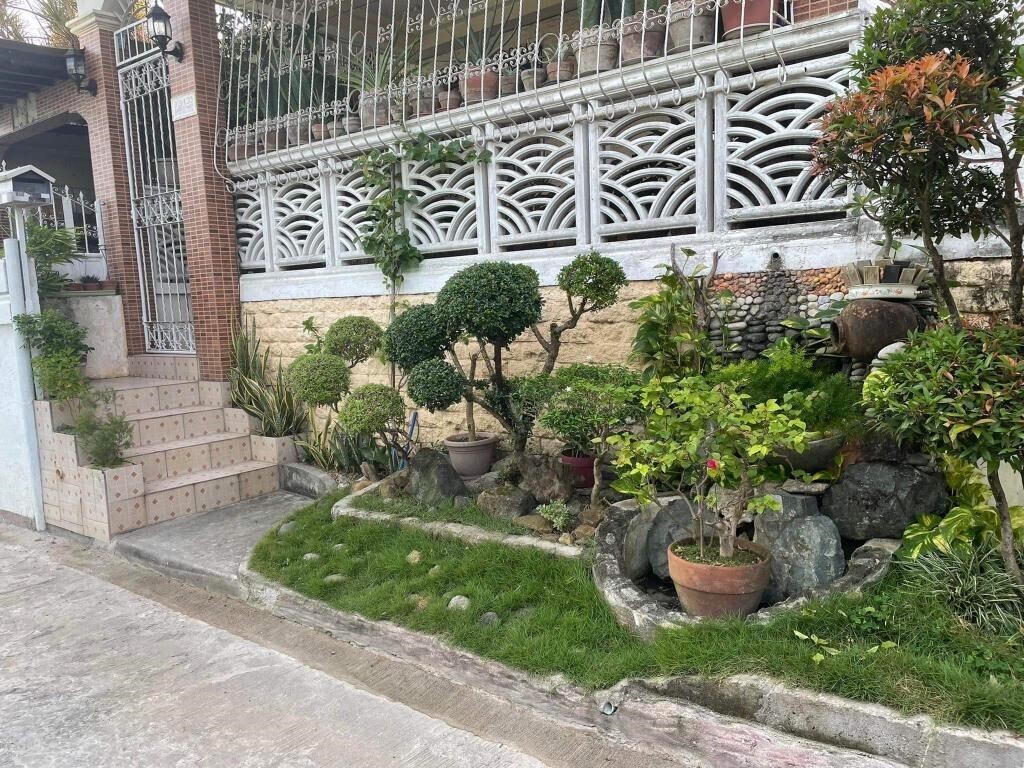 …or, if they have a sidewalk, it may be repurposed into a garden. (Source: Monina Pacheco)

Another problem for people in wheelchairs are natural disasters, which are rather frequent on the Philippines. Sometimes they cannot even leave their houses without assistance, as in the case of Bacita De La Rosa. During a typhoon, she was left alone in the house when a flood happened, and there was nothing she could do but wait for the water to recede and hope she did not drown. “All I could do was pray,” she said.

Bacita De La Rosa has been dependent on her family for almost three decades. (Source: Jason Strother / PRI, on https://theworld.org)

Another thing that affects the quality of life of people with SCI is the attitudes and prejudices of Filipino society, as the above study shows. People often think that people with disabilities are beggars or a bother; they are seen as incompetent or unproductive, and that they have to rely on their family. One believes that they cannot do anything for themselves. Study participant Jorge told,

“When I was waiting in the corridor, I was asked to leave. I replied, ‘Why are you asking me to leave? I have a meeting.’ The mentality of the staff was that all people going there are there to beg, ‘You are just here to ask for assistance’… The staff insisted that I am blocking the corridor, a nuisance.”

Even when people have a positive attitude towards people with disabilities, the lack of public awareness about their needs remains as a problem. Jobelle says that it is a good thing that Filipinos always “find a way”, no matter what. Even if the environment is not accessible, they will try to help. However, it can also have a negative impact.

As reported in this study, participant Jeana decided to go on a vacation, hoping to uplift her mood after the loss of her mother. The place did not have any ramps, and the staff trying to accommodate her by helping her through the stairs made her feel like she has not any control over her vacation. “How can I feel relaxed or at peace if I am thinking that people are waiting for me? Especially since it is past midnight. What if I wanted to go up by 1 a.m.?,” she said.

She felt like she was burdening others. She could not do the things she wanted when she wanted. She would not be able to be alone with her husband when turning to the resort.

Another example showing that the “find a way” attitude can become a problem is shown in the picture below. A man with disability had to struggle to go up the stairs of a railway station in the capital Manila, while security guards carried his wheelchair several steps in front of him. They may believe that they were helping, but the person had a hard time. 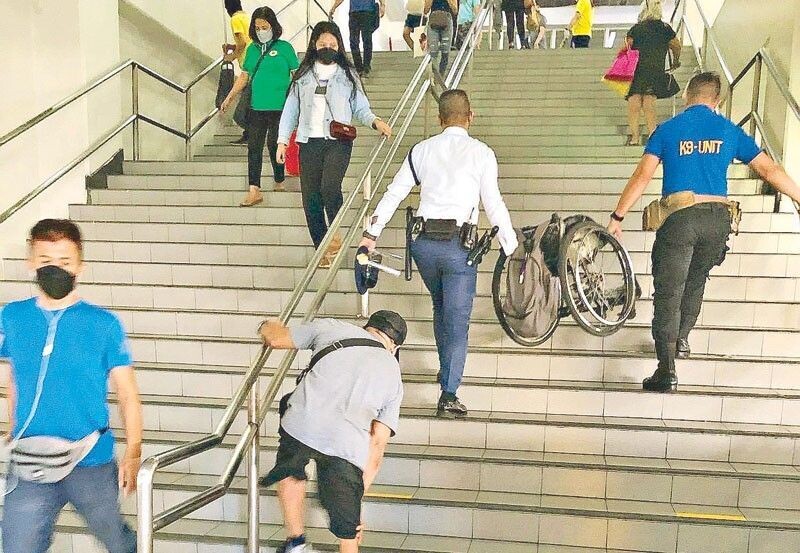 The person with disability had to suffer due to lack of accommodation and unawareness of the guards trying to help. (Source: Kevin Bola, on https://www.philstar.com)

What should be done about this?

The inaccessibility to public transport is one major barrier that Jobelle believes needs to be changed. Many people with disabilities cannot spend the money to rent or buy a car. Some are not able to have a job, while those who do often do not earn a lot of money. Therefore, public transport would be crucial for them to get to their workplace, church, and other public places.

Another big issue is the access to buildings, such as schools. As shown in the above study, schools in the Philippines are not equipped to accommodate people with disabilities and thus it is a struggle for them to gain education.

What is most important, according to Jobelle, is to increase the public awareness for the needs of people with SCI and other disabilities. She believes that that will make a huge impact on their lives, because Filipinos are very kind people who want to help, but cannot because they do not know how.

To conclude, life of people with SCI in the Philippines is quite different than in Switzerland. The structural barriers they face are much more severe, but their culture that promotes family and hospitality has given them a sense of belonging and strength.

What do you think about the situation of people with SCI in the Philippines? We look forward to hearing your thoughts.