Why disability inclusion matters to businesses

Recognizing the value of the world's largest minority group

Today many people still consider “disability and unemployment” mainly as a human rights issue affecting only people with disabilities: the world’s largest minority group. This mindset has to change, as there is growing evidence on how disability inclusion is not merely crucial to people with disabilities: it brings positive influence to businesses and would be indeed a solution for global economy and many other aspects.

The UN estimates that over 380 million of working-age people in the world have some kind of disability. In Switzerland, the estimated number of people with disabilities is around 1.7 million. As reported by the Swiss Federal Statistical Office, 68% of this population with age between 16 and 64 are employed. For those with severe disabilities, the employment rate sinks to only 42%. 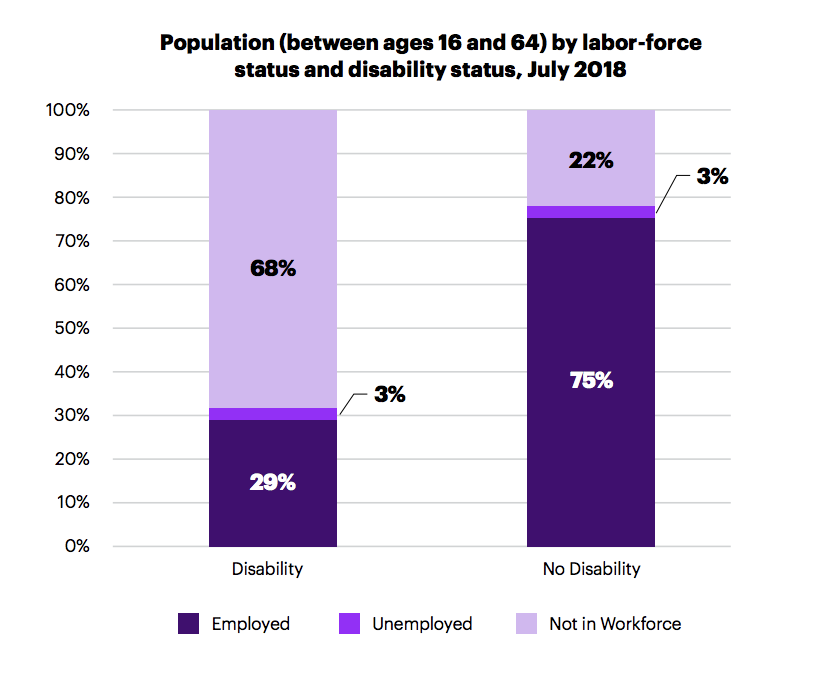 Based on data from the U.S. Bureau of Labor Statistics, the U.S. has a wide employment gap between people with and without disabilities. (Source: www.accenture.com)

A solution for the global workforce crisis

In 2014, Boston Consulting Group (BCG), a global management consulting firm, conducted a study to calculate and estimate the extent of labor shortage or surplus in 25 countries between 2020 and 2030. For ten countries including Germany, Italy and France, BCG forecasted labor shortage for the current decade. Merely in Germany, it is estimated to fall short of labor demand by 8.4 million to 10 million people in 2030. In addition, the global labor demand is expected to rise due to falling birthrates and aging populations.

Importing foreign workers is a common solution against workforce crisis in many countries. Employers often fail to reckon the talents and support a large number of locals with disabilities can offer. A research report from the U.S. estimates that a workforce of more than 10.7 million people with disabilities will be available for companies that improve disability inclusion. 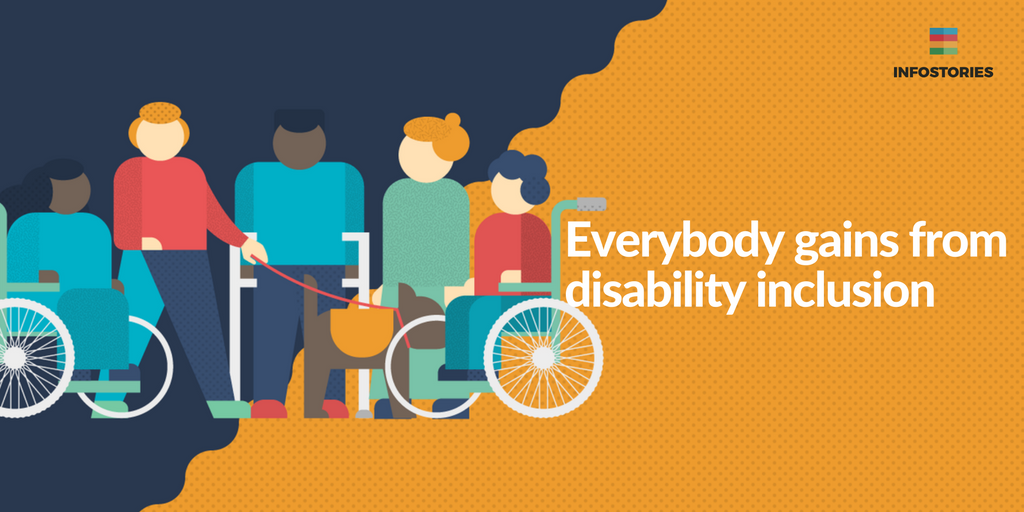 People with disabilities are the hidden gems in society. They can be a solution for labor shortage if companies are willing to do more for disability inclusion at workplace. (Source: Twitter@ilo)

As stated in the BCG's study, labor shortage would impede the economic growth, leading to wage inflation, inhibiting business formation and development. By enhancing the disability inclusion in workplace, people with disabilities will have a better chance to be gainfully employed and thus help relieve the labor shortage issue. To do so, changing people's perspective is the key.

Myths and facts of inclusion

One of these studies was carried out by Job Accommodation Network (JAN), a service funded by the US Department of Labor’s Office of Disability Employment Policy. Since 2004, they have an on-going survey with over 2700 employers in the US. 776 of them provided JAN the cost information related to accommodations made for employees with disabilities. 58% said that the accommodations needed by their employees cost them nothing, because many existing office settings were already accessible. 37% needed a one-time cost whereas only 4% said the accommodation led to an ongoing, annual cost to the company. The survey also found out that the median one-time cost for an accommodation was as low as USD 500 per employee.

In 2018, Accenture together with Disability:IN and the American Association of People with Disabilities (AAPD) conducted another research identifying the connection between disability inclusion policies and business performances. They found that companies with employee measures on disability inclusion do not only benefit from enhanced reputation, but also from increased innovation, higher productivity and improved market share. They point out,

“Having employees with disabilities across departments helps ensure that the products and services that go to market are truly inclusive.”

A great asset to companies 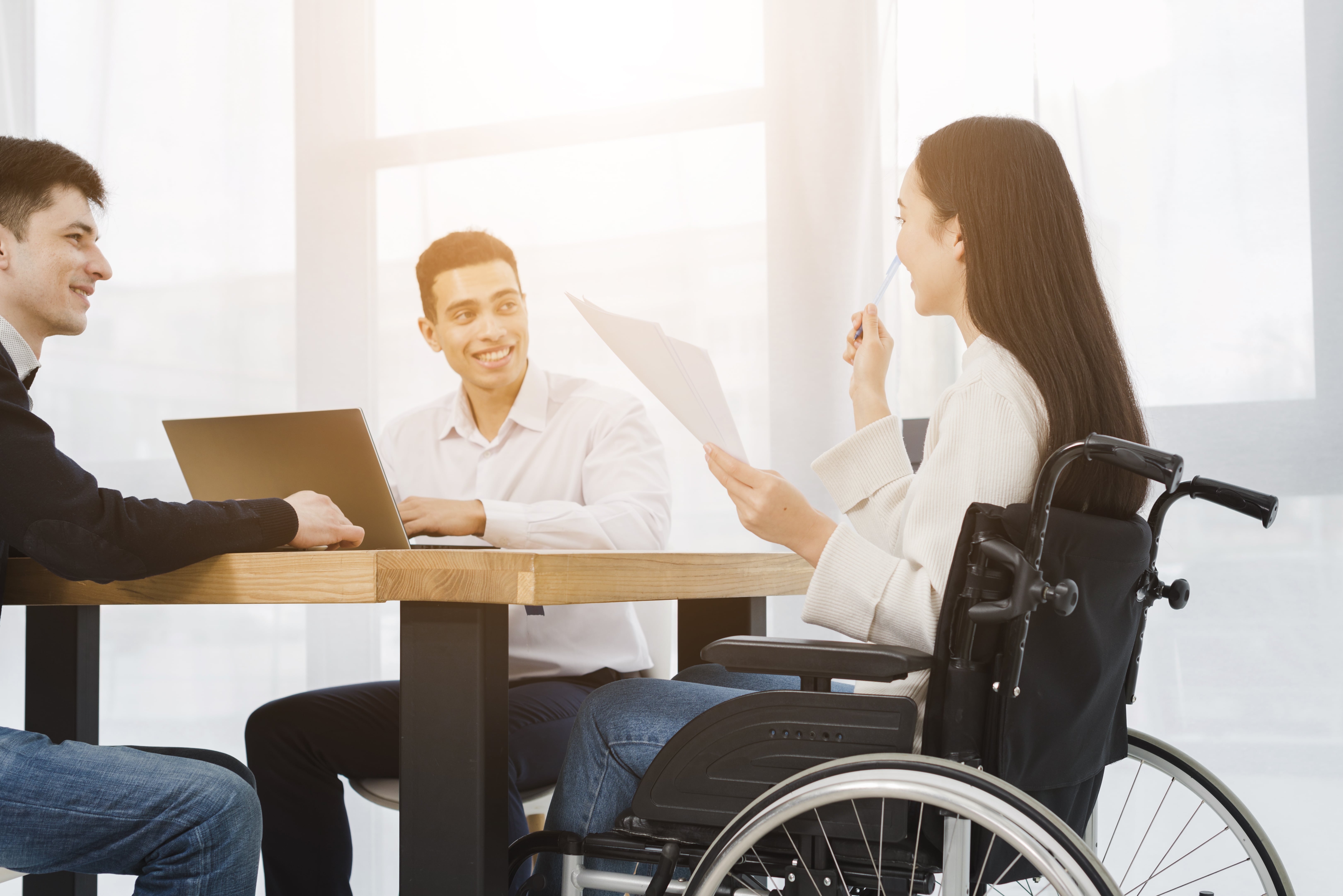 Employees with disabilities are great assets to companies and businesses. (Source: Freepik)

There are no comments on this topic yet.
Be the first to comment!
Forum
Most Recent Answers

4975 odyssita
Explaining what life with a chronic disability is like
Hi cAro, all the best for your research! I am very curious to hear about the results once they are being published. Thank you for researching this...
6 odyssita 2018-05-02

4855 Wheelie
Scewo
Good news for all who would like to try out the Scewo by themselves: according the Scewo constructors, the feedback on their invention was so...
5 Johannes 2018-03-12

Ask the Expert
Most Recent Answers

3040 marcomonteverdi
Life after operation
Dear Marco!   If the raising headaches are new and lasting for days despite of the medication you have been taken for months after operation...
3 Dr._Hans_old 2015-07-20

2633 neilvdm_old
Second opinion
Dear Neil!   There are many reasons that are influencing the choice of a Spinal Injury Rehabilitation Centre. I have seen many of them...
3 Dr._Hans_old 2015-05-07

Simea_ 2020-05-23 In Science
Aquatic therapy
What are the benefits for people with spinal cord injury?
0

kitwan 2020-06-03 In Portraits & Stories
The eye-catching disability icebreaker
Wheelchair covers that spark conversations and connections
0
Wiki
Most Read
5 In Body & Complications
Anatomy and physiology of respiration
Breathing is the most normal thing in the world for us. We hardly think about it, even though we breathe in and out about 20,000 times per day. We breathe more when we are active and exerting ourselves, and we breathe less when we are...
1 In Health & Sexuality
Social skills increase quality of life
Today strawberry yogurt is on Anna’s* grocery list. In front of the dairy section she notices that she cannot reach the yogurt sitting in a wheelchair. Many stressed people are rushing through the crowded store during rush hour and she does not...
1 In Daily Life & Mobility
Mobilisation / Transferring
What do I need to consider with regard to the shoulders? The shoulder is the most heavily-strained joint with regard to mobilisation – that applies to sitting up and transferring. It is therefore important to protect the shoulders whenever it is...
About the Community
Most Recent Topics
2020-04-27 In Latest
Backcountry skiing as a paraplegic with WIITE
Certain sport activities seem to be fantasies to resume when one becomes paraplegic. Now, however, it's one less: an avid fan of winter sports who is paralyzed from the waist down has recently...
0
2020-05-12 In Latest
Crip Camp on Netflix: relive the disability revolution in the 70s
Looking for a new Netflix show to watch? Check out "Crip Camp: A Disability Revolution", a new documentary about Camp Jened: a summer camp for youngsters with disabilities back in the early...
0
2020-05-19 In Latest
Globi, robots and Swiss Paraplegic Centre: a new book!
Globi is on an adventure again! This time the popular Swiss cartoon character makes his first visit to Swiss Paraplegic Centre (SPC) in Nottwil. He visits his friend Nik who rehabilitates at SPC...
0