Zero Discrimination: Between Dreams and Reality

The truth behind the “superhumans” story

Today is Zero Discrimination Day – an annual worldwide event first established in 2014 by the United Nations (UN) to combat discrimination against people living with HIV/AIDS. Since then, the day has been celebrated every year to promote equality in everyday practice and legislation, not only for HIV/AIDS but universally. However, how is the situation of discrimination in society today?

Remember the glorious video “We're The Superhumans” produced by Channel 4, the British TV Channel for the Rio Paralympics 2016? Many people with disability actually found what is presented in the video contradicts to their experience in reality. Will Pike is one of them.

Will Pike, a paraplegic after surviving the 2008 Mumbai terror attack, has made a parody video responding to Channel 4’s video. Unlike the video’s titled track “Yes I Can”, Pike showed humorously how even basic daily activities are made difficult because of the inaccessibility at different places.

Ridiculously, Pike is just one of the many experiencing such inequality. Last September, the British newspaper The Guardian invited seven people with different disabilities to keep diaries for a month to document the reality of being disabled in Britain nowadays. To their own surprise, four participants shared that the diaries make them realize how serious the inequality they actually face is every day. 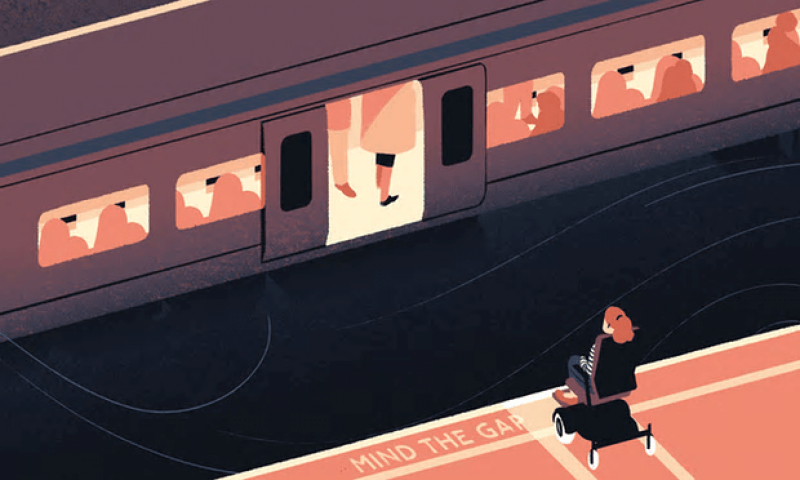 Still more than a gap between people with disability and the society. (Illustration: Tommy Parker at Synergy)

These diaries highlighted a few common issues which make people with disability physically and mentally “left behind in society”:

If we have to define a universal disability which the society suffers from, one of the seven diary keepers has described it perfectly: the most basic needs of disabled people are neglected “in a manner that wouldn’t happen if they were needed by everyone”.

Then comes the question: how do we overcome discrimination? The article “Top 5 Ways to Overcome Discrimination” from Huffpost concludes that the best solution against discrimination is to start with OURSELVES!

Here’s a good demonstration of strategies mentioned in the article – watch this TED talk by Liam Doyle, an active disability advocate from the US:

We cannot overcome discrimination alone and we must speak up for equality. Like Liam points out at the end of his talk, one doesn’t have to be in a wheelchair to be a disability advocate. It is possible for us to overcome challenges, be it physical or mental. And through this process, we may find the strength we have, which we didn’t think we had!

We invite you to speak your mind and share your experience on discrimination in our Community devoted to spinal cord injury advocacy.