Challenge yourself with these adrenaline-pumping activities

Extreme sports are commonly known as sports that are relatively dangerous and exciting. They often involve speed, height, a high level of physical exertion and highly specialized gear.

What people may not know: the choices of such sports are not necessarily fewer for people with limited mobility. In fact, if you want, there are a variety of extreme sports you can do in wheelchair or even without your wheelchair. Let’s check out some of them and see what you think.

Looking for sports to do without your wheelchair? Try tandem skydiving. During the fall you will be securely harnessed to a fully qualified skydiving instructor and guided through the whole process of skydiving.

Many find tandem skydiving irresistable because of the special feeling of using and not using your body during the freefall. A wheelchair user shared after his skydiving, “travelling extremely fast using your body as a vehicle without any energy is an exhilarating feeling”.

Since adaptation and type of landing vary according to one’s disability, special skydiving preparations are necessary. All these can be done with specialized companies – for example, a company in Germany offers tandem skydiving to people with paraplegia. This video shows how it’s like to skydive with paraplegia: 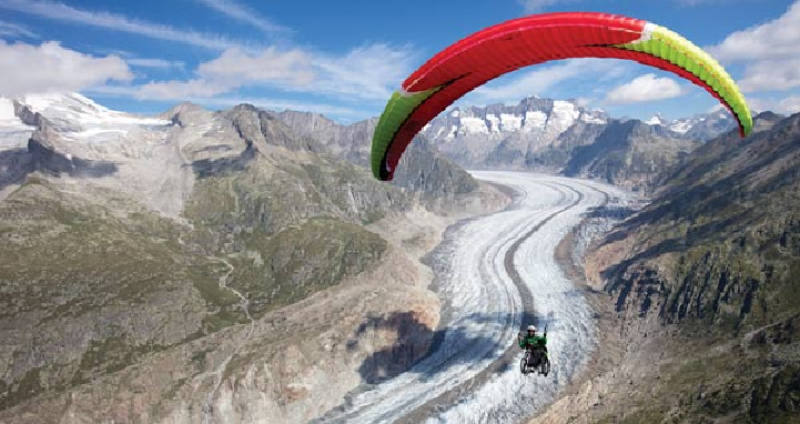 If skydiving is too extreme for you, you may try paragliding. Instead of a incredibly fast freefall, paragliding offers you more time to enjoy your surroundings while soaring through the sky in wheelchair.

Here’s a video of a lady paragliding solo in wheelchair. In fact, she did the paragliding in Mauborget, in the canton of Vaud in Switzerland. 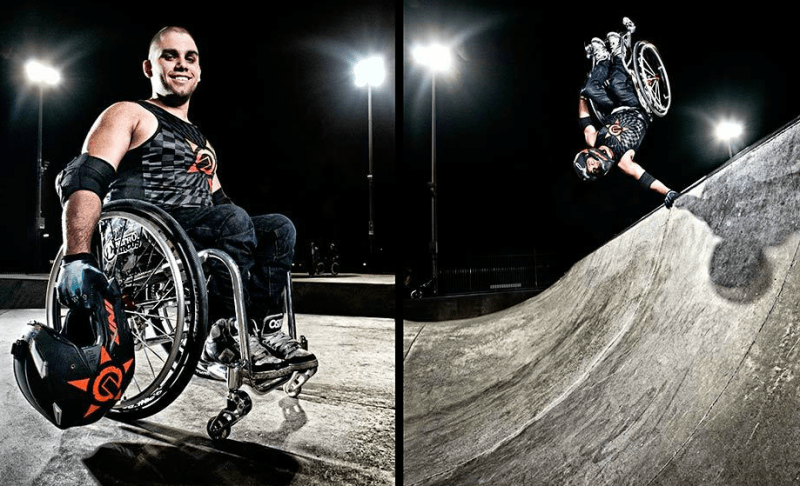 As suggested by the word “Hard Core”, this sport is definitely more than sitting! “Hard Core Sitting” is a term created by Aaron Fotheringham for any extreme wheelchair sports but it is mainly used to refer to wheelchair skateboarding. Fotheringham was born with spina bifida and became a daily wheelchair user since the age of 8. His name is associated with many records and amazing performances in wheelchair skating – for example, he made history with the first back-flip in wheelchair ever done.

Compared to the time when Fotheringham started wheelchair skating, there are now more choices of special equipment such as grinding bars and wheelchairs with suspension. They soften the ride and take most of the shock out of the landing, which makes the sport safer than before. 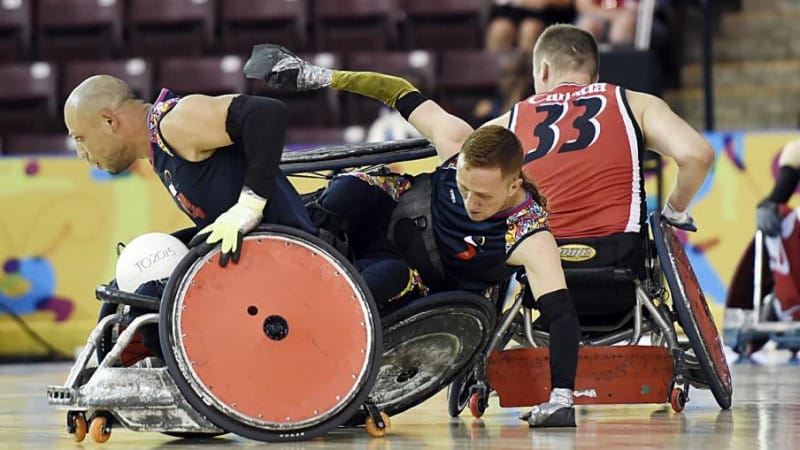 Conventional rugby is usually not considered as an extreme sport. However, one may think differently for wheelchair rugby. Originally called “murderball”, wheelchair rugby is certainly one of the most extreme and aggressive contact sports in wheelchair.

Developed in Canada in the 1970s, wheelchair rugby combines the elements of rugby, basketball and handball. In teams of four, players compete to carry the ball across the opposing team’s goal line. Players are allowed to use their wheelchairs to block and hold opponents. Men and women compete in the same teams and the same competitions.

Wheelchair rugby is practiced in more than 25 countries and it has been an official summer Paralympics medal sport since 2000. Over the years, numerous IWRF World Championship Qualification matches and International Lowpoint Rugby Tournaments have also been held at the Swiss Paraplegic Centre (SPC) in Nottwil.

Last year, Swiss Wheelchair Rugby has made a video at SPC, where players of different national wheelchair rugby teams shared their experiences:

What are your experiences with extreme sports? If you don’t have any, would you give it a try?

[thanks to kitwan for editing this article]