Learn about the "inventor" of flash mobs, how to organize one, and, of course, watch many great performances of people in wheelchair

This article should have been published more than two years ago, when the coronavirus suddenly appeared. After that, the timing for this topic was obviously bad. Today, although Corona has not disappeared, we think that the time for publishing this article has finally come 😉.

There you are, sitting at the main train station of Zurich ready to enjoy your “Ghackets with Hörnli and apple mousse”. You are minding your own business when suddenly music begins to play, and many people appear from out of nowhere and start to dance. You probably ask yourself or the person sitting next to you, “what on earth is going on?” It’s a flash mob!

A flash mob, as you might already know, is defined as “a group of people who arrange, by email or mobile phone, to come together in a place at the same time, do something funny or silly, and then leave.” However, where does this idea come from? 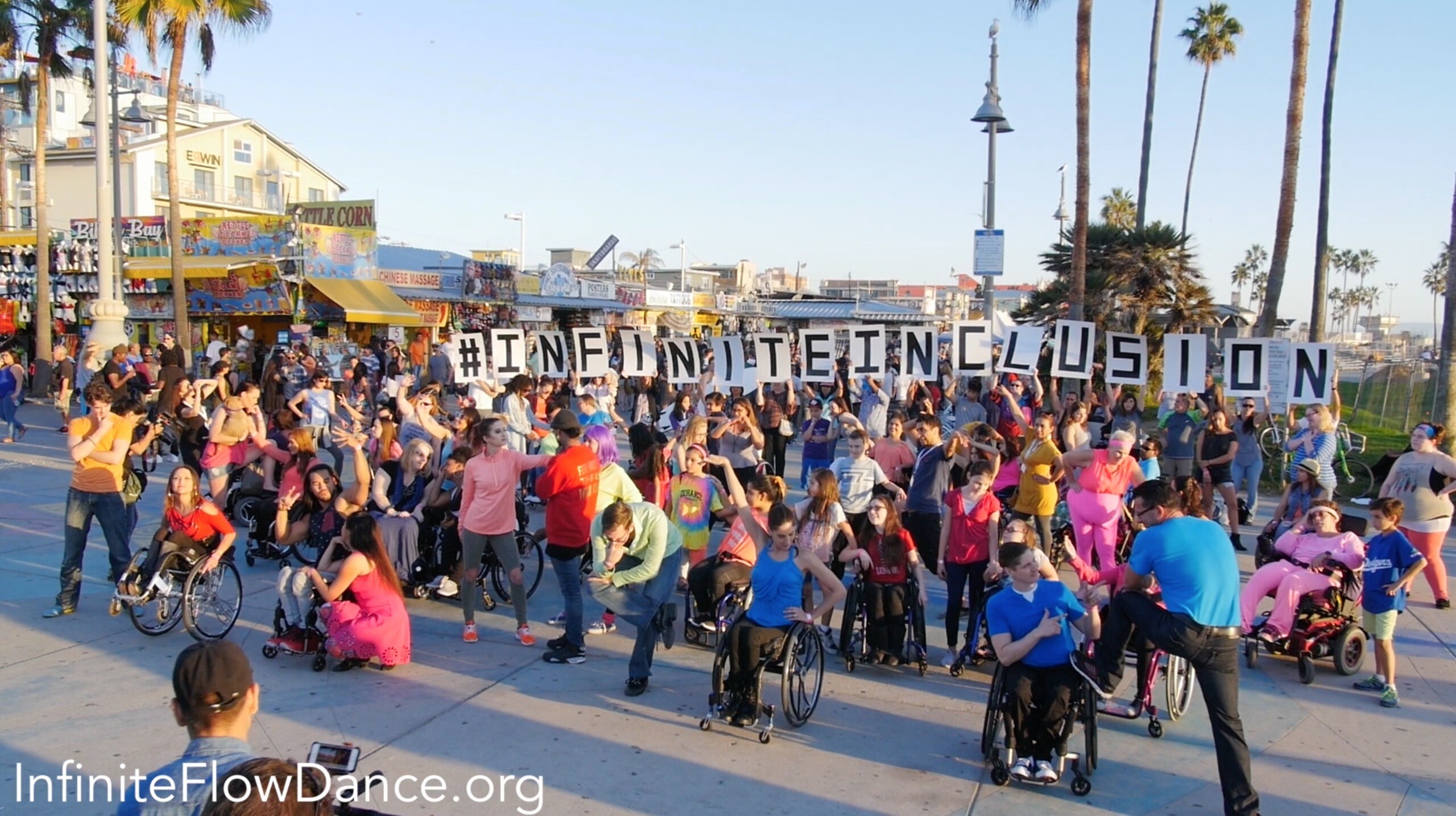 Nowadays we associate flash mobs with music and dance; however, the flash mob movement started with completely different "performances".

How the flash mob movement started

The first flash mob was in 2003 when a New Yorker, Bill Wasik, began to think what would happen if many people at the same time would do something unexpected in public spaces. Therefore, he contacted around sixty people on his email list, trying to form the first flash mob. Unfortunately, this attempt was unsuccessful because the retail store where the flash mob was supposed to take place was tipped off about the plan.

Two weeks later, around 200 people wandered over Macy’s carpets department and, as instructed, informed the shop assistants that they all lived together in the same commune and that they were looking for a “love rug”. This was the first successful flash mob.

Bill Wasik explains that he started this kind of movement because he was bored and wanted to do a social experiment. In brief, he wanted to investigate the concept of deindividuation, i.e. whether people who feel anonymous, such as in a crowd, are more likely to do things that they normally wouldn’t do.

His first experiments were a mix of stylish small talk and silent demonstrations. According to Wasik, the corporate and advertising world has changed the path of the mob phenomenon by adding music and choreography and turning this performance into what we now know as a flash mob.

Core elements of a flash mob

Here are the five most important elements that you need to consider if you would like to organize a flash mob yourself.

The venue where the flash mob will take place is really important. It needs to be a public space, and it would be best if it’s during peak hours as you need an audience for your show!

In the following video, the flash mob is done by Infinite Flow, an inclusive dance company, on L.A.'s world-famous Venice Beach Boardwalk.

You have infinite options here, either you can play music through speakers, do a live concert or even sing it yourself. Remember to pick a piece of music that suits the purpose of the flash mob. Ask yourself do you want to take a stand on an issue or do you just want to have some fun?

In the next flash mob in London, it features the song “I am what I am”. There is no better song to express “Why not try to see things from a different angle?”

You can decide to do a choreographed dance, to mime or pose as living statues. It’s up to your purpose to decide whether it should be more structured or free in style.

In the next flash mob in Ireland, the participants are performing more freely than in the previous ones. It’s absolutely fine as long as everyone has fun.

You will need a crowd: people to whom you have to provide clear instructions about when the flash mob starts, what they have to do or what type of choreography is needed. As mentioned before, flash mobs are organized via online resources. Use social media, emails, websites and online communities to connect people for the flash mob.

In 2017, ASPAYM Comunidad Valenciana, a Spanish organization for spinal cord injuries in Valencia, organized a flash mob. Watch below how they have prepared and rehearsed before the actual flash mob took place (from 2:16 in the video) in a shopping mall.

Either normal clothing or costumes, but it’s really important that everybody is dressed with the same theme in mind.

In this case, the participants are all wearing a white t-shirt, so we can differentiate them:

And in the next one, the participants are all wearing dark sport clothes:

Oh, and most importantly, keep the element of surprise from the beginning till the end. A good flash mob surprises the audience and finishes with the participants merging into the crowd as if nothing ever happened.

You can find more detailed instructions and tips for the organization of a flash mob here and here.

The first one is from the Shepherd Center, a SCI rehab hospital in Atlanta, USA. The flash mob took place at the cafeteria of the center.

This second one is from FLM, a SCI foundation in Spain, with the flash mob happening in the physio room.

Flash mobs are about spontaneity. Their aim is to engage the audience who has no expectations in a spectacle they eventually would enjoy. So, what are you waiting for?

Gather your people and organize an event like this! I'm looking forward to a flash mob at the cafeteria of the Swiss Paraplegic Centre 😉.