It is said it’s so addictive, that if you start playing, you won’t stop. Do you dare to try?

Sport stacking has been earning international research interest because there is evidence that it improves cognitive, physical and perceptual-motor skills. Is it the first time you hear about sport stacking? No worries, it was new to me too!

Let me introduce you to the history of this special sport. It started in the early ‘80s in southern California and gained national attention in the ‘90s on the “Tonight Show”, an American late-night talk show. It then captured the attention of Bob Fox, an elementary classroom teacher in Colorado. He later founded Speed Stacks, Inc., a company which promotes and sells equipment for the sport. This company calls itself the “worldwide leader in Sport Stacking” and is now the only approved equipment provider for official tournaments of the World Sport Stacking Association (WSSA).

Sport stacking has gained more and more popularity since the 2000s not only nationally but also internationally. As a result, it is played in 54 countries in over 50,000 schools and organizations by now. 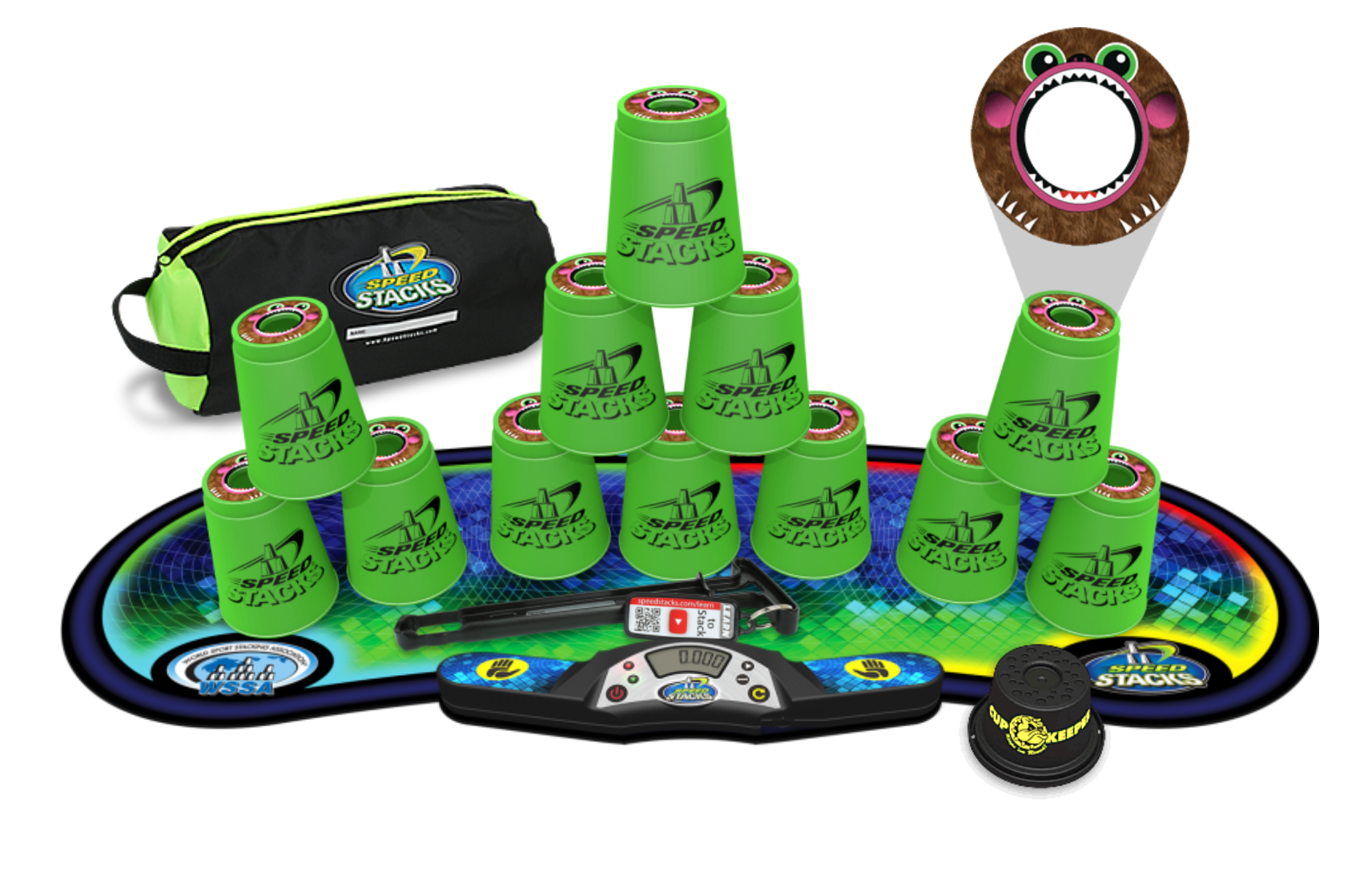 A sport stacking set. To avoid that the cups stick together, they have holes on the top. (Source: https://www.speedstacks.com/store/retail/)

How stacking is played

In sport stacking, also known as speed stacking or cup stacking, players have to stack 9 or 12 cups in predetermined sequences as fast as they can. They use specially designed cups, which allow for quicker times. Participants can compete individually or in a team and always against the clock.

Bob Fox explained that when sport stacking was just emerging, a lot of people would hesitate to call it a sport. But what has stacking that everybody who has tried it, loves it? I think in this article we can’t explain it properly – that’s why you must try it first-hand, or see for yourself.

What are the benefits of sport stacking? A research study confirms that stacking increases hand-eye coordination and reaction time by up to 30 percent. It was also found to improve fine motor skills in children with Down syndrome.

Furthermore, sport stacking helps develop not only bilateral coordination of the body but also increases bilateral proficiency, i.e. both sides of the brain and body are exercised. Higher bilateral proficiency is associated with better awareness, focus, rhythm, and creativity. Astonishingly, sport stacking was even found to improve cognitive skills, such as reading comprehension skills, among Grade 5 students.

In Spain, the foundation for people with SCI Fundación Lesionado Medular (FLM) has incorporated sport stacking into their weekly classes for three years now, and has had successful results. Iker de Isusi, the coordinator of the FLM’s sports department, said that he finds improvements in the motor skills of the participants, who are really happy to participate and compete in sport stacking.

In Switzerland, sport stacking can be practiced within the association CupMania. Yannik Tschan, the manager of CupMania, told me that their training groups would welcome people and children with spinal cord injuries any time. They also organize tournaments once or twice a year, where all kinds of people with and without disability are very welcome to see what this sport is all about. The next tournament will be on 1st of December in Baar.

If you have any questions about sport stacking, you can contact Yannik Tschan directly at This email address is being protected from spambots. You need JavaScript enabled to view it.. He will be more than happy to assist you to explore this exciting sport.

What do you think about sport stacking? Would you like to try it?