Anatomy and physiology of respiration

Breathing is the most normal thing in the world for us. We hardly think about it, even though we breathe in and out about 20,000 times per day. We breathe more when we are active and exerting ourselves, and we breathe less when we are inactive.

The oxygen inhaled is delivered to every cell in our body, no matter how small. In the cells a sort of combustion takes place resulting in the production of carbon dioxide, which is then transported out of the body.

The air flows in through the mouth and nose and is then transported through the throat and larynx. These air-transporting respiratory organs are lined with a mucous membrane and with tiny hairs called ciliated epithelium. This is where the air that we breathe in is cleaned, warmed and moistened. These organs together are also called the upper airways. 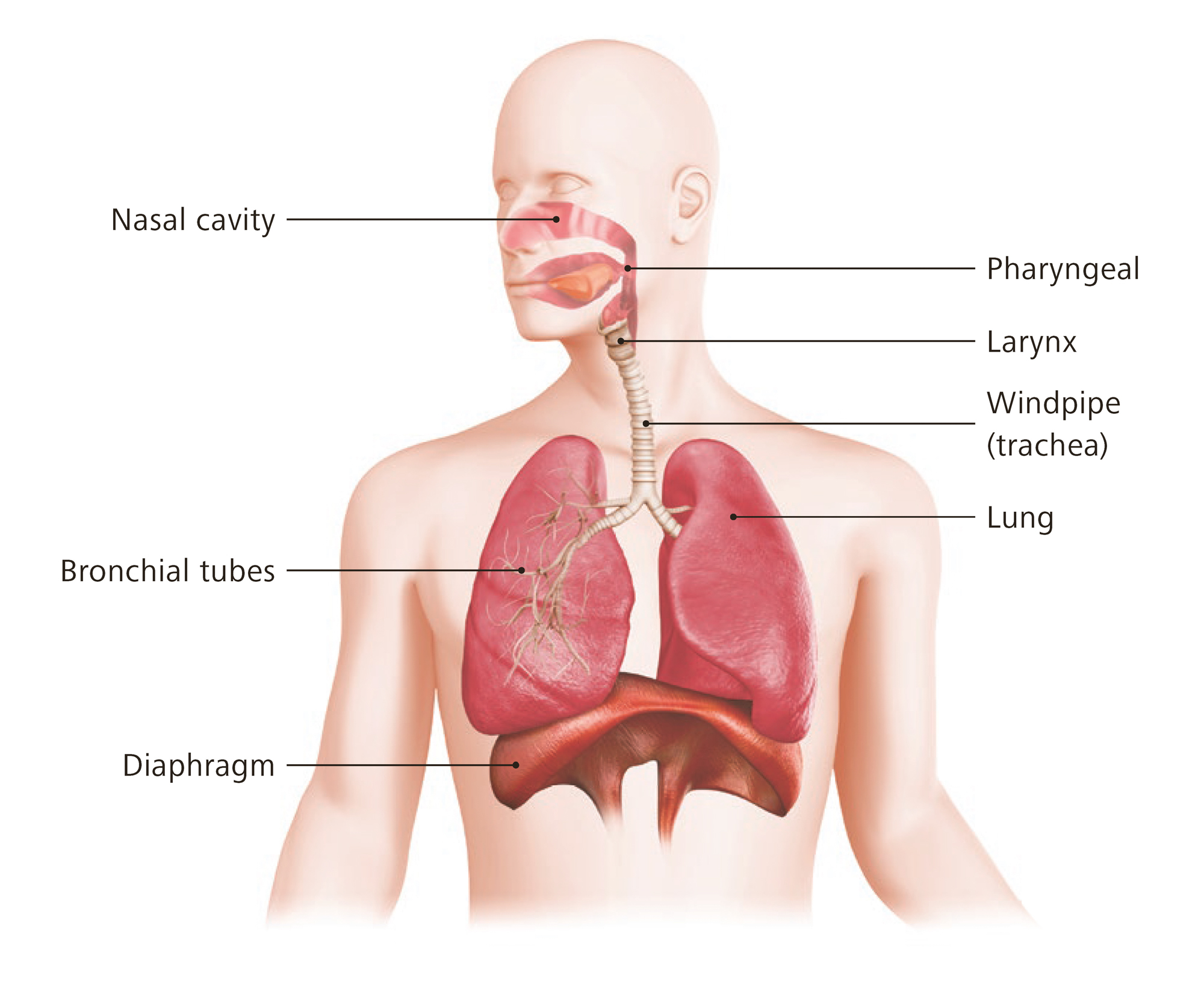 The lower airways are a kind of pipe system which can be pictured as an upside-down tree. They start with the trachea, which branches into the left and right bronchi at the level of the fourth thoracic vertebra. Then the airways branch 22 more times in both lobes of the lungs while becoming smaller and smaller. Eventually, they end in tiny pulmonary alveoli which consist of extremely thin membranes. If put beside each other, the surface area of all alveoli would be 70 to 100 square meters. The oxygen exchange takes place in the alveoli: oxygen is released to the bloodstream and the carbon dioxide, which is produced during metabolism, is absorbed by the alveoli. 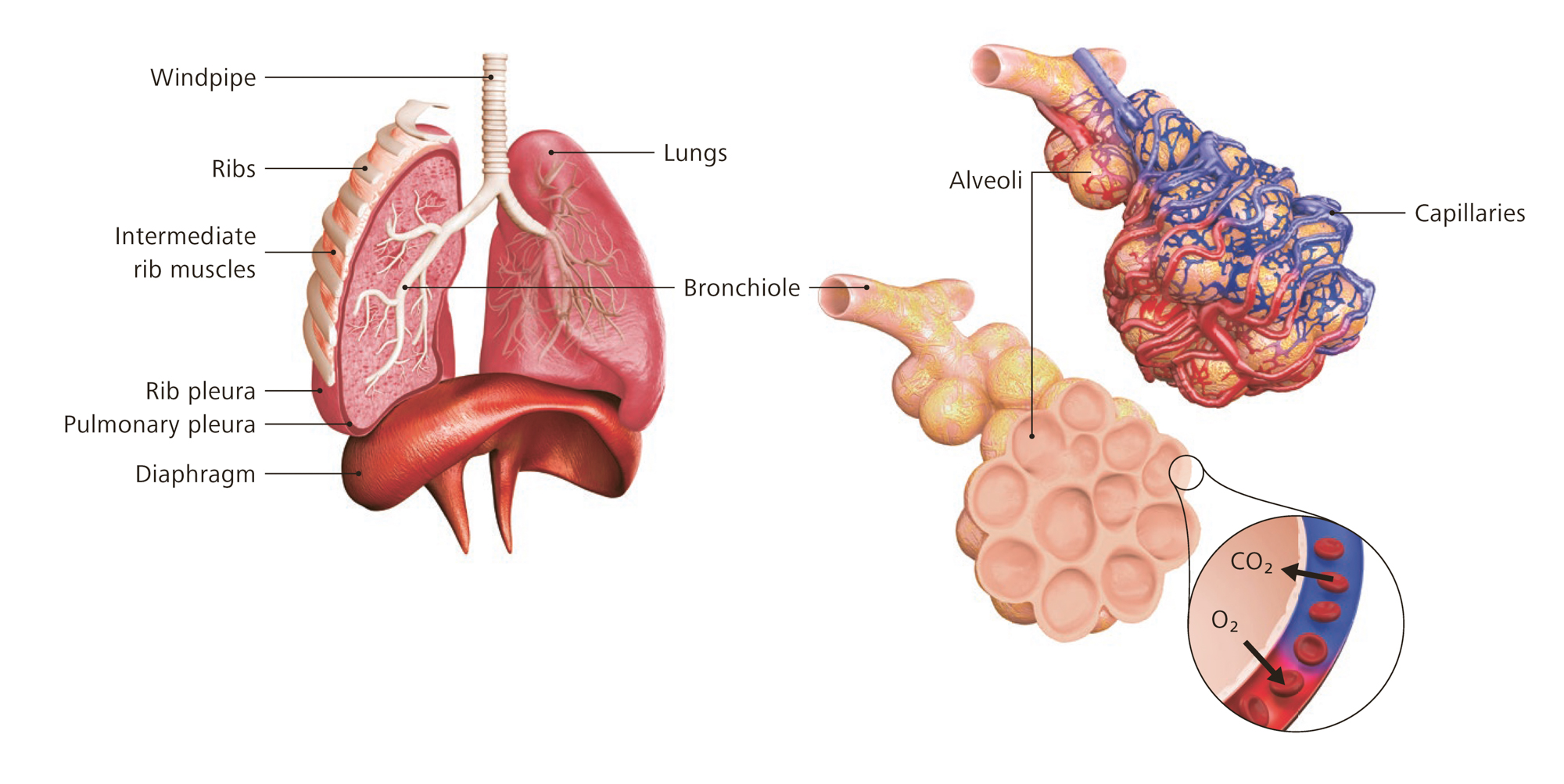 How does our respiration work?

While inhaling, the diaphragm flattens and the ribs are lifted. Within the created space, a vacuum exists so that lungs are expanded and air flows in.

This difference in pressure is essential for inhalation but cannot be created by the lungs as lungs have no muscles. Consequently, the diaphragm as the main respiratory muscle and the auxiliary respiratory muscles (e.g. outer intercostal and abdominal muscles) have an essential role in inhalation. Inhalation is therefore an active process.

Exhalation, on the other side, is a passive process. After inhaling, the diaphragm relaxes and goes back to its original dome-like shape. The muscles of the abdomen, chest and intercostal ribs relax. The ribs go down and the elastic lung tissue contracts – air flows out of the lungs.

Breathing is controlled by the respiratory centre. This centre is located at the base of the brain stem where the brain connects to the spinal cord. It is where the number of breaths, the breathing rhythm and the depth of breath are controlled.

This control works through various mechanisms such as the diaphragm nerve, the nerves of the auxiliary respiratory muscles and chemical processes in the blood (i.e. changing of the oxygen-carbon dioxide content).

The higher the level of the injury, the more serious the auxiliary respiratory muscles are affected. Therefore, people with spinal cord injury often have a partial or complete inhalation loss of abdominal muscle function, which leads to limited coughing ability.

Furthermore, the loss of these muscles changes the natural breathing mechanism. Since the abdominal muscles lack muscle tension, the abdominal organs sink, causing the diaphragm to flatten. The diaphragm becomes less flexible and can thus develop less strength which is necessary for inhaling. The paralysed part of the chest is no longer lifted but pulled down by the pulling of the diaphragm. Thus, the lungs are expanded incompletely and unevenly. As a result, less air can get into the lungs. The breathing volume is therefore smaller and the ventilation of the lungs becomes inconsistent. If this happens over a long period of time, the small airways may be completely excluded from the ventilation and they may collapse or “stick together”. This is one of the reasons why people with spinal cord injury might need breathing therapy. 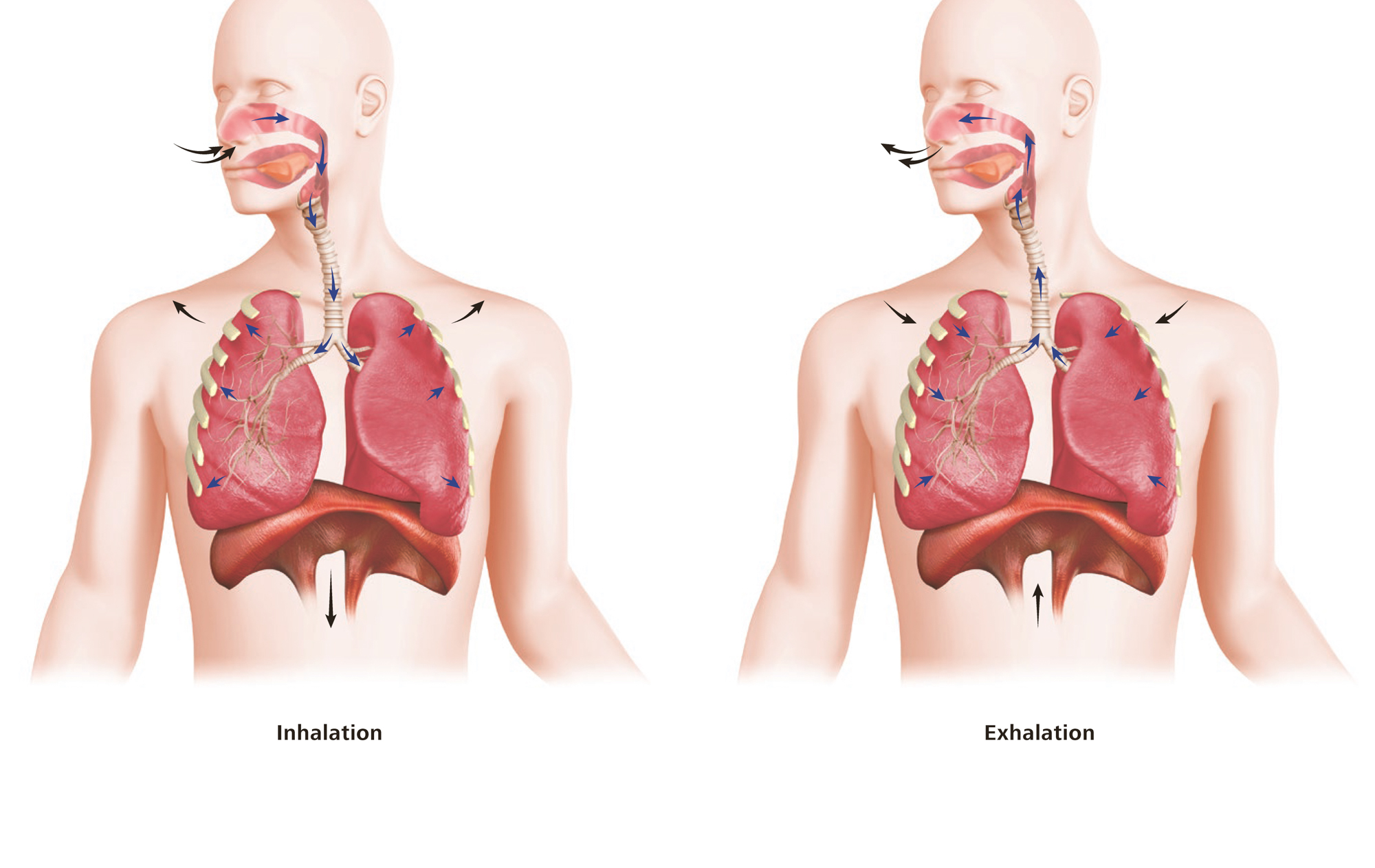 At which level of injury does breathing stop completely?

The diaphragm, which is the main muscle for inhaling, is controlled by nerves between C3 and C5. If the diaphragm does not work, autonomous breathing becomes impossible and a respirator would be needed.