Damage to the spinal cord and consequences of this

There are different elements in the movement segments which behave differently after an injury: bony structures and band structures. In bony spine injuries, we differentiate between three main types of fractures:

The bony structures may retain some of their original load-bearing capability following a compression injury. Once injured bones have healed, the position of the spine remains unchanged, enabling stability to be restored.

The ligament structures of the spine are less subjected to stress in a neutral position3. They serve the purpose of guaranteeing the stability of the spine at the limits of its movement potential. In the physiological range, the ligaments of the spine permit elastic movement with minimal resistance to deformation, and in the limit range they exhibit a high degree of stiffness.

When does paralysis occur?

Whether a spinal injury results in damage to the spinal cord depends on the extent of the injury to the spine. The spinal cord which runs along the vertebral canal is not necessarily damaged. 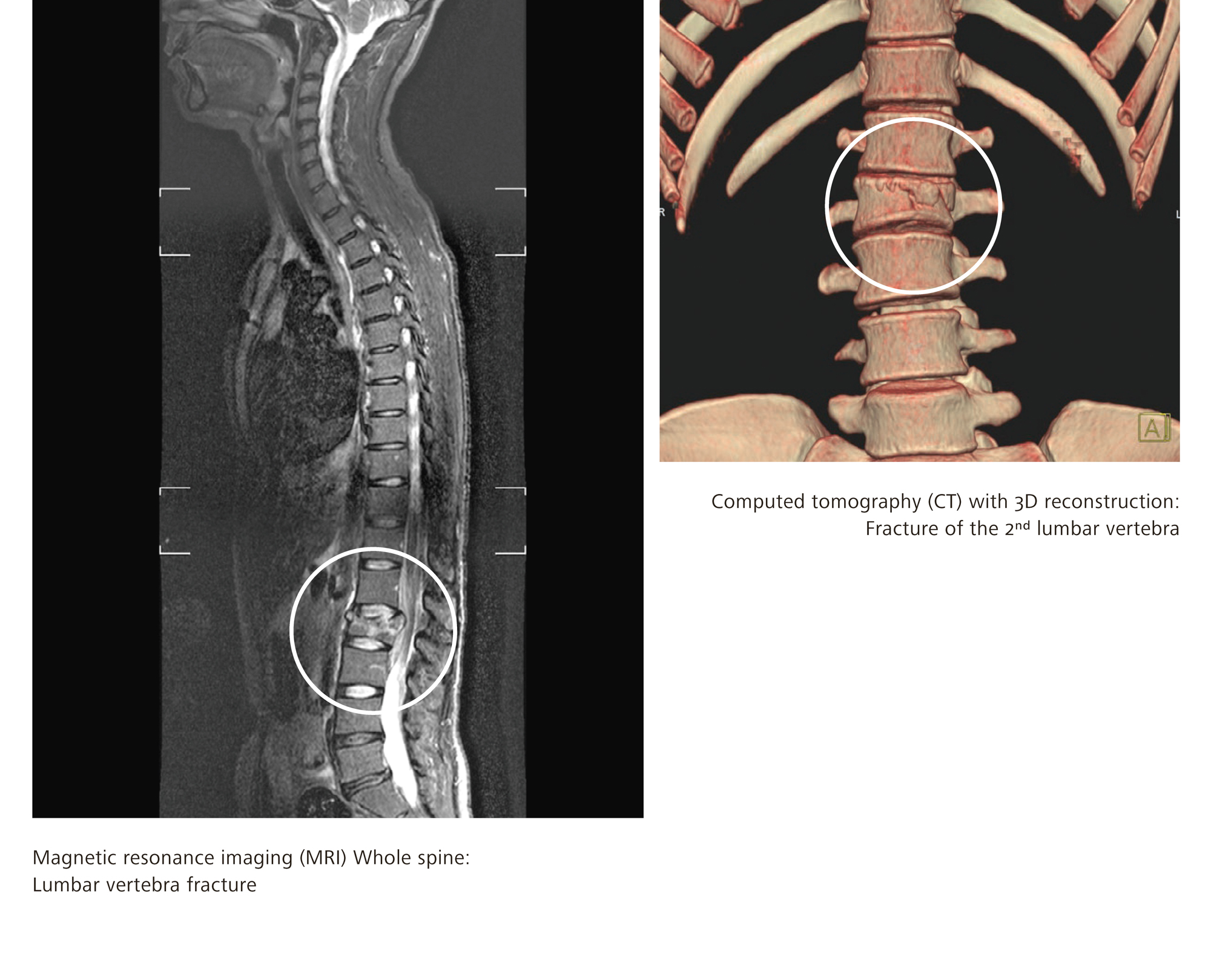 Difference between paraplegia and tetraplegia

The term paraplegia is used when the lower half of the body – legs, bottom, stomach and lower chest area – is affected by the spinal cord injury. In this case, the injury is located in the thoracic, lumbar or sacral region. People with paraplegia have unrestricted arm functions.

In the case of tetraplegia, the spinal cord is injured in the cervical region. In addition to the legs and the chest area, the arms are also affected by the paralysis. The extent to which the function of the arms is affected by tetraplegia depends upon the height at which the injury occurs. The lower down the spine the injury occurs, the more functional capability the arms will retain.

Respiratory musculature is also affected in the event of tetraplegia. If the injury is located above C3 at the level of the 3rd cervical vertebra, the breathing is so badly restricted that the person is dependent on mechanical support.

Spinal cord injuries do not only lead to restrictions in the functionality of the extremities, but also to other malfunctions in the organ systems because the nerves being supplied also run along the spinal cord. In the case of injuries above the 6th thoracic vertebra, the autonomic nervous system is also affected, which can lead to malfunctions in the circulation system. Depending on the level at which the injury occurs, spinal cord injuries frequently result in bladder and bowel disorders as well as sexual dysfunction because the nerves that control those functions come out of the bottom of the spine at the sacral region. 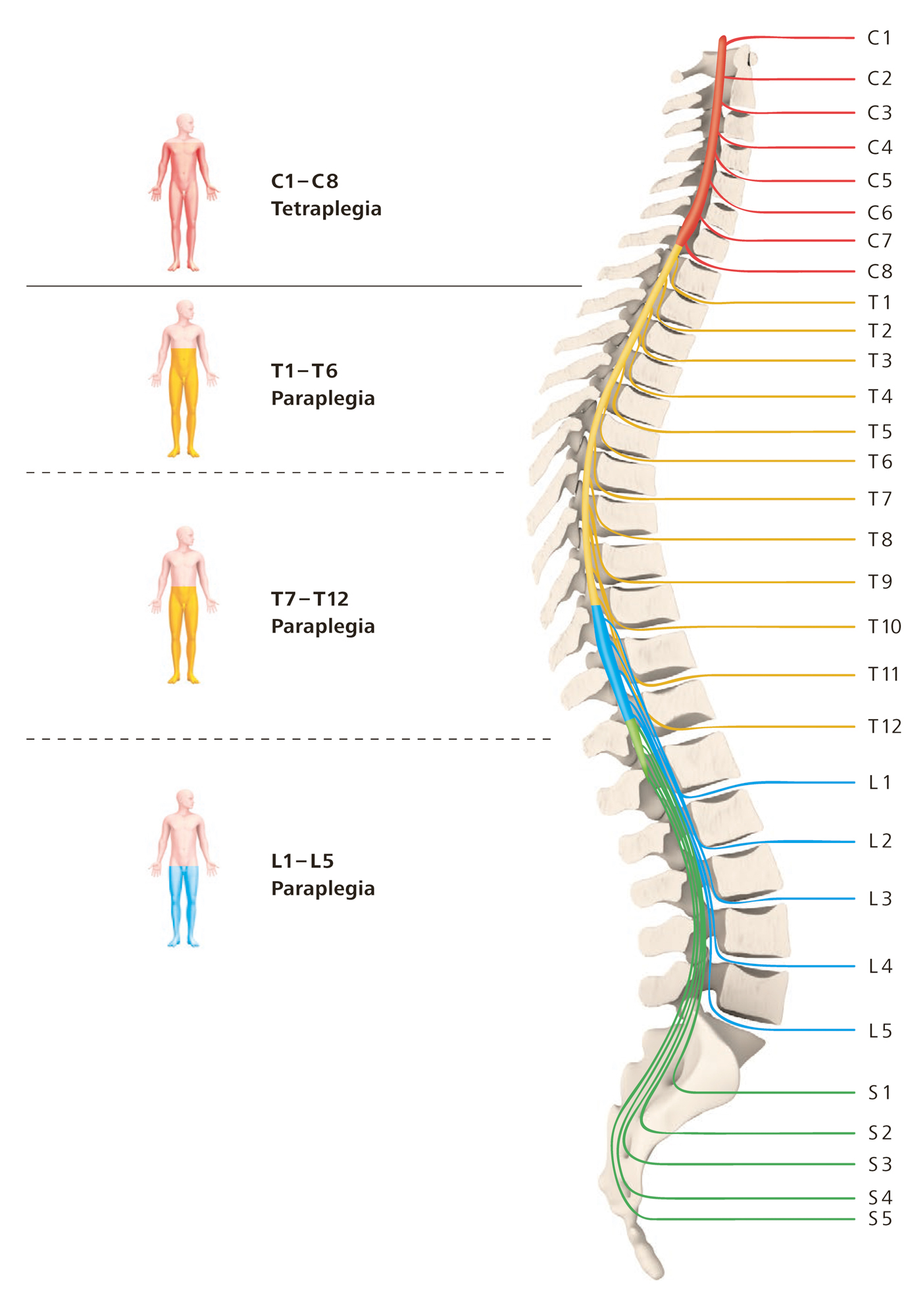 Classification according to ASIA

Nowadays, complete or incomplete paralyses are categorised from A–E according to criteria laid down by the ASIA (American Spinal Injury Association).

AIS A Complete paralysis, no motor or sensory functions.

AIS B Incomplete, sensory functions preserved but not motor functions below the level of the paralysis.

AIS C Incomplete, sensory and motor functions preserved below the level of the paralysis, but the key muscles are so weak that they cannot be used functionally.

AIS D Incomplete, sensory and motor functions preserved below the level of the paralysis; there is so much strength in the key muscles that they can be used functionally (e.g. standing up for transfers, possibly walking with mobility aids).

In addition to traumatic injuries, a number of diseases can also lead to spinal paralysis. The most frequent are tumours, circulatory disturbances, infections and inflammations such as multiple sclerosis. In these diseases, some of the bony structures remain intact, in which case the damage only affects the spinal cord. The spine may also be affected by inflammations or tumours.

Rehabilitation is frequently made difficult by the primary disease. Consequently, the person’s health can keep changing after a tumour disease. The objectives of rehabilitation must be defined depending on the disease and the subsequent treatment must be planned well and looking ahead. In many cases, the increased susceptibility to fractures due to tumours must be taken into account.

1 Close to the stomach

2 Close to the back

3 Position in which maximum movements are possible in all directions