What does invasive respiration mean?

For people with spinal cord injuries with a lesion at a level of C4 or higher, breathing is inadequate, or there is a complete absence of it. As a result, people affected are dependent upon invasive respiration – invasive because the respiration takes place through a tracheostomy tube which runs through the neck directly into the airway.

This is the most frequent form of respiration that is applied. It is easier for the person to tolerate than volume-controlled respiration because excessive pressure is unable to form. The following two pressure levels are set:

The tidal volume results from the difference between the two pressure levels. However, this reduces as the airway resistance rises, e.g. based on the presence of a secretion.

In this form of respiration, a certain tidal volume is applied to the lung within a certain period of time which can be set. In this form, very high peak pressures can arise because the respirator1 only monitors the volume being applied. Previously, this form used to be applied frequently in the intensive care unit; however, this is rarely the case now. 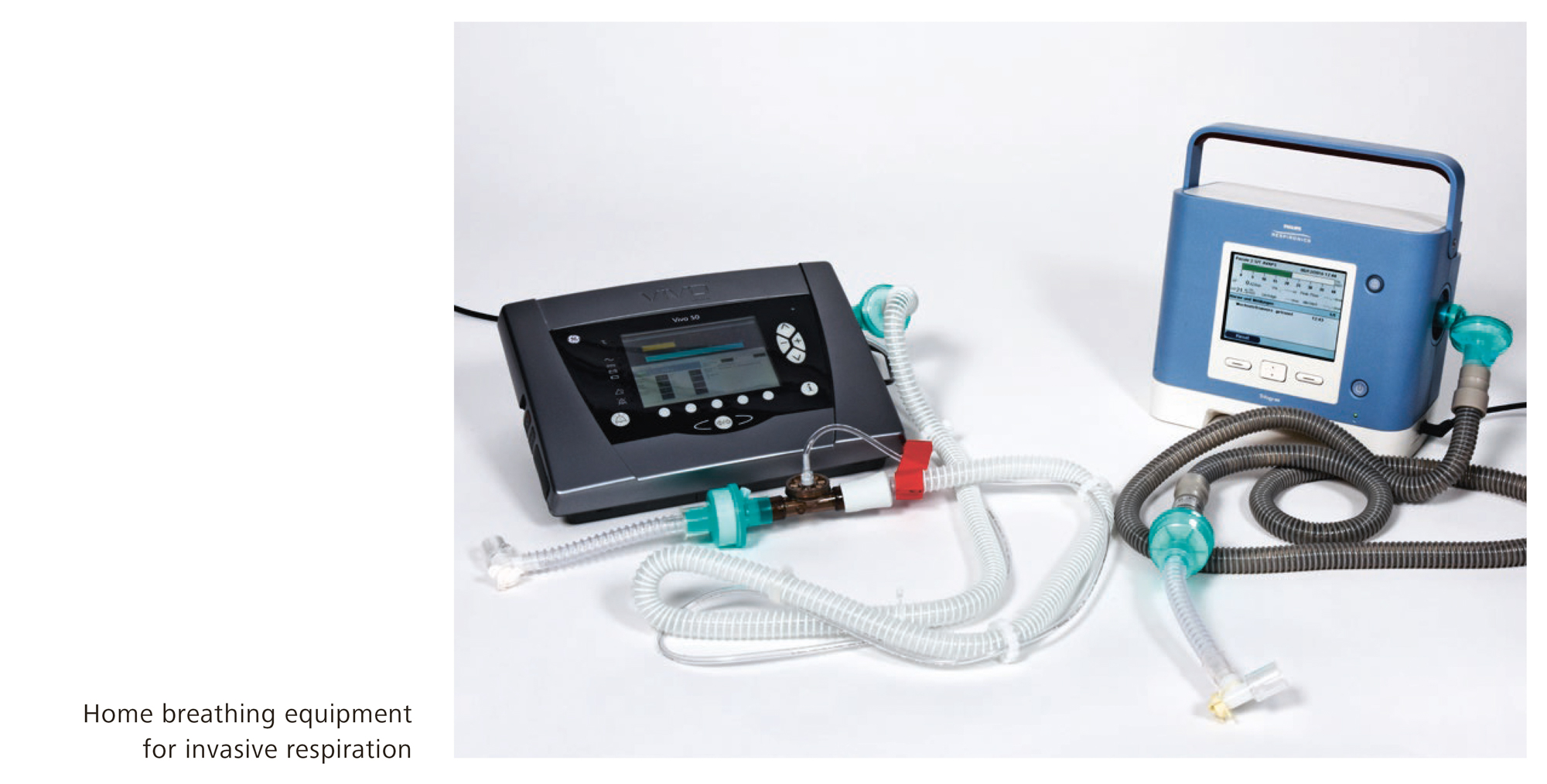 The natural respiratory impulse of the person affected is taken into consideration in this form. When they start to breathe, the breathing process is supported. If they experience lengthy interruptions in breathing, they undergo intermediate respiration under controlled conditions. 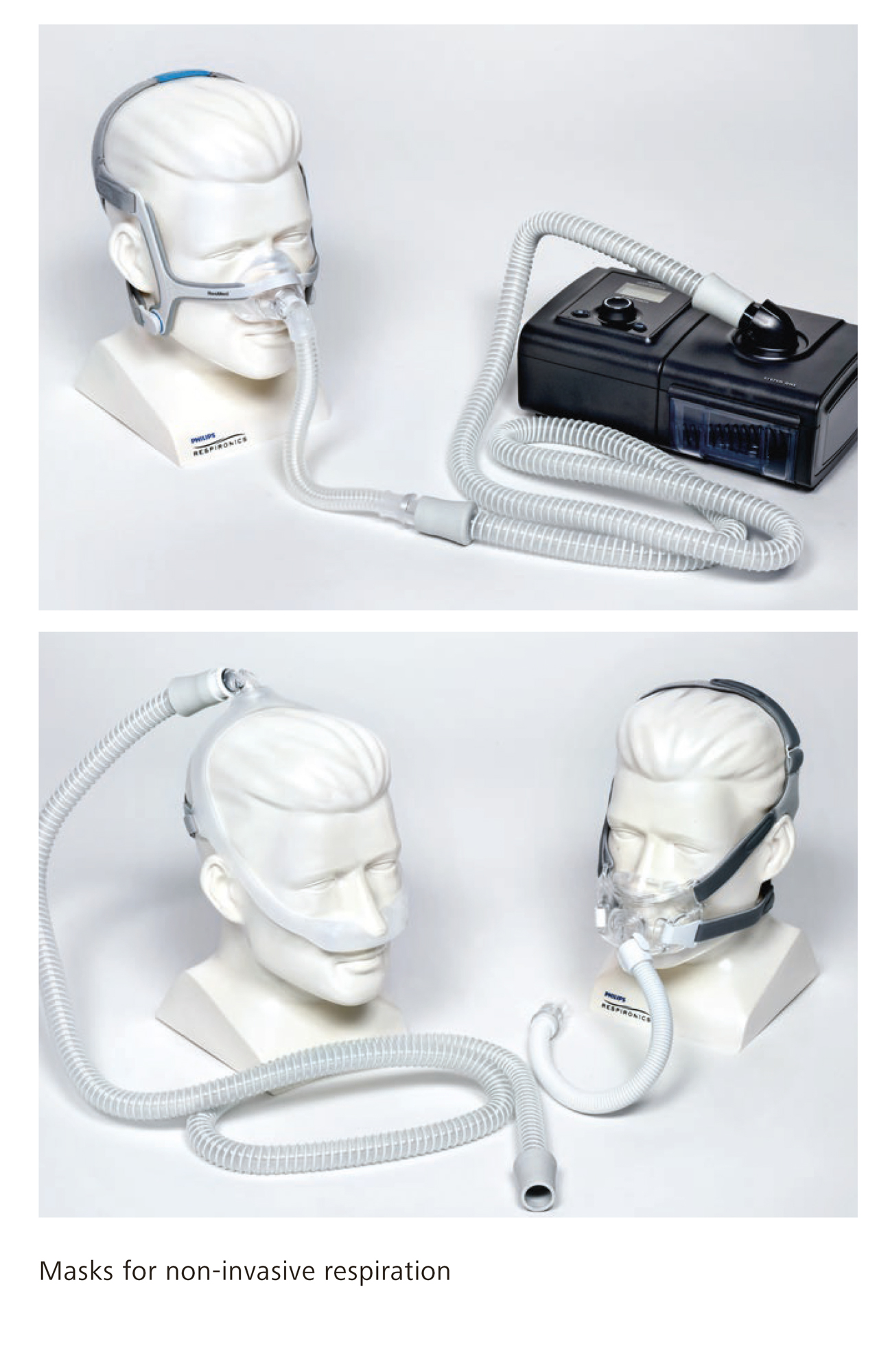 What does non-invasive respiration mean?

Non-invasive respiration means mechanical breathing support without endotracheal access, i.e. without the insertion of a tracheostomy tube in the windpipe. Respiration takes the form of excess pressure via a face mask, oronasal mask or nasal mask.

The adjustment and setting of non-invasive respiration is done by experienced personnel and require continuous monitoring at the start.

The person has to get used to wearing a respiration mask, and they must receive training in this.

When is non-invasive respiration applied?

The best known example of this is non-invasive respiration for people suffering from sleep apnoea at night; this means that they have lengthy breathing pauses while they are sleeping which reduce their supply of oxygen.

Another group for whom non-invasive respiration is suitable is people with a weakened diaphragm. Possible reasons for this include:

When is non-invasive respiration not suitable?

Non-invasive respiration is unsuitable if the person does not have any spontaneous breathing4 capability. Where people have consciousness disorders such as somnolence or coma, this technique is not applied due to the absence of protective reflexes (for instance, vomiting reflex). Application is also difficult in the case of people who experience agitation or who have a lack of understanding of the measure.

What possible complications may arise during non-invasive respiration?

Risk of aspiration5 and gastric flatulence

What are the advantages and disadvantages of non-invasive respiration?

Non-invasive respiration improves the quality of life for people who suffer from sleep apnoea. Tiredness during the day due to interrupted sleep at night caused by the lack of oxygen is reduced significantly.

One disadvantage is that it may be a nuisance having to wear the mask, especially when you turn over in bed at night. In addition, you always have to take the breathing device with you if you need it during the day.

Generally speaking, the objective of any breathing support should be that it is non-invasive in order to reduce the risk of complications.

What should I do if the breathing mask does not fit properly?

There are lots of different types and sizes of masks. It takes time to find the perfect mask for you. It is also possible the problems may only arise after a lengthy period of time. Contact specialist personnel, such as the RespiCare team. A new mask may have to be adapted.

Can I travel with the respiration device?

Yes, that is possible. Remember to find out whether you require an adaptor for the plug, e.g. for use while driving in a car.

5 Ingress of material into the airways

6 Inflammation of the conjunctiva