Structure of the spinal column and nervous system

The nervous system consists of a central, a peripheral and a vegetative part. The central nervous system consists of the brain and spinal cord. The nervous system is used for the acquisition, processing, storage and dissemination of information. Together with the hormone systems, it controls the activities of all the organ systems and is adapted and to meet environmental requirements. The spinal cord, as part of the central nervous system, plays a decisive part in the transmission of sensitive information to the brain and in the subsequent control of motor and autonomic functions.

Furthermore, the spinal cord itself is a nervous system that controls vital functions such as standing and walking, bladder, bowel and sexual functions, as well as breathing, temperature and circulation regulation.

The spinal cord is pushed up within the bony spinal column as a result of which the sacral region2 lies in the area of the thoracic spine. There is no spinal cord in the lumbar spine, only the long roots of the lumbar and sacral segments. 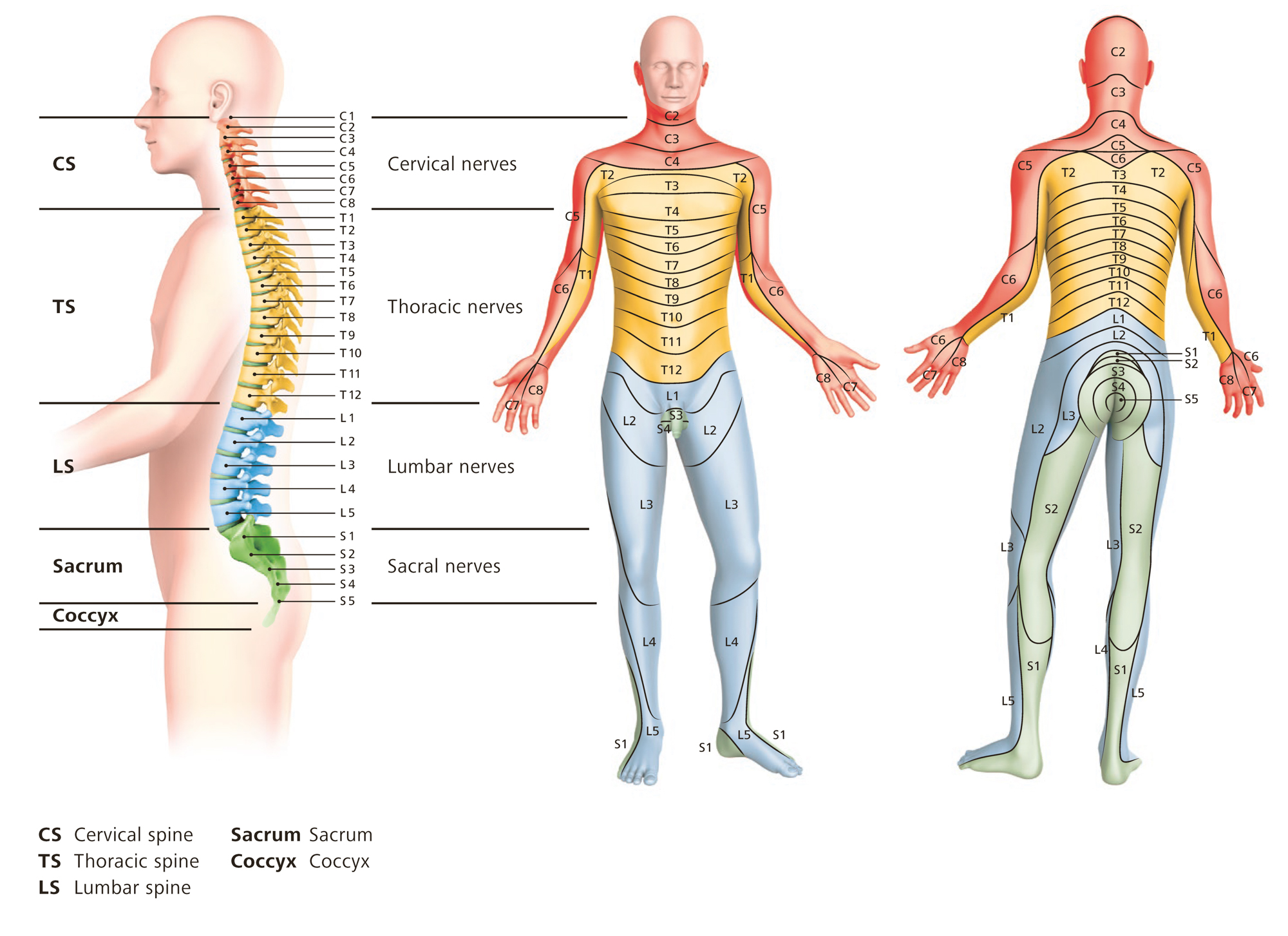 The spinal cord can be structured in various sections on the basis of the associated spinal nerves emerging from it. Each of these sections can be divided into segments. A segment is a section of spinal cord from which the fibres for a pair of spinal nerves emerge on the right and left. Each section of the spinal cord is independent to a certain extent, but they are closely linked to other parts of the central nervous system.

The structure of the spinal cord

The structure of the spinal cord is characterised by the butterfly-shaped, grey matter enclosing the central canal and the white matter surrounding it.

The grey matter primarily contains nerve cells, and the white matter contains the ascending and descending nerve fibres. The grey matter is the switching apparatus for the spinal cord. A distinction is to be made within the grey matter: 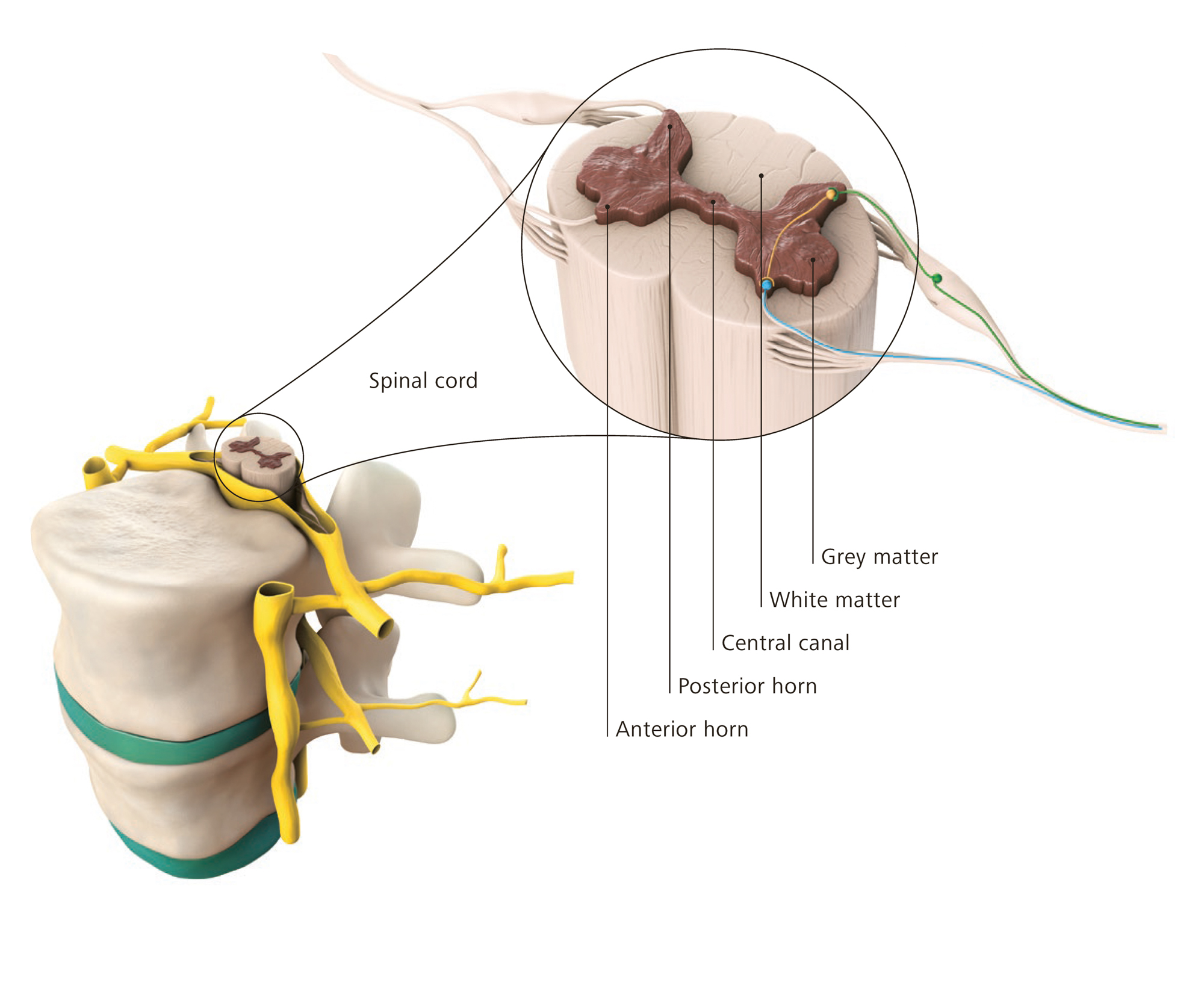 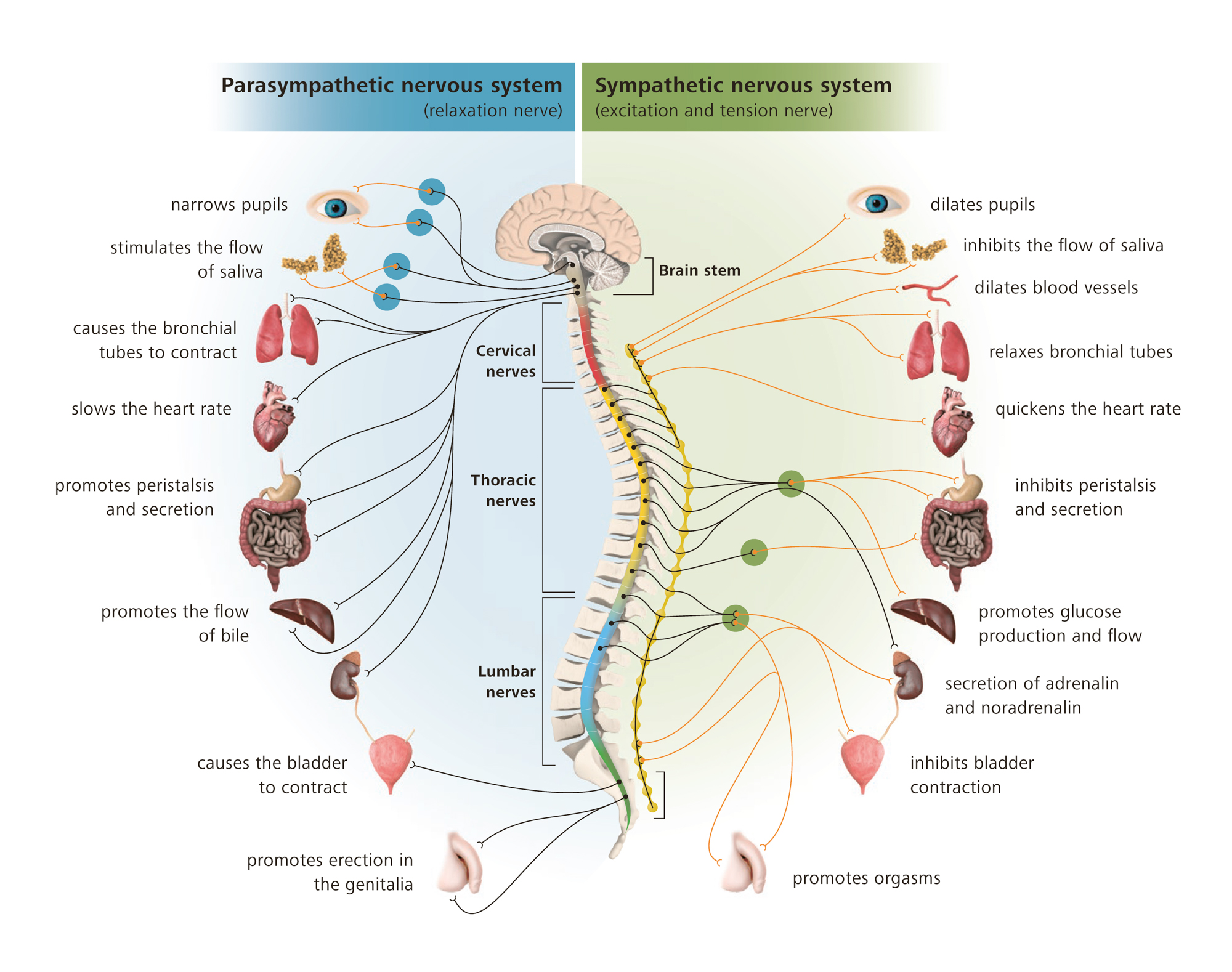 The term “autonomic” means that this part of the nervous system is not under the conscious control of an individual. The autonomic nervous system is responsible for vital functions because it controls or influences breathing, heart rate, circulation, bladder and bowel functions, metabolism, body temperature, important sexual functions, the kidneys and other organs or organ systems.

One talks about three parts: the sympathetic, parasympathetic and enteral systems. The latter regulates bowel motor responses. The sympathetic and parasympathetic nervous systems (vagus nerve und sacral parts S2 – S4) work antagonistically (against one another) in healthy people, although they are generally in a healthy balance. This balance is disrupted in people with spinal cord injuries; consequently, this imbalance may lead to many problems, some of them life-threatening.

2 lower-most part of the spinal cord