Wheelchair or handbike - which one is better for the shoulder?

The hands are gripping the handrim and propelling the wheels forward with pressure - day by day, year by year. This is the normal way many wheelchair users are usually moving around and half of them are suffering from pain caused by daily mobility. The causes are manifold and it is often unclear what exactly causes it. The research team of the group “Shoulder Health and Mobility" of Swiss Paraplegic Research (SPF) pursues the approach that the shoulder load during wheelchair propulsion is too high and therefore can cause injuries. In several studies scientists were examining whether the wheelchair or the handbike is better suited to minimize the shoulder load and what the optimal settings of the handbike are.

Five out of ten people with spinal cord injury (SCI) suffer from shoulder pain. The significance of this number becomes clear when compared with the general population where only two out of ten people report shoulder problems. In people who can walk, the biggest and strongest muscles and joints of the legs are responsible for mobility. In people with SCI, it is the shoulders that take care of it. It is therefore not surprising that shoulder pain is a common condition. It is often unclear what the exact reason for shoulder pain is. Often several factors come together: It is possible that the individual anatomy of the shoulder is favourable for shoulder injuries, that movements are not carried out optimally or that specific activities cause a load on the shoulder that is too high.

The repetitive propulsion of the wheelchair is often reported as one of the most important reasons for shoulder pain. The researchers therefore examined in a first study whether other means of transportation, such as the handbike, are better suited to cover longer distances. An individual adaptation is very important since the motion sequences can be optimized and the load can be minimized. Numerous studies on the adaptation of the wheelchair are already available; however, studies on the handbike are still scarce. The scientists therefore wanted to clarify in a second study how the handbike should be set up to keep the shoulder load at a minimum.

How can the shoulder load be measured?

All the results were entered into a model which is used to calculate the force in the shoulder joint and in the individual muscles. This is currently the most accurate method to determine the load on the joints. 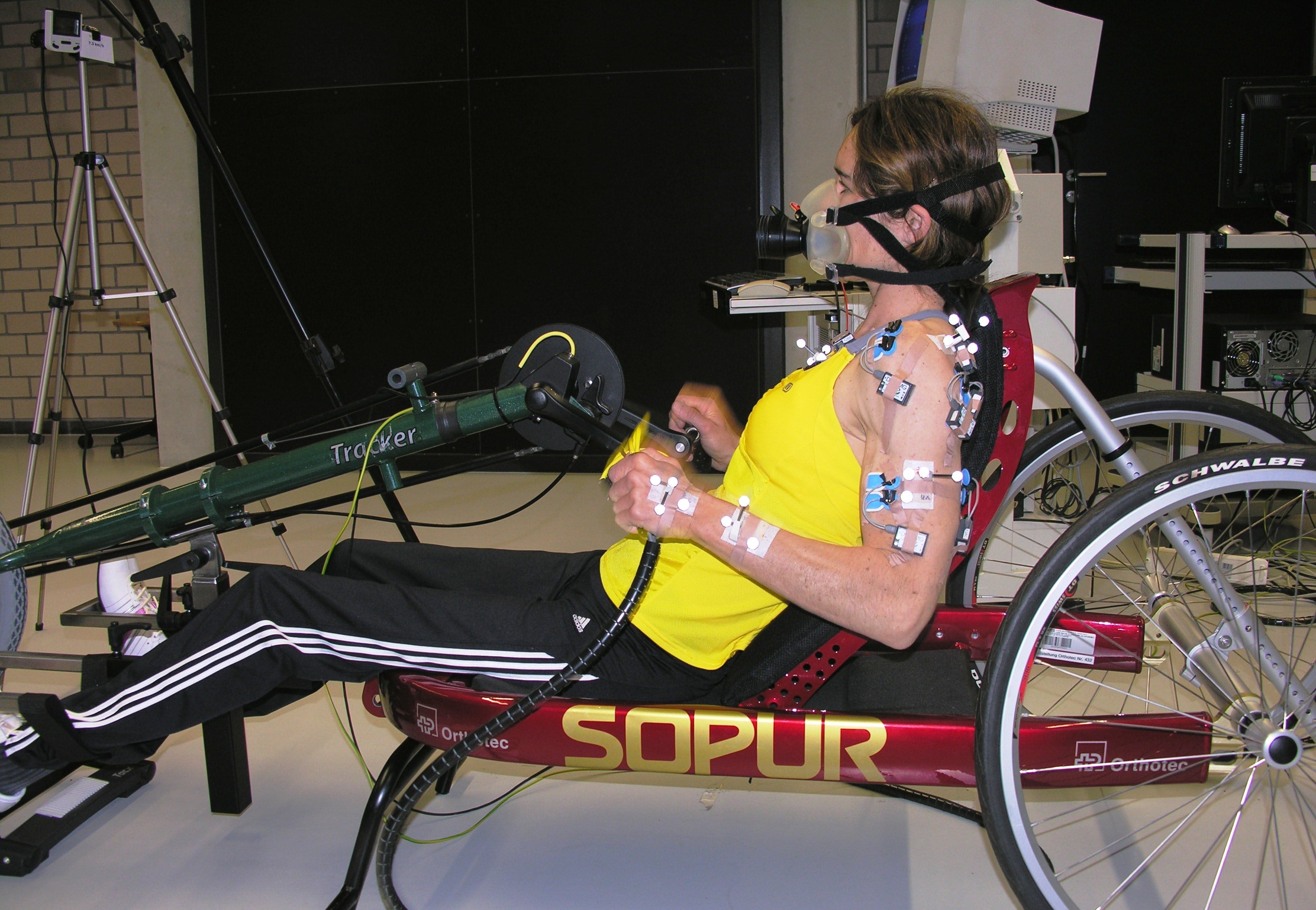 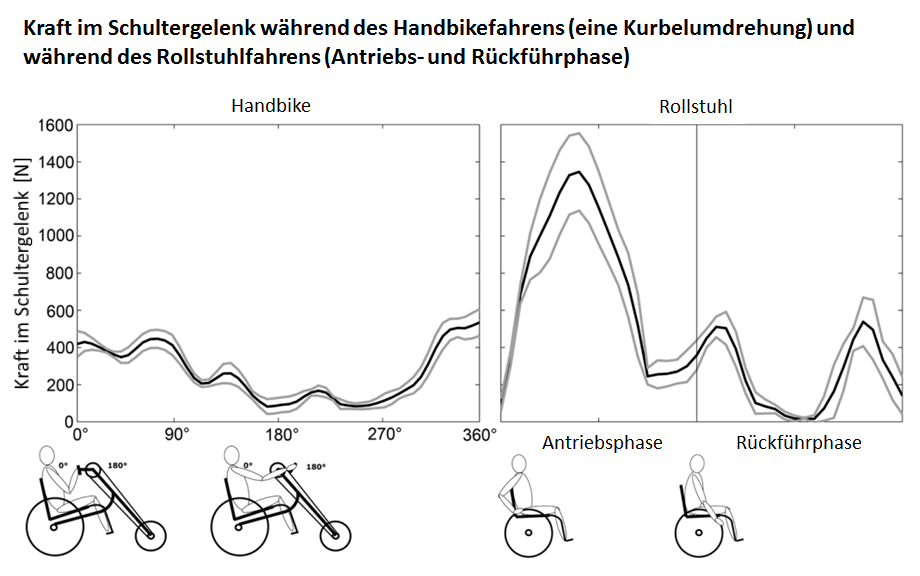 Force on shoulder joint at a power of 55 watt

Especially the muscle of the rotator cuffs, which stabilise the shoulder joint, are afflicted more heavily. If the wheelchair is propelled for longer periods, the risk of over-exertion of these muscles is higher which may lower their ability to protect the shoulder joint optimally and make it prone to injury and pain.

The study confirmed the results of other research groups: The handbike is more efficient than the wheelchair, e.g., the same performance requires less energy.

Optimal setting of the handcycle

The settings of the handbike have been examined in previous studies. The goal was not minimizing the shoulder load but maximizing the performance. To reach a possibly high performance, the results of the studies suggest the following: The crank should be positioned below the shoulder, the optimal crank length is 18 cm and the handles should be positioned shoulder-width apart and with an inclination of 30° (hands inclined toward the inside 30°).

The topic of the studies presented here was the shoulder load, therefore the study participants of the second study went at the same performance but with different settings of the recumbent handbike. Compared to the clip-on handbike, the recumbent handbike is a separate sports device where the user is lying and closer to the ground. The angle of the backrest (15°, 30°, 45° and 60°) as well as height and distance of the crank position were varied.

The results of the study clearly show that an optimal position of the back rest is upright (angle of the back rest = 60°). With this setting, not only the force on the shoulder joint but also the load on the shoulder muscles (rotator cuffs) is the lowest. The lower the back rest is set, the higher is the shoulder load. Since the test was carried out on an ergometer, the air resistance could not be taken into consideration. If sitting in an upright position, this resistance increases and therefore limits the speed, which is not ideal especially for competition athletes. For recreational athletes, who are not focusing on the speed, it is recommended sitting upright if possible.

The results of the crank height show that there is no difference between whether the crank axes is placed below, above or at shoulder level. The crank distance, however, is essential: If the crank is positioned closer, the shoulder load increases. The crank should therefore be set in a way that the elbow is only slightly angled (15°) but at no point fully stretched.

To minimise an overload of the shoulder, the hand bike should be used for longer distances and not the wheelchair. It should be used in an upright sitting position and with a distanced crank position.