The wish for regaining their hand function ranks first for most tetraplegics. By performing a tendon transfer, it is possible to restore certain finger functions. The ability to flex the fingers, for example, can be recovered through a transfer of the tendon of the extensor carpi radialis longus (muscle that stretches the wrist) to the tendon of the flexor digitorum profundus (muscle that flexes index to little finger).

A previous study has shown that when restoring the finger flexion also the so-called intrinsic muscles should be included to regain an optimal and functional grasping movement (see article in the Research Corner "Intrinsic hand muscle function, part 1: creating a functional grasp"). The small muscles are located in the palm of the hand and are attached laterally on each of the four fingers (index to little finger). When the intrinsic muscles are active, the distance between fingertip and palm is bigger while doing the grasping movement. Therefore also larger objects can be clasped.

There are two different operation procedures to restore the functioning of these muscles surgically: the Zancolli lasso procedure and the House procedure. The aim of this study was to find out which of the two procedures enables a more functional and natural grasping movement.

In order to simulate the grasping movement, the tendons of the finger flexor muscles were then connected to a motor. The motor was set in a way that the stretched fingers of the open hand contracted to form a fist. The scientists recorded a video of the finger movement. From the video the angles of the individual finger joints, the sequence of the joint movement and the distance between fingertip and palm during the movement was calculated. The data from the hands with the two different surgical methods was then compared.

Both surgical methods showed as a result that the distance between fingertip and palm during the grasping movement was bigger than without a surgery. The reasons for this improvement, however, were different.

With the Zancolli lasso procedure (see figure 1) the tendons of the finger flexor muscles on the surface are shortened so that the fingers are always slightly flexed in the metacarpophalangeal joint (joint that connects the fingers to the palm). This changed the initial position of the grasping movement for the study and therefore the distance between fingertip and palm during the gripping. 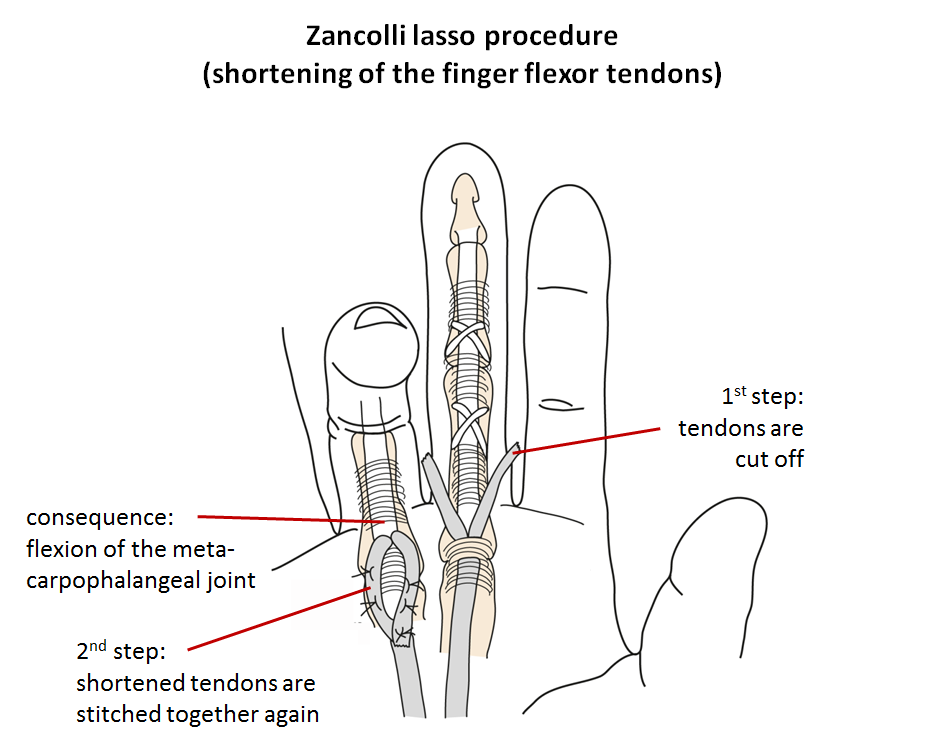 The House procedure (see figure 2) uses a tendon graft, i.e. a finger tendon from a paralyzed finger flexor muscle of the same body is implanted. With the tendon graft the index finger joint in the middle is connected to the one of the middle finger. The same is done with a second tendon graft at the proximal interphalangeal joints of the ring and the little finger. 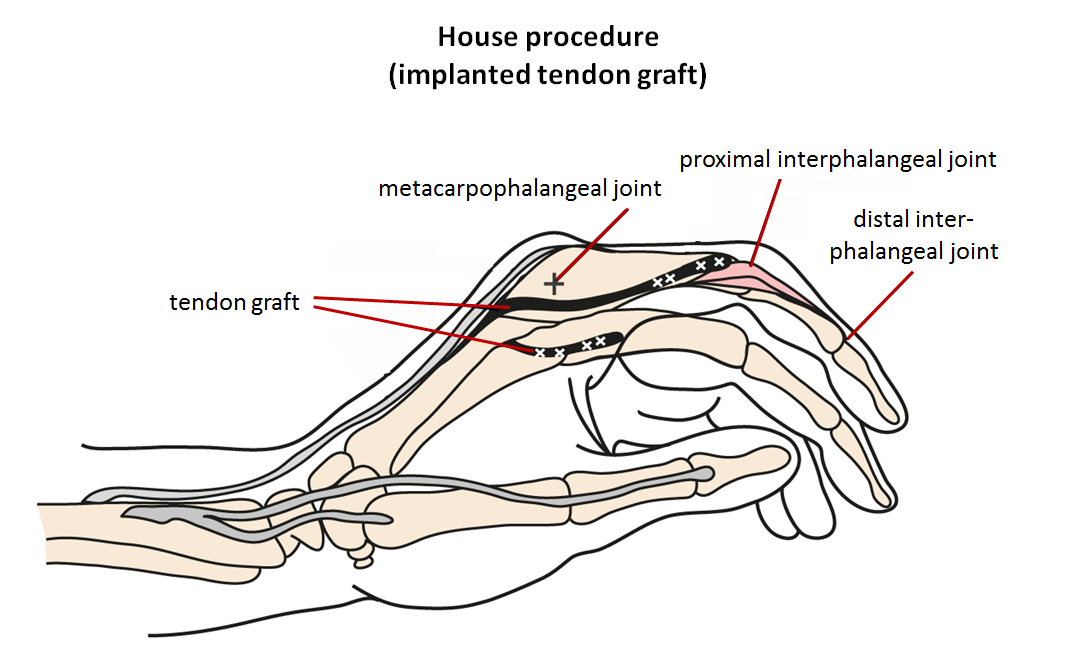 The results of this study show that both surgical procedures do improve the functioning of gripping: by restoring the function of the intrinsic muscles, the distance between fingertip and palm is enlarged during the grasping movement. This allows for bigger objects to be grasped.

Comparing the two surgical procedures shows, however, that only the House procedure can restore the "natural" movement pattern which corresponds to a hand movement with active intrinsic muscles. When restoring the grasping movement surgically, the House procedure is therefore preferable to the Zancolli lasso procedure.

The study was carried out and financed by Swiss Paraplegic Research in Nottwil, Switzerland, and the Muscle Physiology Laboratory of the University of California in San Diego (USA).