People with a tetraplegia often report that regaining hand function would be most important when it comes to body functions that were lost due to the paralysis. For many people it is possible to regain certain finger functions with the help of a tendon transfer. The finger flexion for example can be recovered through a transfer of the tendon of the extensor carpi radialis longus (muscle that stretches the wrist) to the tendon of the flexor digitorum profundus (muscle that flexes index to little finger).
However, if only the flexion of the finger is recovered, the finger can only curl up. This means that the distance between the fingertips and the palm is very small during the grasping movement and therefore it is impossible to grasp larger objects. Therefore, it is important to increase the distance between the fingertip and the palm to obtain an optimal functional grasping movement. If the hand function is intact, the intrinsic hand muscles execute the fine coordination of the finger movements. These small muscles are situated in the palm of the hand and are attached to the sides of the four fingers (index to little finger). It was the goal of this study to find out, which role the intrinsic hand muscles play with regard to a functional grasping movement.

Five hands were examined that were provided by deceased people. The tendons of the finger flexors were attached to a motor to simulate the grasping movement. The motor was adjusted so that the fingers of the open hand (stretched fingers) curled up into a fist. To simulate the different activity levels of the intrinsic hand muscles, five weights were attached to the intrinsic muscles (0 g = passive muscles, 125 g, 250 g, 375 g, and 500 g = maximal weight with which the fingers remain extended at the start of the movement).
The finger movement was video-taped. With that, the angles of each of the finger joints, the sequence of the joint movement and the distance between fingertip and palm were calculated. Then these measured values were compared between the activity levels of the intrinsic muscles. 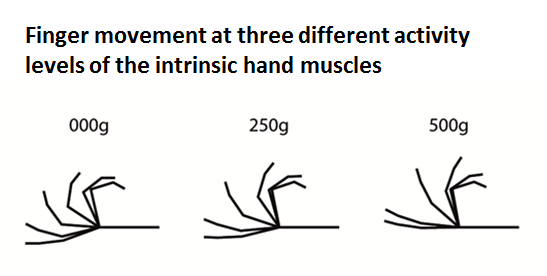 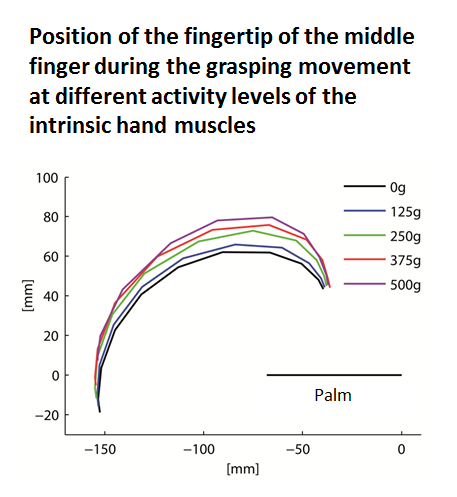 Figure 2: position of the fingertip of the middle finger during the grasping movement

The results of this study showed that the distance between the fingertips and the palm increases through the additional activation of the intrinsic finger muscles. The difference of two centimetres is quite big with regard to the grasping movement and this can be a decisive factor, if a person can grasp an object by himself or needs additional help. With active intrinsic muscles it is possible to grasp e.g. a standard soft drink can, whereas with passive muscles it is not possible. Consequently, the grasping movement was more functional with the additional intrinsic muscles.
This means, with regard to tendon transfers, that it is recommended to include also the intrinsic muscles when recovering the finger flexion to achieve an optimal functional grasping movement.

The study was funded and conducted by Swiss Paraplegic Research and the Muscle Physiology Laboratory of the University of California in San Diego (USA).