The conceptualization of the Reagiro wheelchair

What does a designer do?

“I google myself and my project every two months because I want to know where it’s being published.”

I’m not sure if every designer would google themselves regularly but that’s how the Community got to meet Reto Togni (@retogni). He is the designer of the Reagiro, a manual wheelchair with a backrest steering system allowing users to navigate with only one hand.

Early this year our moderator Julia shared her discovery of the Reagiro on the Community blog. Three months later, Reto read the blog post after a Google search of himself, and even signed up as a member of the Community to give us his comments. 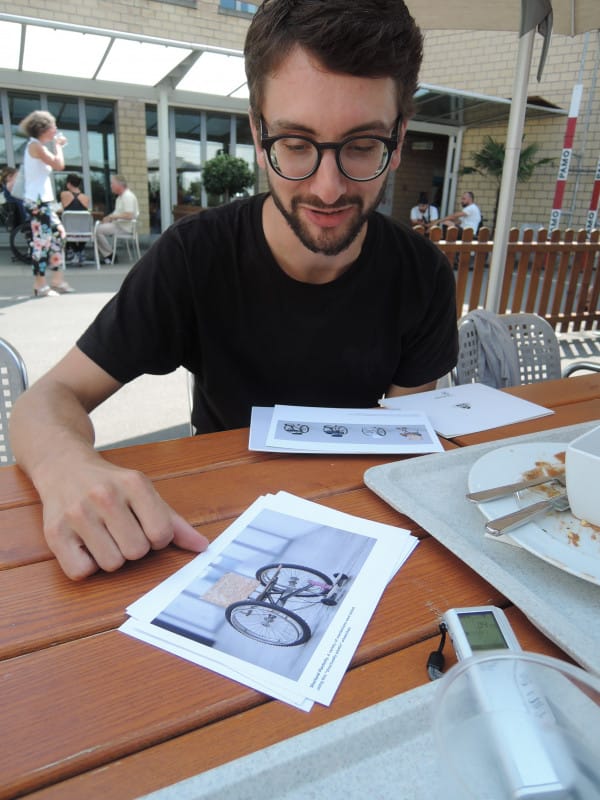 Reto shared more about the Reagiro at Swiss Paraplegic Centre in Nottwil.

As a follow-up, the Community team has invited Reto for a visit in August at the Swiss Paraplegic Centre in Nottwil, where we discussed the Reagiro further as well as disability and design.

Why designing a wheelchair?

Last year, Reto graduated with a double Master’s degree (MSc/MA) in innovation design engineering. During the second year of his Master’s studies, he, like the other students, had to run an individual design project. As a result, Reto designed the Reagiro backrest steering manual wheelchair. But why, of all things, did Reto design a wheelchair?

To gather more ideas, Reto started talking to people about disability and technology – not just the technical manners of assistive devices but also their emotional values to people. These emotional values, which are often ignored by engineers, are considered important by Reto and have become inspirations for the Reagiro.

Reto recalled one of the conversations with his good friend who is a wheelchair user. His friend had observed how smoothly skateboarders can move even over uneven terrain. He wondered how it would be to make a wheelchair that works like a skateboard. This comment was one of the clearest Reto got on what users exactly want with their assistive device. In addition, various comments about a joyful ride or leaning back have contributed to the conceptualization of the Reagiro.

Reto’s design project lasted six months. Often he worked more than 12 hours per day and six to seven days per week. He recalled the first three months as the most exhausting and depressing. One challenge was to think of a workable engineering solution for his wheelchair so that users could operate it with one hand free. The other challenge was to cultivate a positive relationship between his product and the users.

During the visit, Reto shared with us constantly his thoughts and ideas on wheelchairs and the Reagiro. One can totally feel his passion and determination to create a user-centered device.

Reto also talked about the multiple dimensions of wheelchairs. For the social dimension, he mentioned wheelchair is rather commonly used as a general icon of “can’t do something”, for example, in disabled parking slots. For the medical dimension, wheelchair is an assistive device which goes through many tests of functionality by clinical and engineering professionals. Finally, as wheelchairs are integral parts of many users’ lives and, furthermore, are often tailor-made, they can become highly personal objects. 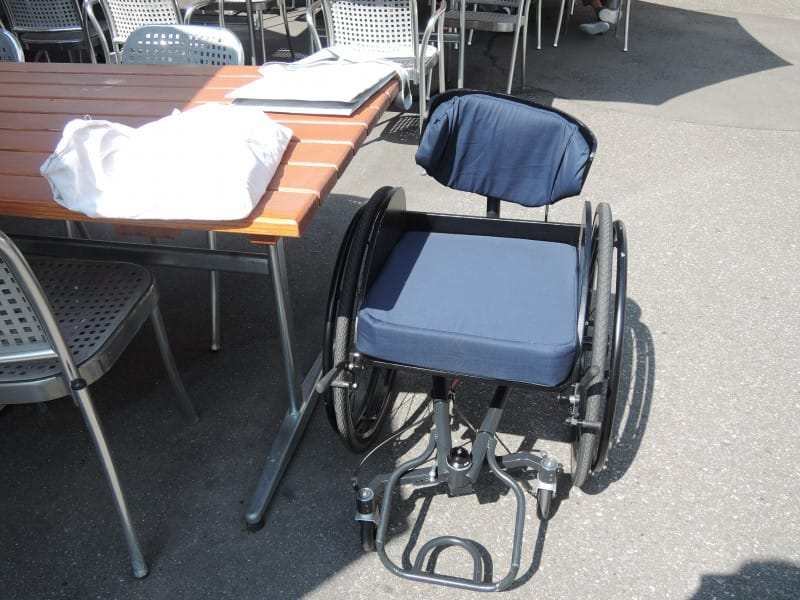 Prototype of the Reagiro: result of a six-month project.

About being a designer, Reto shared that it is important not to be super egoistic. He pointed out that there are many designers creating something mostly for themselves, and that this circumstance is almost natural for designers. However, it might not be the best way of designing.

“For me, a design project becomes most interesting when it is about a specific social phenomenon, rather than some particular persons’ taste.”

The prototype of the Reagiro

After numerous discussions and informal test rides with wheelchair users, Reto designed and built the prototype of the Reagiro with multi-components including 3D-prints. This way he can customize the wheelchair to a high degree with a low manufacturing cost. 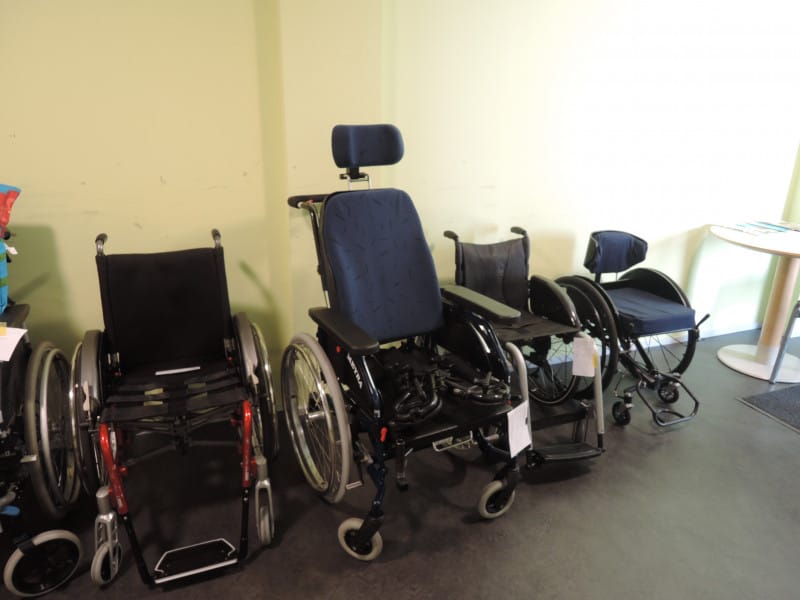 Have you spotted the Reagiro?

Reto brought along the prototype to his visit in Nottwil. On our way to a tour at Orthotec, Johannes and I had a ride with it. At Orthotec, Markus Anderhub, our Orthotec tour guide with incomplete paraplegia (L2-3), also gave it a try. Here’s a sneak peek of our experiences. 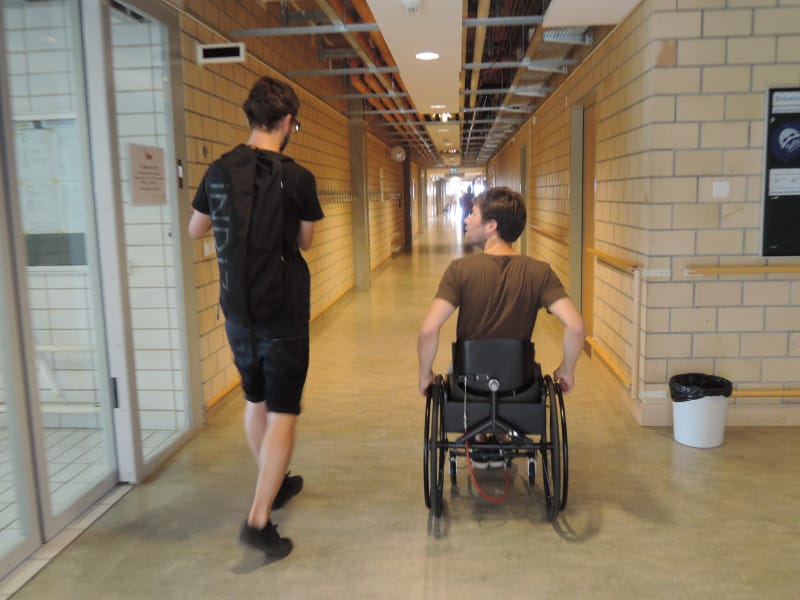 Reto (left) guided Johannes during his test ride on the Reagiro. 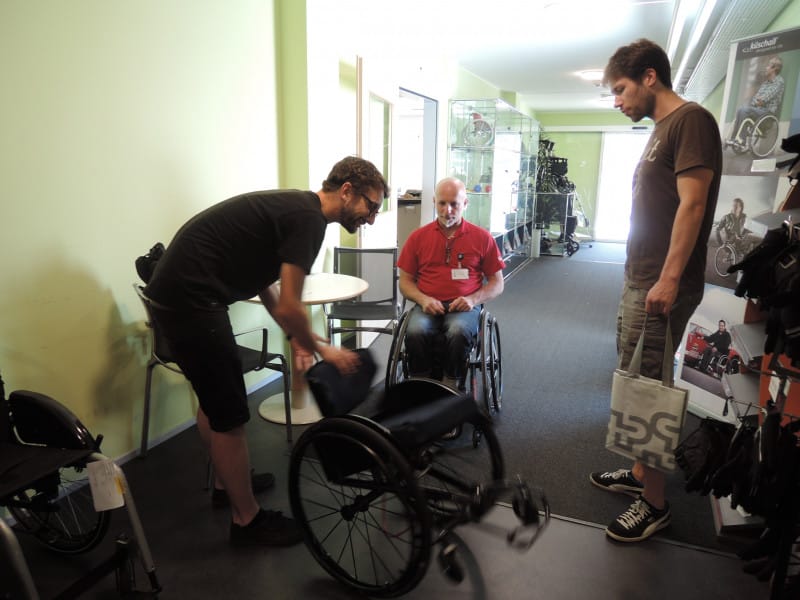 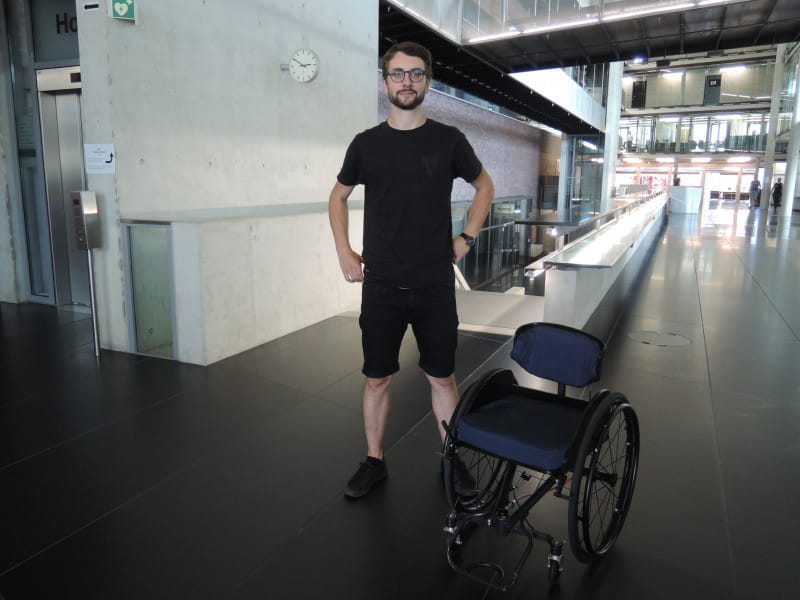 What’s next with Reto and his Reagiro project? Read it in my next blog post.

How does it feel to ride on the Reagiro? What’s new with the Reagiro project? Find out more in my next blog post where we continue the visit and discuss more with Reto.

Which assistive device do you wish to have or would you like to see on the market in future? Share with us!