This post is about Muniba Mazari, a lady who is wheelchair-bound since 2007. She  shared her story in a TED talk about a life-changing car accident in her home country, Pakistan. She spoke candidly about her experience and how out of all her injuries, the spinal cord injury was the most devastating.

Right at the beginning of her talk, Muniba shared details of the car accident that changed her life and personality completely. She recalled sustaining multiple serious injuries, including three completely crushed vertebrae in her backbone.

The way to the hospital was another tragedy. Failing to find an ambulance, Muniba could only stay at the back of a jeep all the way to the hospital even though she was seriously injured. Unfortunately, she needed to be rushed to another hospital as the first one they went to had no first aids. At the second hospital, she got sent away again because they did not have the equipment to operate on her. They even thought she had a low chance to survive and therefore didn’t feel the urge to help further.

Then, they went to the third hospital in Karachi and luckily they accepted Muniba. There she received three major and two minor surgeries, where the doctors had to put a lot of metal in her arm and backbone in order to fix her. For that reason, she got the nickname “Iron Lady of Pakistan” and she feels pretty much like that now.

Muniba in a hospital bed after surgery. (Source: https://www.quora.com/Who-is-Muniba-Mazari)

After being told that she can never walk again and bear children, Muniba initially felt hopeless. However, she explained how she soon changed perspective on her situation. Holding a bachelor’s in fine arts, Muniba turned to painting. One of the first things she did was to brighten up the white surroundings of her hospital room.

Muniba confirmed that the best decision she made in her entire life was the painting she made in the hospital with a deformed hand, and how it added colors to her colorless life.

After spending two and a half months in hospital, Muniba moved to Islamabad where she continued to be bedridden. She used the adversity she faced to explore her artistic nature. She believes that it was art what kept her alive during her journey of being bedridden for a total of two and a half years.

Muniba talked about the moment she sat on the wheelchair for the first time, and how it made her feel like a completely different person.

She recalled looking at herself, in her wheelchair, in the mirror. She said to herself that it’s pointless to wait for a miracle to walk again, or a stem-cell treatment which she cannot afford. Instead of sitting in the corner of the room crying, Muniba decided that she needed to accept herself the way she was, and the sooner the better. 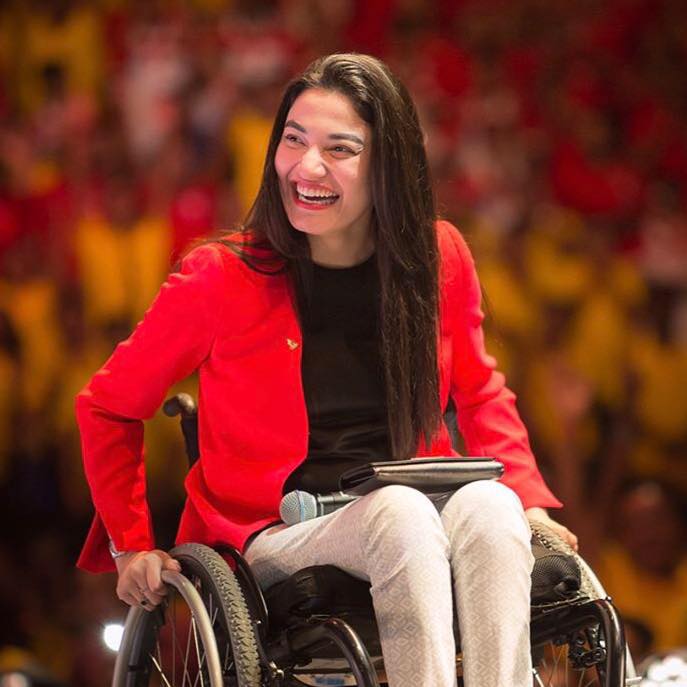 Accepting herself the way she is has helped Muniba live a happier life. (Source: Facebook @Muniba.Canvas)

Muniba went on to build a successful career as a content writer and artist, but she didn’t feel fulfilled. She wanted to do something big for the people of Pakistan.

One day she came across a polio vaccine campaign that depicted a child in a wheelchair as miserable and in need of mercy. Muniba was shaken by this portrayal of people with disabilities in the media and decided to do something about it.

Since then, Muniba is a passionate advocate for those using a wheelchair. She pushes back against people with disabilities being objectified as a symbol of misery or mercy. She campaigns for changing people’s perception about life on a wheelchair. Muniba showed them that it’s still possible to face the world with a big smile and be happy about oneself even being on a wheelchair. She added, 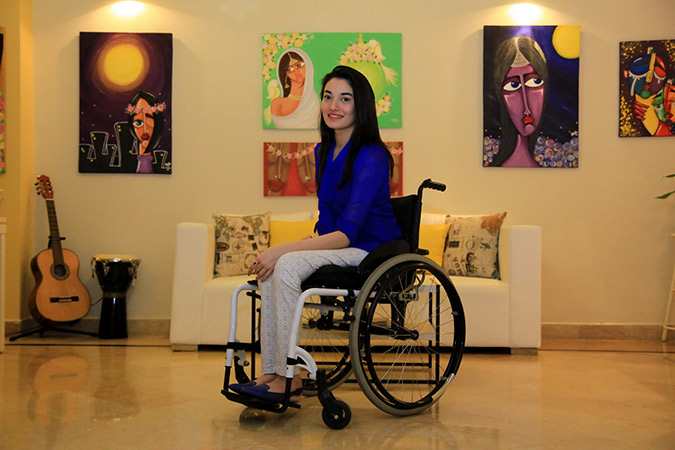 Muniba in her home. (Source: http://www.goodtimes.com.pk/gt-interview-muniba-mazari/)

As Pakistan’s first wheelchair-bound model, Muniba did a modeling campaign for the renowned hairdressing brand Toni & Guy. She is also the brand ambassador for The Body Shop Pakistan, a cosmetics company.

In 2015, Muniba was chosen as one of Pond’s 100 Miracle Women, which is part of the Pond’s Miracle Journey initiative to highlight strong Pakistani women. This recognition further motivated Muniba to break down barriers for wheelchair users in her home country.

Muniba is now a motivational speaker and activist. In her TED talk, she used the word “wheelchair” many times because she considers it empowering. Muniba also talked about some issues she faces as a wheelchair user, but she does not let them hold her back. She believes that her wheelchair has given her the opportunity to explore what she has in herself and never knew it. She said, 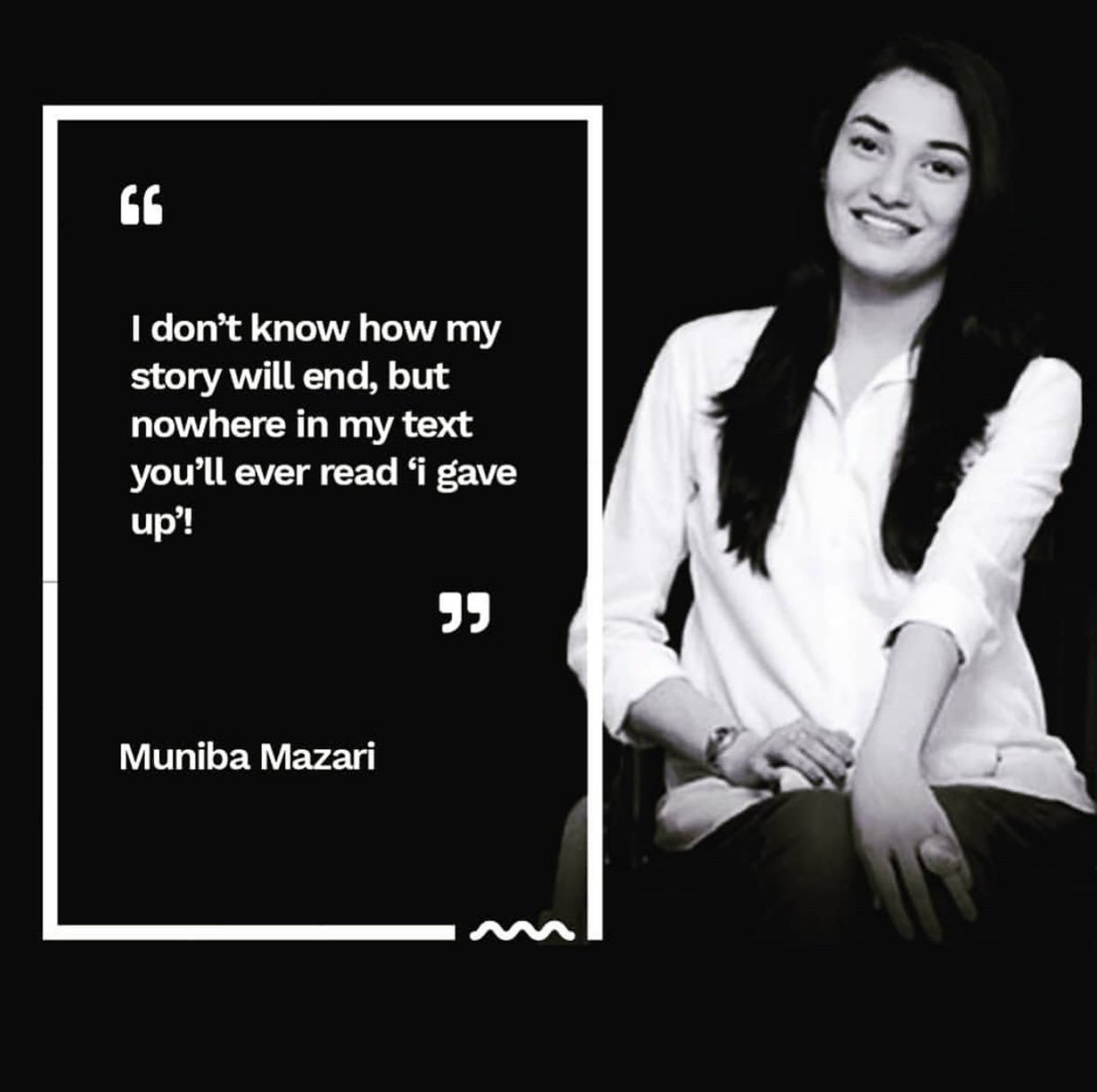 What do you think about Muniba’s story and her views on being in a wheelchair? What are your strategies to turn adversities into opportunities?