Resuming work after spinal cord injury (SCI) is a struggle for many. Often people with SCI have difficulties to keep their pre-injury jobs because of their change of physical capabilities. The lack of social support and the misconceptions of employers on hiring people with disabilities make it even more challenging for them to resume their careers.

However, as a famous saying suggests, "Where there's a will, there's a way."

Here we gather stories of four wheelchair chefs and see how they overcome the challenges: not only to go back to work but also find their new purposes in life.

Reach for the Michelin stars

Receiving a Michelin Star is the dream of many professional chefs. Haikal Johari is one of them. The Singaporean has worked as executive chef for a restaurant group in Bangkok, Thailand, for 13 years. However, a motorbike accident in 2015 has left him paralyzed from the neck down.

Despite being diagnosed with just a three percent chance of moving his body again, Haikal's passion for cooking has never faded. He was also fortunate to be offered a new job at the Spanish restaurant "Alma" in Singapore when he was still in rehabilitation.

Haikal's wife once told him,

"Don't worry, your brains are still intact, you can still do things."

With her words of encouragement and support in daily life, Haikal accepted the offer and started working on the menu for the restaurant before he was discharged from the rehabilitation center.

Soon he also proved that one's ability to succeed is not determined by diagnoses or wheelchairs: He was part of the team to help the restaurant in earning its first Michelin star during its launch in 2016. Under his leadership, the restaurant retains its one star Michelin status until now.

"All this (rehabilitation) progress was to me, like getting a Michelin Star." Haikal shares the story of his recovery and his passion for cooking: his driving force to succeed again as a chef.

In March this year, Haikal's restaurant, like many others, was hit hard by the COVID-19 pandemic. However, he saw this low season as an opportunity to give back to the society. He and his team have joined forces with 19 other Michelin-recommended restaurants in Singapore to deliver 2000 free meals to those in need via the Food Bank Singapore. During the pandemic, his restaurant also donated free lunch boxes twice a week to support the staff at the National University Hospital in Singapore, where he once had his rehabilitation. Haikal said,

"I believe that after every hardship, there is victory – that's our light at the end of the tunnel."

A mix of helplessness and frustration still upsets Haikal sometimes, but he is overall happy with his life after SCI and has learnt to be more patient and expressive in all aspects. Crediting his achievements to good teamwork, he always encourages his team not to give up.

Like many people, Aleem Syed thought his career as a chef was over after his accident in 2008 leaving him paralyzed from the waist down. Now, the Toronto chef continues to run Canada's first wheelchair accessible food truck, which he launched in 2014.

The turning point came when Pascal Ribreau, another chef in Toronto, visited Aleem at the hospital and offered to show him his restaurant and how he works as a paralyzed chef. Being Indian and Muslim, Aleem eventually started his own catering business serving Halal dishes in a food truck. 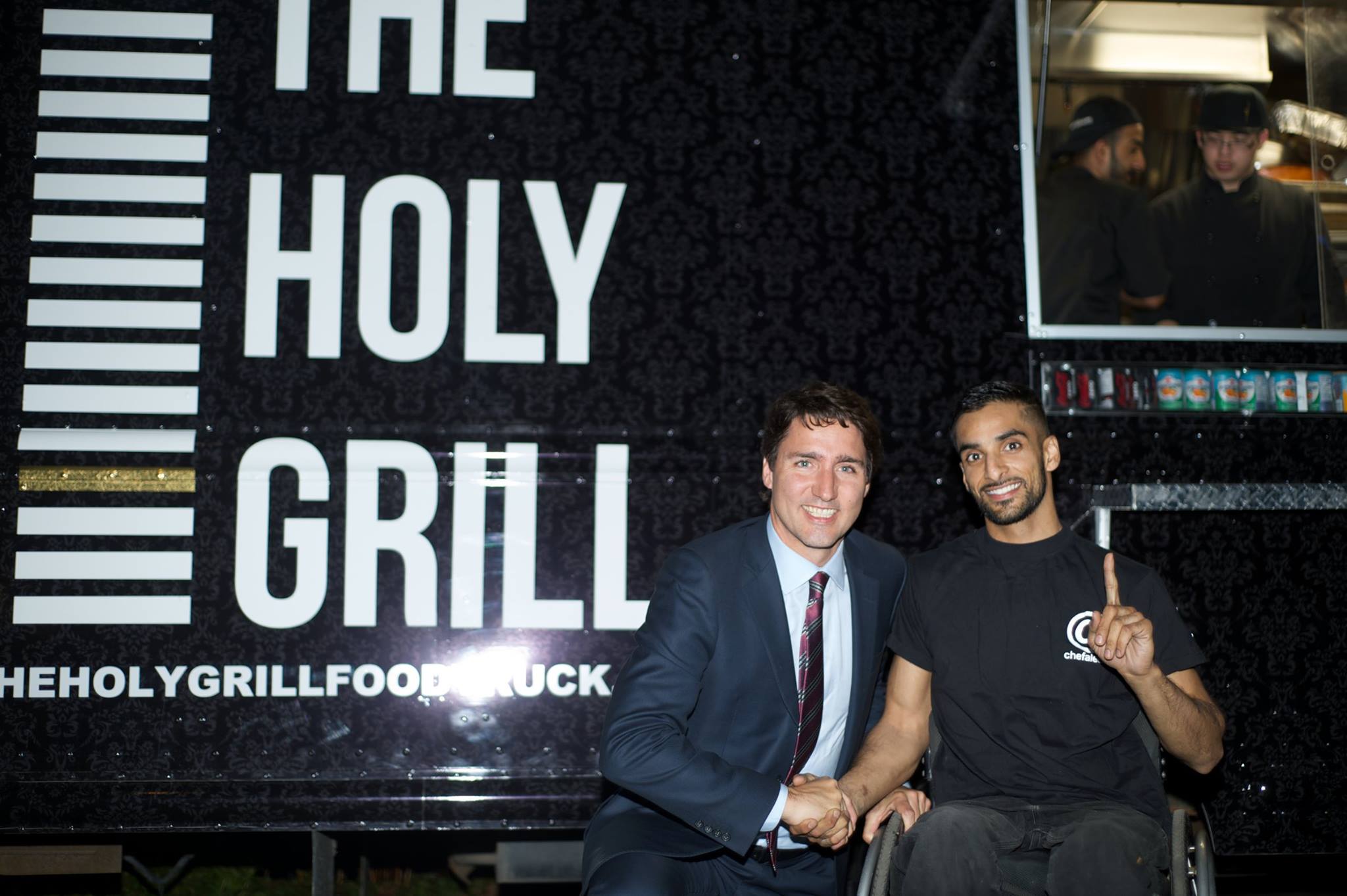 Justin Trudeau (left), who led the Liberal Party at the Canadian federal election, visited Aleem and "The Holy Grill" back in 2015. (Source: Facebook@kravebistrotoronto)

Aleem's 18x6 feet (approx. 10 square metres) food truck is equipped with an electronic ramp, which he can use to get in the truck independently. The truck is also built in a manner that he and his co-workers, between three and six people, can work together easily at the same time.

Many, including Aleem's doctors, think the food truck is a miracle. That's also how it got its name "The Holy Grill". Now Aleem travels with the truck through the country and food festivals, offering halal burgers, tacos, grilled skewers and poutine: a Canadian dish made with chips, cheese and gravy.

Aleem said his wheelchair is much more than wheels and metal, as it allows him to live life. He told the Canadian television network Global News in an interview,

"I don't let this chair turn into a 'disability factor'."

Podcast for chefs with different passions and limitations

The American chef Eli Kulp survived the 2015 Philadelphia train derailment with a major spinal cord injury, leaving him in a power wheelchair with limited use of his arms. He recalls how depressed he was after spending six months at the hospital. Constantly grieving for his injury, he could not imagine how he could ever be happy again. He was so frustrated even he knew everybody was trying to be helpful, as nobody but him could understand his situation and capabilities the best.

"Depression will make you feel like you have weights on your legs, so you can't move."

Luckily, Eli overcame the darkest time slightly a year after the accident, and found the confidence and energy to reorganize his life as a restaurateur. That involves lowering his expectations in order to reduce his frustration due to things he cannot handle physically. In April this year, he started to help others facing similar challenges and frustrations by launching the CHEF Radio Podcast. 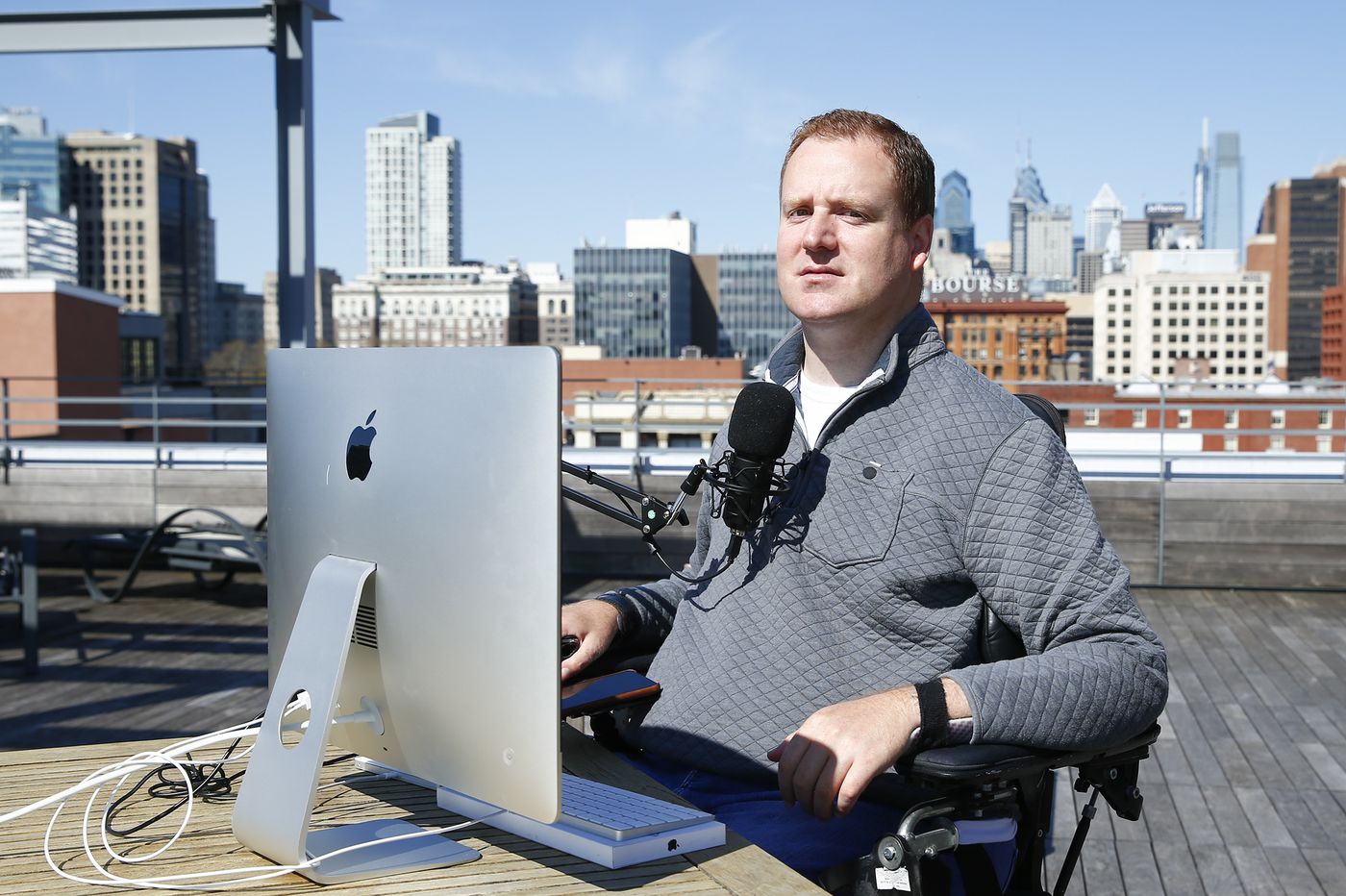 Chef Eli Kulp records his CHEF Radio Podcast on the rooftop of his home. (Source: inquirer.com)

CHEF stands for cooking, hospitality, environment and food. During the podcast, Eli interviews chefs of different backgrounds and limitations to discuss issues on accessibility, sustainability and social justice in food and restaurant industry.

For example, in one episode he discussed gender biases and systematic inequality with Chef Jen Carroll. He also invited various guests from the industry to discuss how they can build a more equitable business and bring more positive impacts to the society while rebuilding livelihoods during and after the COVID-19 pandemic.

On the podcast, Eli confessed that he still feels frustrated every now and then, but being resourceful has helped him through difficult times:

Set a goal but not a time limit

A motorcycle crash in 2015 left Michael Thor a quadriplegic. Like many, his doctor told him that "everyone heals differently" and his prognosis to heal was grim. However, Michael and his family are not giving up.

A neurosurgeon explained in an interview that humans use only certain instead of all pathways in the spinal cord. Sometimes recovery after SCI occurs with the unused pathways being developed.

In order to increase Michael's chance of recovery, Michael's mother opened a local franchise of a non-profit physical therapy chain in Atlanta, U.S., in 2018. At the therapy center, Michael and other people with SCI can maintain a continued therapy, which is usually costly but crucial to their recovery.

Michael and his wife talk in an interview about his rehabilitation and plans to walk again.

Through multiple physical therapy sessions each week, Michael has regained some degree of feeling throughout his body and continues to make progress in gaining better physical functions. He also explores different options, including the use of a robotic arm, to help him become more autonomous. Since 2019, he was able to return to his restaurant "Whiskey Kitchen" at Raleigh for conceptual and administrative tasks. 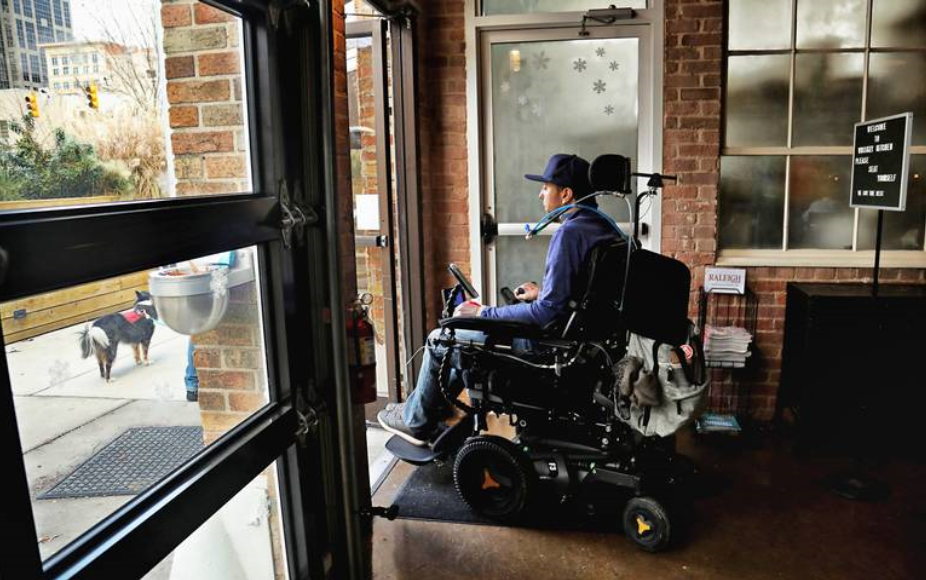 Michael can commute to his wheelchair-accessible restaurant, which is just a few blocks away from his apartment, with his motorized wheelchair on his own. (Source: Juli Leonard at newsobserver.com)

Michael doesn't set himself a time limit for recovery. He said,

"My positivity is geared towards knowing I'm going to get out of this chair."

It doesn't matter how long it takes but he believes he'll succeed one day. In the meantime, he continues to live up to his job managing the restaurant and document his recovery on Instagram as "The Crippled Cook".

What was or is your biggest challenge to getting back to work and the new normality after spinal cord injury? 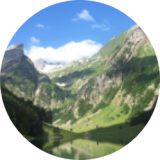 Engl
This comment was minimized by the moderator on the site