A healthy diet, a moderate consumption of alcohol and not smoking are the key elements for being healthy and living long. Numerous advice on the "right" and healthy diet are circulating in the media every day. Hardly one day goes by without the promotion of a new diet which promises health, well-being and a higher performance. Whether Stone-Age, food-combining, vegetarian, low-carb, high-protein diet or losing weight while sleeping – these are only a few examples from the jumble of diets and nutrition recommendations with many different opinions. 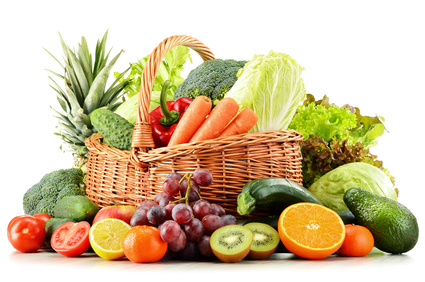 From a scientific point of view, not only the question "what is an optimized diet?" but also the social context is of high interest. The form of diet, the consumption of alcohol and smoking are strongly connected to socio-demographic factors, predispositions and the social environment. Age, gender, social relationships and support as well as the financial situations are influencing health behaviors. The diet and use of addictive substances are therefore not isolated characteristics but are often connected to the individual lifestyle of a person.

Within the SwiSCI survey, 511 people with SCI living in Switzerland were questioned about their health behaviors. The researchers evaluated the data and were able to identify, for example, how many portions of fruit and vegetables participants were eating on average and how many participants had taken cannabis within the past month. Then the researchers compared the data with those of the Swiss Health Survey of 2012 in which around 22,600 people had given information about their health behaviors. As third step, the scientists used a statistical analysis procedure to discover conspicuous connections between health behaviors and socio-demographic factors, for example, "Is there a difference of behavior between older and younger people?" and "Do people with a high income live healthier than people with a lower income?".

What did researchers discover?

Dietary habits of people with SCI

About 12% of people with SCI indicated that they were drinking less than one liter per day while about 38% indicated more than two liters. About one third of the survey participants reported that they were eating at most two portions of fruit and vegetables per day and only every fifth person achieved to eat the recommended amount of five portions per day. With respect to the consumption of meat it showed that 2% of the survey participants were not eating any meat at all and about 56% at least four times per week (see table 1). 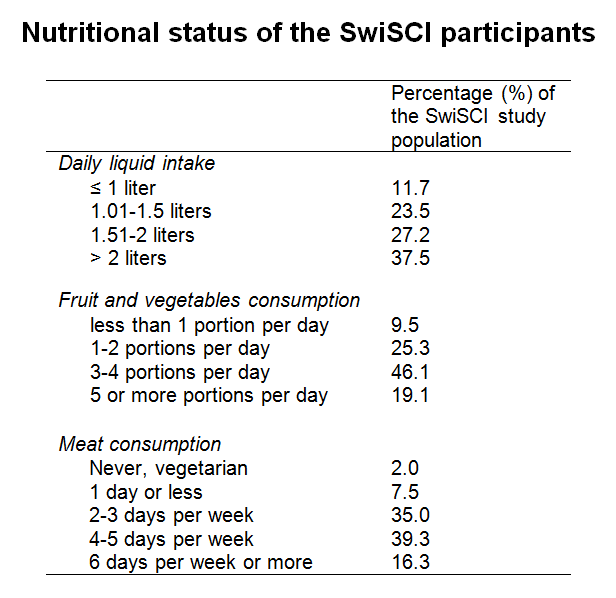 Comparison with the general population of Switzerland

In comparison with the Swiss Health Survey of 2012, the following minimal differences were identified: the fluid intake of people with SCI was higher and they were consuming meat slightly less frequently than the general population. Related to these indicators, people with SCI therefore followed a slightly healthier diet. In fact, the recommended daily fluid intake in persons with SCI is normally 2-3 liters, which is slightly higher than in those without an SCI in order to prevent constipation and urinary tract infections.
With respect to smoking, no differences could be identified: the numbers of smokers were nearly identical. There were significant differences in the consumption of alcohol and cannabis: a significantly higher consumption of alcohol among the general population was shown while the consumption of cannabis by people with SCI was significantly more frequent (see table 2). 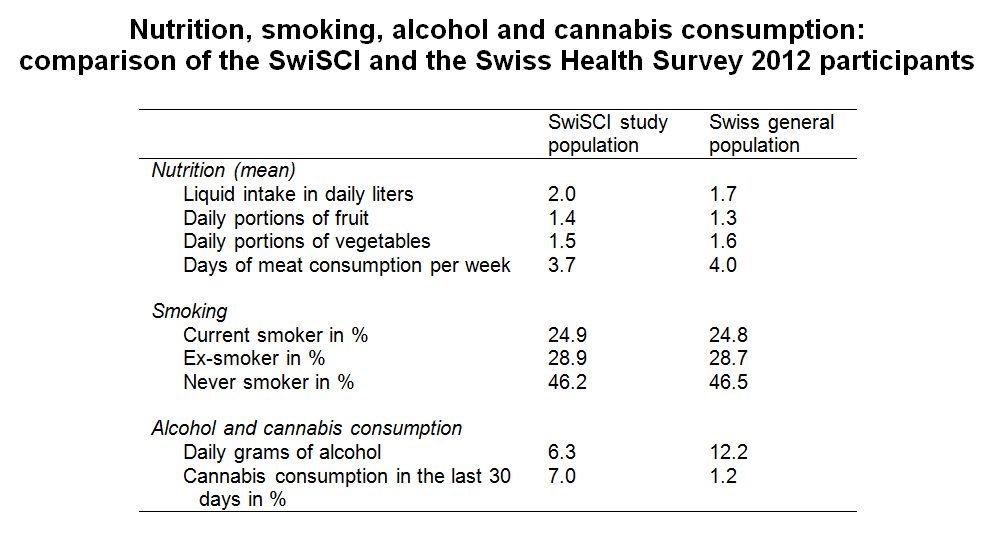 From decades of research it is known that age, gender, education and income are influencing health behaviors [references 1-3]. Surprisingly, however, the researchers were unable to find a connection between education, income and health behaviors of people with SCI. As expected, they were able to identify behavioral differences related to age and gender: It shows that, overall, men eat less healthy and drink more alcohol than women. Older people smoke less frequently and consume less cannabis but drink more alcohol than younger ones. 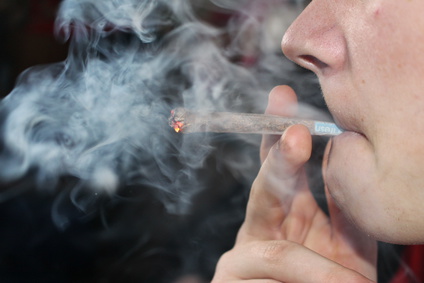 According to the study, there are hardly any differences in diet and smoking behaviors between people with SCI and the general population while people with SCI in comparison drink less alcohol and consume more cannabis.
Furthermore, the study shows that health behaviors of people with SCI from Switzerland depend on gender and age. It is therefore recommended to design programs for the promotion of health of people with SCI targeting their gender and age. For example, in order to reduce poor or malnutrition, health programs can focus more on men. Campaigns promoting to tobacco and cannabis cessation need to be specifically developed for younger people whereas the consequences of alcohol abuse should be the topic in prevention programs for older people.

The study was carried out and financed by Swiss Paraplegic Research in Nottwil, Switzerland.