Inclusion in the Swiss Armed Forces

The topics diversity and inclusion have gained more relevance in society over the last years. Also, in the Swiss Armed Forces this development is slowly taking place. This is important because, due to the general military duties, the Armed Forces are considered a depiction of the Swiss society.

In 2019, the Competence Center for Diversity of the Swiss Armed Forces was founded. It is responsible for all questions around the topics of diversity and minorities in the Swiss Armed Forces. It provides the bases for all militia members to be able to successfully complete their military service – independently of sex, sexual orientation, ethnic origin, religion, physiology, etc.

“We must take full advantage of the potential of diversity because it plays an essential role for the long-term sustainability of the Forces and its attractiveness to the population.”

Being inclusive creates challenges for the ones wanting to serve but partially also for the Armed Forces. This year, however, there have been several good news. In the spring, Nouh Arhab became the first recruit with spinal cord injury in the history of the Swiss Armed Forces. Furthermore, the Army admitted several athletes to the top-class athletic training. Such progress, however, often requires a lot of willpower and perseverance, as the example of Nouh Arhab shows.

21-year-old Nouh from Lausanne was born with spina bifida and is dependent on a wheelchair. He was motivated to serve in the Army. The responsible medical officer, however, did not even invite him into the examination room and told him already at the doorstep that he would not be fit for service.

“I have always accepted my disability. But nothing is impossible. There is always a way to integrate disability into the activities of persons without disabilities.”

The young man appealed the decision. He filed three appeals all of which were denied. After the fourth appeal, the Competence Center for Diversity of the Swiss Armed Forces and four physicians from different specialty areas were consulted. After more than 18 months, Nouh was eventually deemed fit for service.

Consequently, Nouh started his service as recruit in the barrack in Payerne, canton VD. He started as operations soldier in the Logistic Corps. For him to be able to cope well, his work environment was organizationally adapted, e.g. his room, the showers and logistic of the meals. 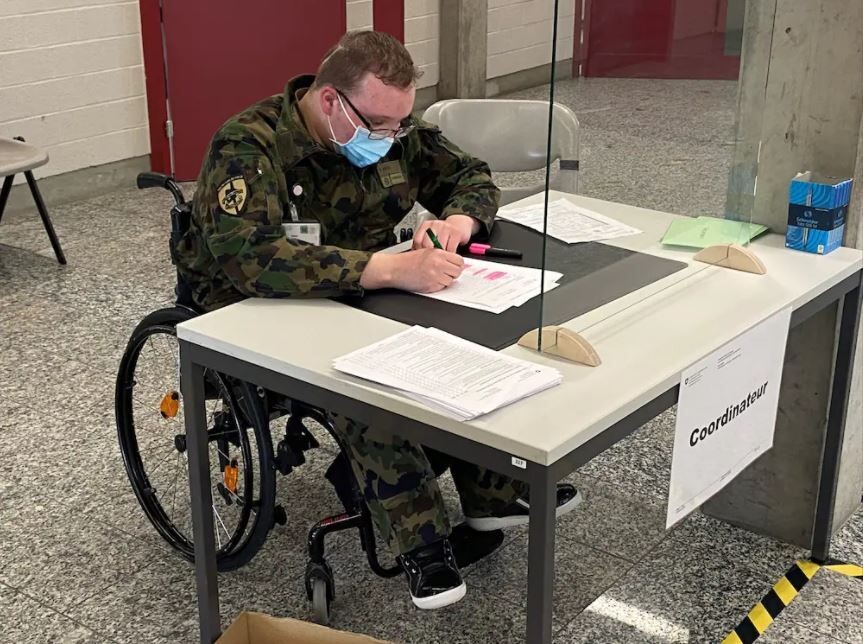 Army spokesperson Daniel Reist confirms that Nouh is the first recruit in Switzerland using a wheelchair. He calls it a pilot project with which the Swiss Armed Forces are aiming for more inclusion of persons with disabilities.

In the meantime, Nouh has reached the degree of a soldier. He likes being at the barrack, he says. The others there are no longer perceiving him as disabled. However, there are sometimes uncomfortable situations when he drives home by train:

“Some people think the uniform is a costume and make comments. I don’t reply and show them my marching orders.”

Another pilot project allows wheelchair athletes to attend the top-class athletic refresher courses (RC) (courses that the Swiss citizens must attend regularly in the years after being recruited). Since spring 2021, also three wheelchair athletes are benefitting from the top-class athletic training of the Swiss Armed Forces for the first time: Luca Olgiati (badminton) from Hausen, canton AG, Pascal Christen (alpine skiing) from Kriens, canton LU and Louka Réal (basketball) from Pully, canton VD. 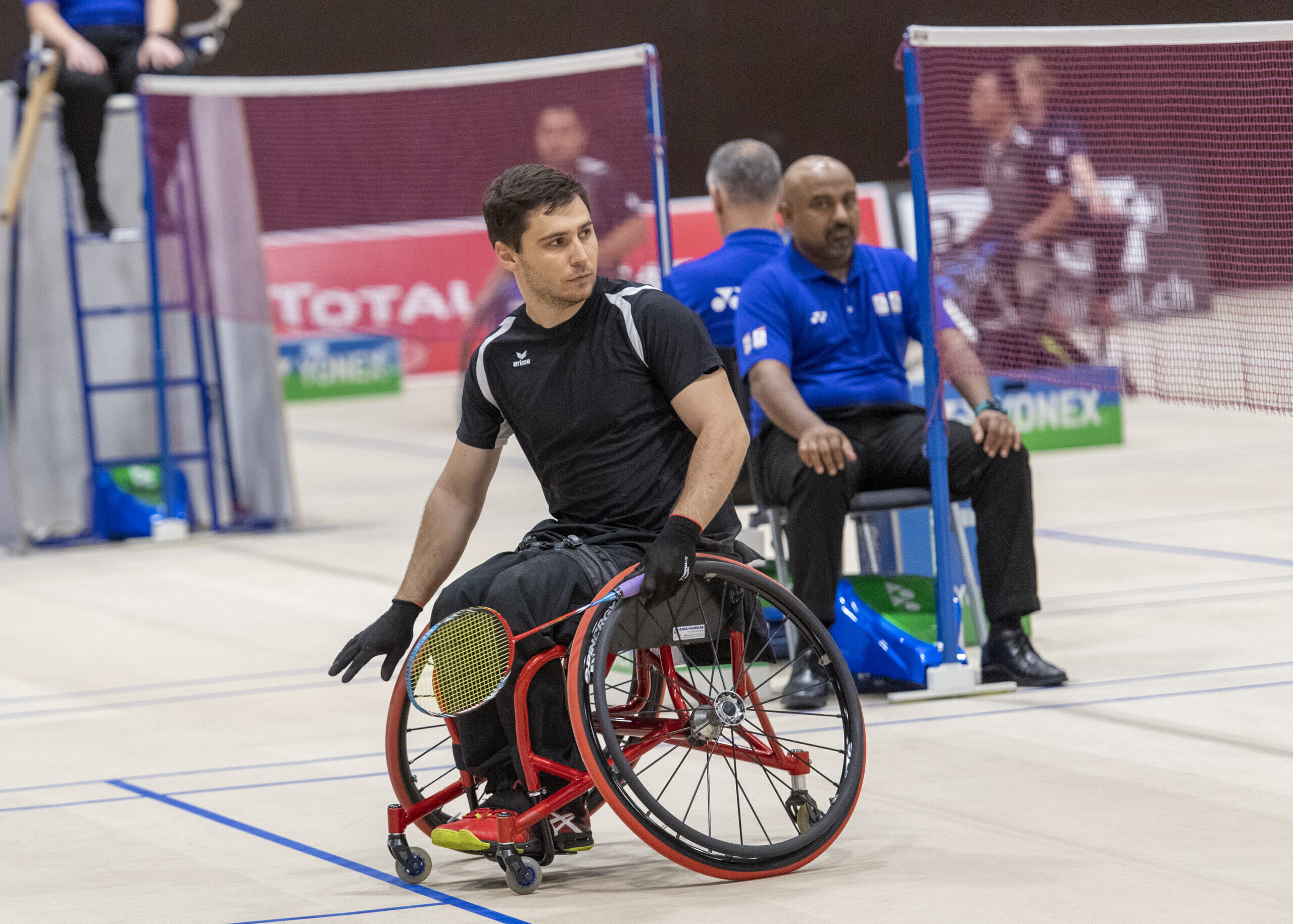 Their situation is different from Nouh Arhab’s: All three had already completed military training school before their disability. Afterward, a severe accident has left them paralyzed and unfit for service. By accepting them into the top-class athletic RC, they were re-militarized.

The three wheelchair athletes now get up to 130 paid RC days per year for training and competition within the top-class sport program. They usually attend these at the Sport Competence Center of the Armed Forces in Magglingen, canton BE. This training helps them immensely to prepare for the Paralympics 2022 in Beijing or 2024 in Paris. 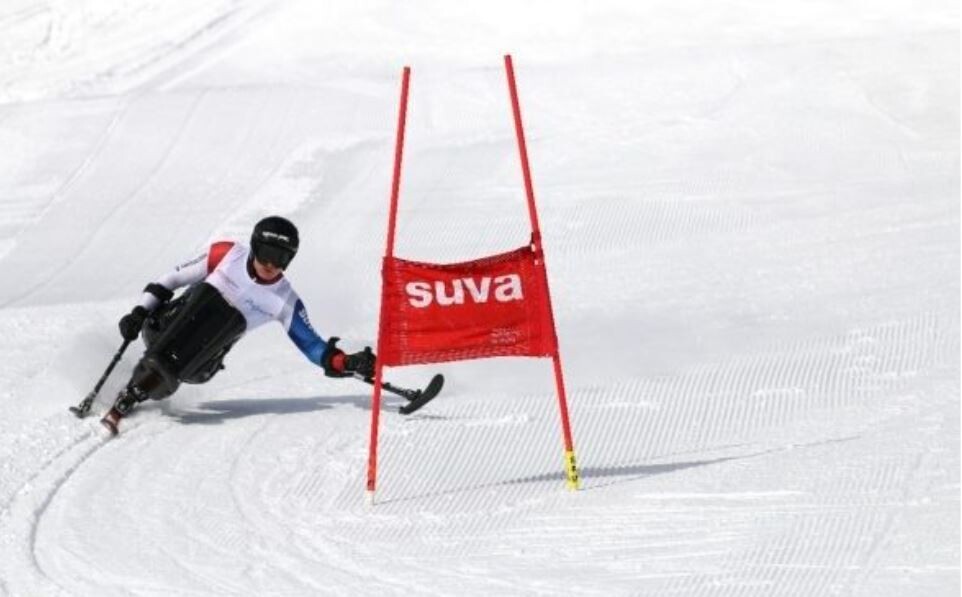 “On the one hand, I am proud of being among the first wheelchair athletes who can attend the RC. On the other hand, integrating athletes like me in the top-class athletic training of the Armed Forces is also important and appropriate with respect to inclusion.”

In this year’s editions of the magazine “Paracontact” there is a four-part series on top-class athletic training of the Swiss Armed Forces. It also portrays Luca Olgiati, Pascal Christen and Louka Réal.

“The support through the Armed Forces allows me to invest more time into training and reduces the stress with respect to my education.”

For the first time, two athletes with disabilities in the top-class military training school

In addition to the top-class athletic RC, also the military training school (MTS) for top-class athletes started accepting athletes with disabilities. In November 2021, also a female and a male athlete with disabilities entered the top-class athletes’ training school in Magglingen for the first time: Elena Kratter (athletics) from Vorderthal, canton SZ, and Fabian Recher (handcycling) from Spiez, canton BE. Both are now able to train for 18 weeks and receive compensation for loss of earnings and regular pay.

Due to complications during birth, Elena Kratter is wearing a prosthesis on her lower right leg. The 25-year-old works as orthopedic technician herself and manufactures her own prosthesis. She trains every day if her work allows her to do so. During her first Paralympics in Tokyo this year, Elena won bronze in long jump. 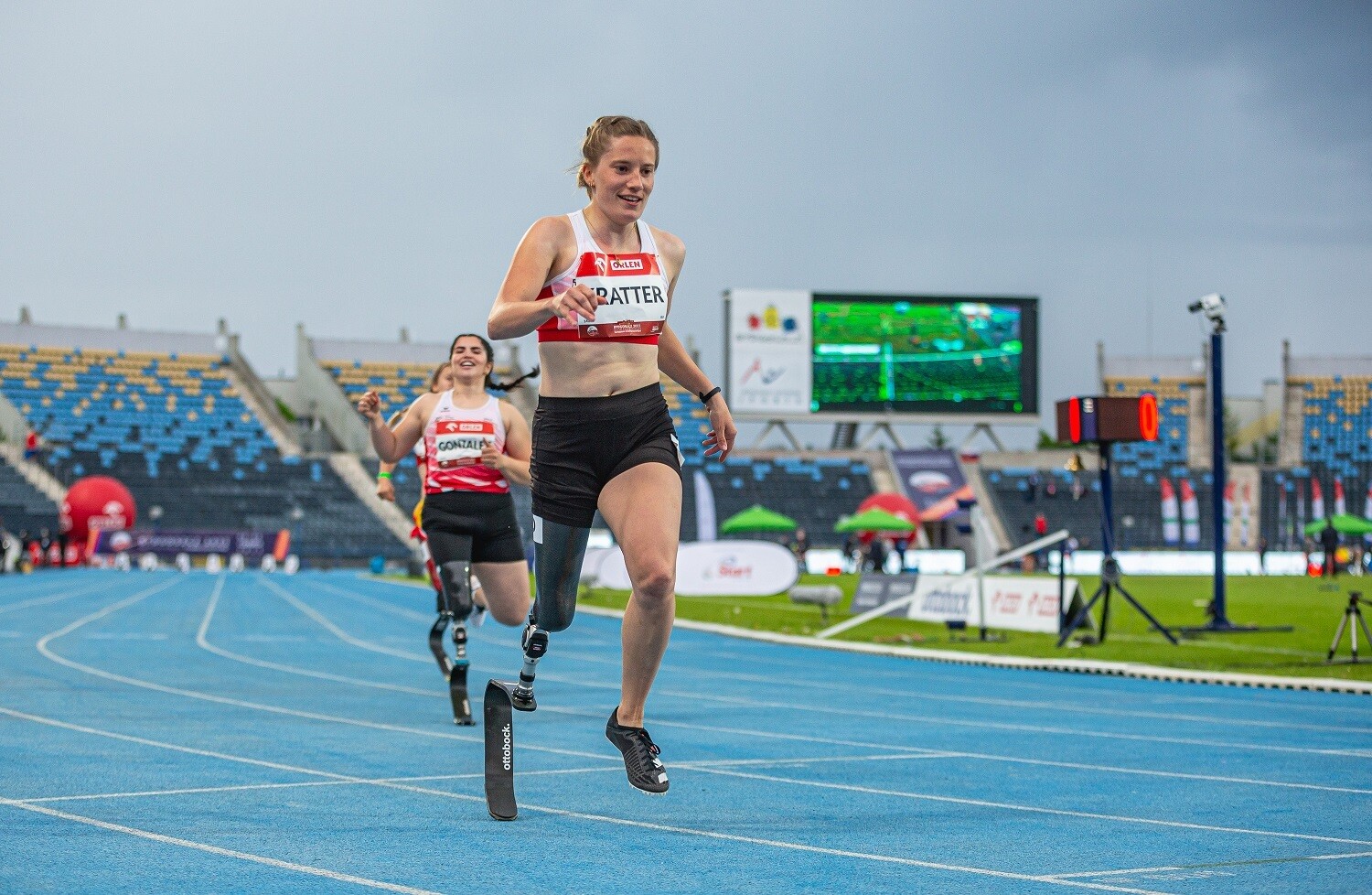 Fabian Recher now also has the opportunity to invest more time into training. The 22-year-old with spina bifida won the Swiss handcycle championship twice. At his first Paralympics in Tokyo, he obtained two diplomas. Aside from his athletic career, he works as merchant. Already four years ago, he wanted to join the top-class athletic MTS. “I was told – no chance!”, he explains. Now there has obviously been a change in thinking among the military leadership. 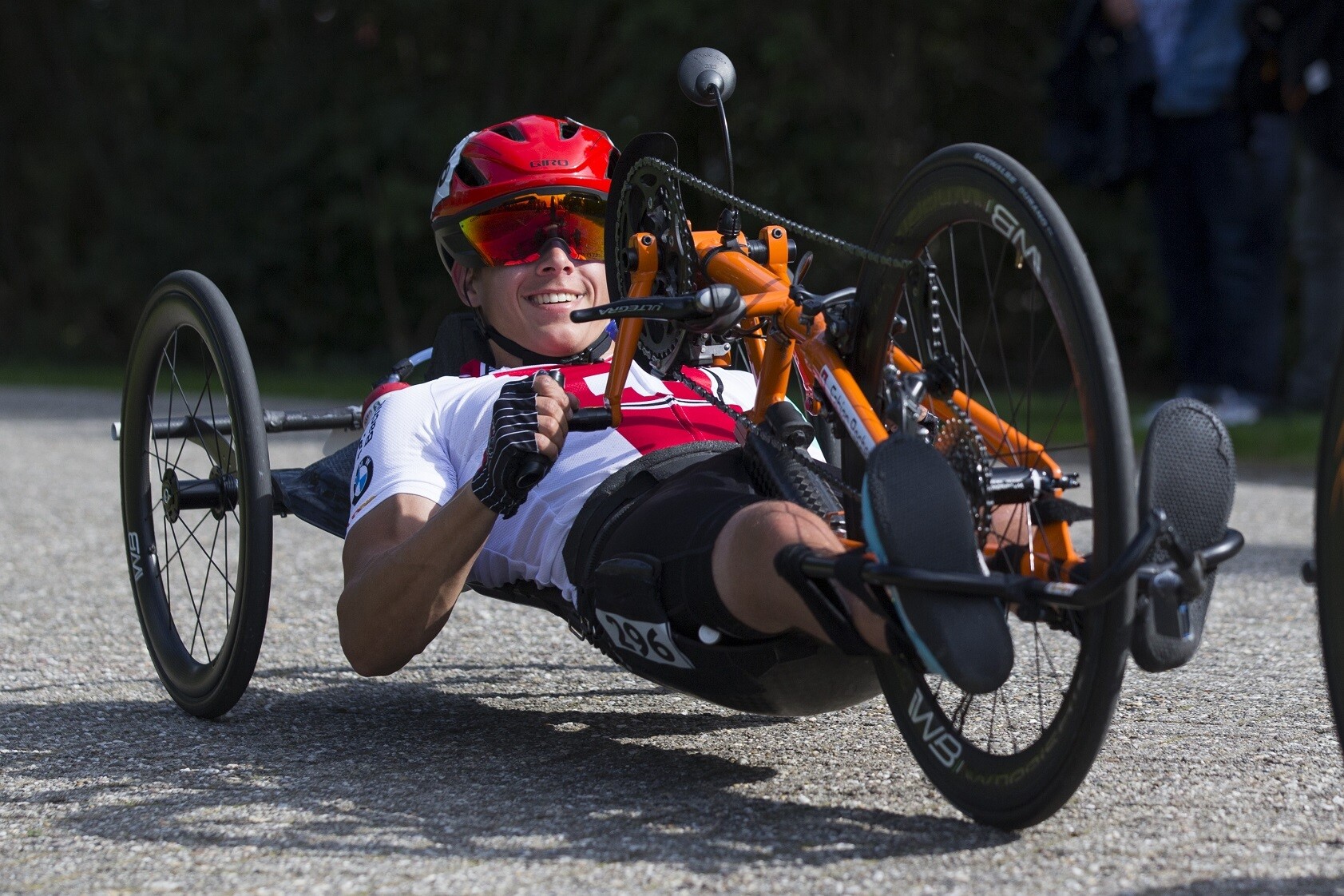 Even the SRF accompanied the two MTS top-class athletes at the beginning. The video above on this SRF.ch page shows how they experienced their first days. Fabian Recher has his own blog where he publishes regularly in the newsletter of “Rollstuhlsport Schweiz” about his time in the MTS.

After completing the top-class athletic MTS, both will also have the opportunity to attend 130 days of RC each year. This allows them to continue their professional training for the Paralympics 2024 in Paris – and, best case scenario, win medals for Switzerland. :-)

Reaching the goal with perseverance

A lot of persuasion was necessary in the Armed Forces before persons with disabilities were admitted in the top-class sport RC and the top-class MTS. As with Nouh Arhab, at first the medical officer had to be persuaded who is responsible for deeming a person as “fit” or “unfit for service”. There were also questions with respect to the military insurance that needed to be clarified.

This development was “pioneered” by the bicycle racer and upper-leg amputee Roger Bolliger. In 2018, he was asked by back-then Commanding Officer of the Sport Competence Center René Ahlmann, whether he had served in the army previously. Bolliger answered “yes” – and this was the beginning of a pilot project to include disabled athletes in the top-class training of the Armed Forces.

“Maybe I’ll be the first and last soldier in wheelchair. Or maybe many more will follow after me.”

The three presented developments this year are first steps toward inclusion of people in wheelchair in the Swiss Armed Forces. To achieve a fundamental rethink, a lot of commitment and perseverance is required from both sides. Things are looking good, however, that pilot projects may be able to develop into regular opportunities. And that Nouh Arhab will not remain the only wheelchair user admitted to serving in the Swiss Armed Forces.

What do you think about opening the Swiss Armed Forces to become more inclusive? Has this development been overdue, or should the Army only include people without wheelchair?