Making wheelchairs something cool to have?

Imagine going out with your wheelchair, but not on your wheelchair, like walking a dog. How does this idea sound to you? A wheelchair of such was presented this year at Rehacare, an annual international trade fair for rehabilitation and care held in Düsseldorf. This special wheelchair is known as iBuddy. 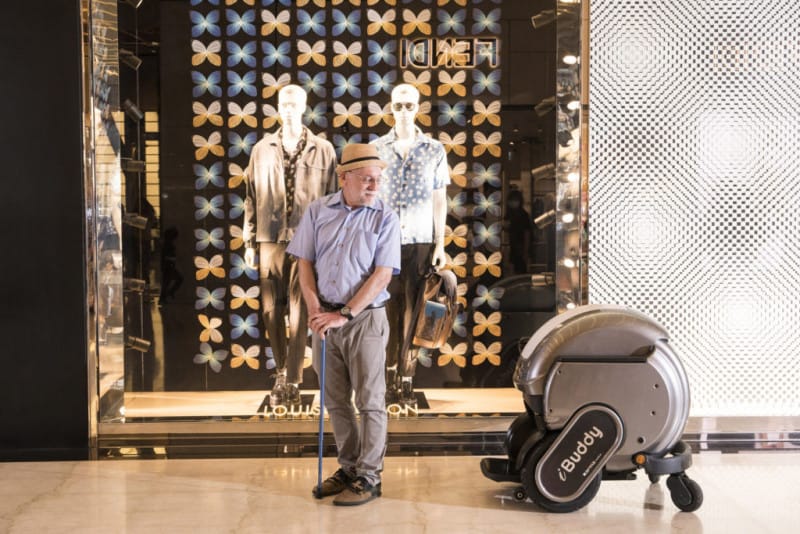 Do you want a buddy who can turn into a wheelchair when needed? (Source: karmamedical.com)

iBuddy is a robotic wheelchair developed by Mobotics Lab – a research and development team of Karma Medical Products, one of Asia’s largest wheelchair providers. It is the world’s first smart wheelchair, which can follow and transport the user around.

iBuddy targets seniors who are often affected by loss in mobility and thus become less active in lifestyles. Mobotics Lab points out that some seniors find it unappealing to use a wheelchair. They consider wheelchairs as a symbol of weakness. So, the main idea of iBuddy is to design a visually appealing and user-friendly mobility aid to arouse a positive response to using a wheelchair. Most of the time, iBuddy is rather like what its name suggests: a buddy accompanying the user around.

Mobotics Lab has also included trendy functions such as real-time tracking, which can keep caregivers informed about the location of the iBuddy’s user through smartphone app connection. With this function, assistance can be offered promptly when needed.

More than an assistive device

I have a mixed feeling about the concept of iBuddy. On one hand, I like how it allows people to be independent anytime they want. The last post in our blog was about the implications of self-driving cars for people with disabilities. Similarly to those cars, the self-driving and multi-tasking functions of iBuddy help users in various situations, in which they otherwise need someone to assist. That makes iBuddy a really appealing wheelchair.

How do you see yourself and others in wheelchair? Is it a symbol of strength or weakness?

On the other hand, I doubt that iBuddy could really motivate users to get around more with its appearance. As a user, I think I will appear awkward rather than trendy to others having such a bulky thing follow me around. If I mind people noticing me using a wheelchair, I am not sure whether I will like the idea of catching even more attention going out with such an outstanding equipment.

Such enjoyment and the concept of iBuddy make me wonder again about the purposes of assistive devices for people with disabilities. Do they need a tool or a machine simply for its assistive function, or do they need a tool which can help them appear stronger or even restore confidence in life again? I wonder if devices like iBuddy can work its magic to those with spinal cord injury who do not always need a wheelchair. I think it would be great to walk as long as they want, and to be able to get on a wheelchair whenever they need to.

What do you think about the iBuddy? And what does a wheelchair mean to you?