Four-legged friends on two legs. And on two wheels.

Lucky dogs: Dogs with impairments are able to run again – thanks to a “doggie wheelchair” and how!

Due to paralysis from accident or illness, after an amputation or because of old age: For us people there is a wide range of walking aids, prostheses and wheelchairs available. But what if “man’s best friend” can no longer stand on her own legs?

We will introduce you to some four-legged companions who, despite – or exactly because of - their impairment, encourage people with their undiminished joie de vivre.

Henry: from underdog to superstar 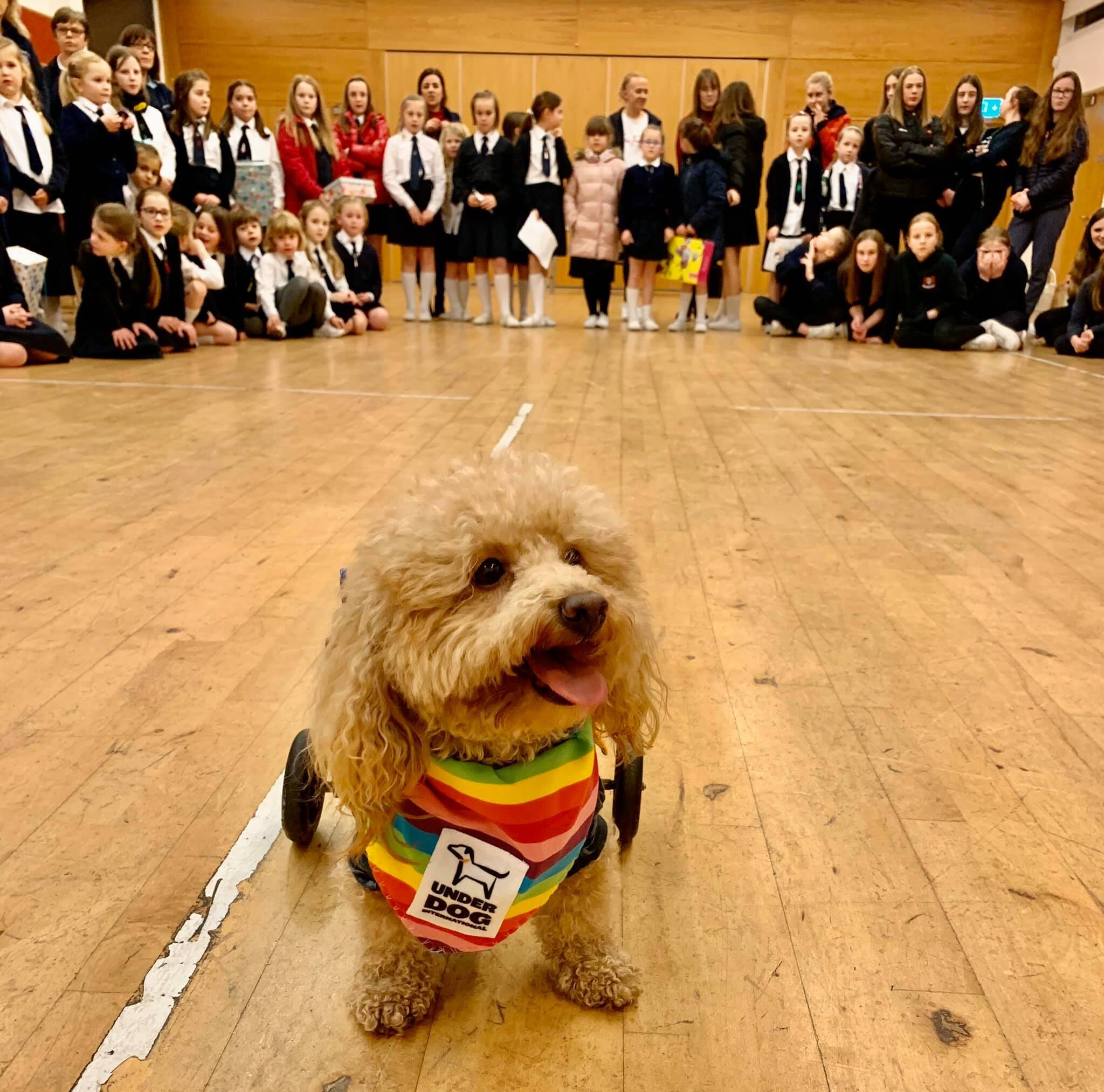 If little Henry visits schools, the kids get very excited.

His story resembles a Hollywood thriller: Paraplegic Henry was rescued by the animal rescue organization Harbin SHS Animal Rescue from a slaughterhouse in China. 8,000 km far away: Today the male poodle lives in Northern Ireland together with other dogs, among them another paraplegic female poodle, Roxy Rocket.

Thanks to his irresistible charm (and his mom Sharon Warnock), Henry Wee Wheels began his career as therapy dog. He visits school classes regularly and supports children in being kind with each other or with animals as well and helps them coping with personal challenges. The mission of the little whirlwind: Despite hopeless situations and considerable limitations, anything is possible. And of course being a star like Henry, he also has his TikTok and Instagram channel as well as Facebook page.

“Henry is my best friend. He always helps me when I am sad.”

Student who gets regular visits from Henry

When she was a three-months old puppy, the lively Olivia fell from a stone slab and broke her spine. Since then the female Golden Retriever is paralyzed from her neck down, a “dog tetraplegic” so to speak.

What now? Her owners wanted to have her euthanized but the veterinarians refused – fortunately! Mariana Camargo adopted Olivia and bought her a custom-made wheelchair – a pink one, as appropriate for girls. Today she has several dog friends with spinal cord injury. Watch more in this video (in German).

Hoping for a happy end: Moya the fighter

The greyhound girl Moya was found by animal welfare activists in a field in Rumania. She would not have survived in this state much longer: With her last ounce of strength the almost starved-to-death female dog dragged herself across the meadow with broken hind legs and raw to the bones. Despite her small chances of survival and the diagnosed incomplete spinal cord injury the helpers and vets tried everything to rescue Moya.

Since June 2021 the brave dog is in Germany, more specific at the animal shelter in Alsfeld. And still the fun-loving and sporty girl is looking for a new home where she can speed around in her wheelchair and can participate in life. Maybe this will help her getting adopted by a family with a wheelchair accessible apartment? She definitely deserves a happy end.

Dixie: A “miniature T-Rex” with a big fan community

The female mastiff has achieved what many can only dream of – becoming wheelchair independent. Due to a paralysis her hind legs were amputated in October 2019. According to her mom the “most terrifying but ultimately best decision”.

Ever since she has been depending on a wheelchair. Or is she? Because more and more often she does without and uses only her two front legs to roam the streets in her neighbourhood in the US State North Carolina. With her unique way of getting around she is now inspiring millions of fans on Instagram and TikTok. Watch this video:

“Dixie cheers me up every day and makes me believe that I can handle anything.”

“Tested” on humans, adapted for the dog

Why should there not also be assistive devices for our four-legged friends? For a few years, rehab specialists have offered all kinds of wheel carts, prostheses, bandages and orthoses for dogs. Not least because of the various sizes and limitations, no dog wheelchair resembles the other. For maximum quality of life, the aids are manufactured to order, either mechanically or even by a 3D-printer.

How the 3D-technology helps affected dogs is shown in the following two videos (in German): The missing front legs of dog Luisa are replaced by an anatomically adapted chest bowl. Also, the two puppies Athenas and Orion are able to walk for the first time thanks to custom-made leg orthoses with wheels.

Also AnyoneGo relies on 3D technology. Since 2016 the company – managed by wheelchair user Jan Jiránek – produces custom-made dog wheelchairs for Europe. On this website the furry customers “tell” their success stories themselves (in German).

For Annabelle Gossweiler-Furter manufacturing dog wheelchairs is a mission. After she adopted a female dog without hind legs in 2016, the woman from the Canton of Aargau has delved into the topic handicap and senior dog. Aside from wheel carts and other assistive devices she also offers “test walks” and workshops for people with affected dogs in her Happy-Handicap-Shop. This video (in German) shows Annabelle and paralyzed Muck in action.

As President of the Association for Dogs with Disabilities, Annabelle also advocates for information, support and networking for people with affected dogs. In fact, if a dog-person tandem works well together, a very rewarding relationship can develop. How much these dogs enjoy life is demonstrated during events or in schools.

“Paralyzed dogs often live very joyful lives. However, they are dependent on more understanding and support.”

Especially exhausting is the fight against prejudice. Every once in a while, she is called an “animal abuser” and is requested to free her wheelchair dogs from their pain. Luckily, she knows better. To give a small “proof” she has walked the Way of St. James in stages since May 2021 – together with her dog in wheelchair. Amen.

Do you also have a dog companion? What does he or she teach you? We are excited to read your stories about your four-legged favourites!

PS: Commercials use such moving stories as well. In our blog “Commerce with wheelchair users” we have already shown you the video of the two wheelchair users Michael and Chance. Watching it again is worth it – promised.