Children using a wheelchair have an impact on siblings and parents. The Anesini-Walliser family talks about their experiences

The girl soon realized that she was different than others: “At daycare everyone got their own chair with an animal sticker on it. Only mine had wheels”, says Siri Anesini. These are not bad memories for the today 30-year-old; for her this was normal. And the wheelchair she got back then turned out to be a blessing. “Not having to be carried around or crawl made a big difference.”

Siri was born with an open back (spina bifida). Her parents are the former ski racer and winner of multiple Olympic medals Maria Walliser and her husband Guido Anesini. After Siri’s birth it took them almost five years before they were ready for another child. The second pregnancy was accompanied by fears about the baby. At the same time, Siri had to go to hospital for surgeries on her hips and feet. “The balancing act was huge for us”, explains the mom.

With Noemi arrival the family was complete in the summer of 1996. Since then the parents’ attention belongs to both girls, love and care were distributed and doubled. “A good environment with parents and in-law parents, aunts and godparents gave us the necessary strength”, Maria and Guido agree. They did not want to differentiate but create shared experiences with their daughters. “And thanks to the lucky circumstance that she was always able to be a stay-at-home mom, the girls were able to also develop independently from each other and pursue their hobbies.” Therefore, Siri was and still is an avid reader while Noemi is very good in sports. 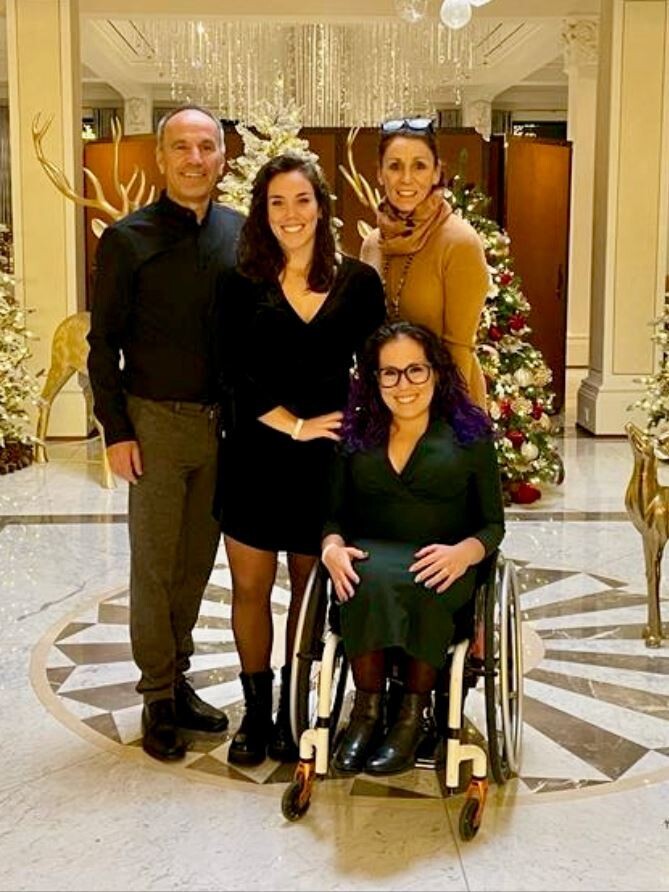 A strong family relationship unites the family of four. They never let themselves be limited by Siri’s wheelchair but mastered challenges together.

Being different but still close

That her big sister’s daily schedule was different than hers and she climbed the stairs in the house differently – moving hand over hand – did not slip Noemi’s attention. “And there were situations in which Siri was not moving as fast as I”, she explains. Often, she came along to physiotherapy when she was little or to wheelchair training and this is how she saw and learned about the differences.

Most of the time Siri herself explained to others who she was and what condition she had, says Mom. “And Noemi learned quickly how to support her sister and to perceive the wheelchair as something natural.”

“Already as a teenager I realized that growing up together with my sister had taught me respect and care. This enabled me to acquire many social skills.”

The bigger sister, on the other hand, had fun riding on the rear wheels only, to “stand on two wheels only” and be able to balance. Envious about the little sister who was able to walk? “That happened only very, very rarely. Maybe when Noemi was able to go places effortlessly, when she skipped over every little obstacle.” But, Siri emphasizes, these were only brief moments, nothing lasting. “Because I was able to do so many things. Mom made such a huge range of things possible. Nothing was impossible. 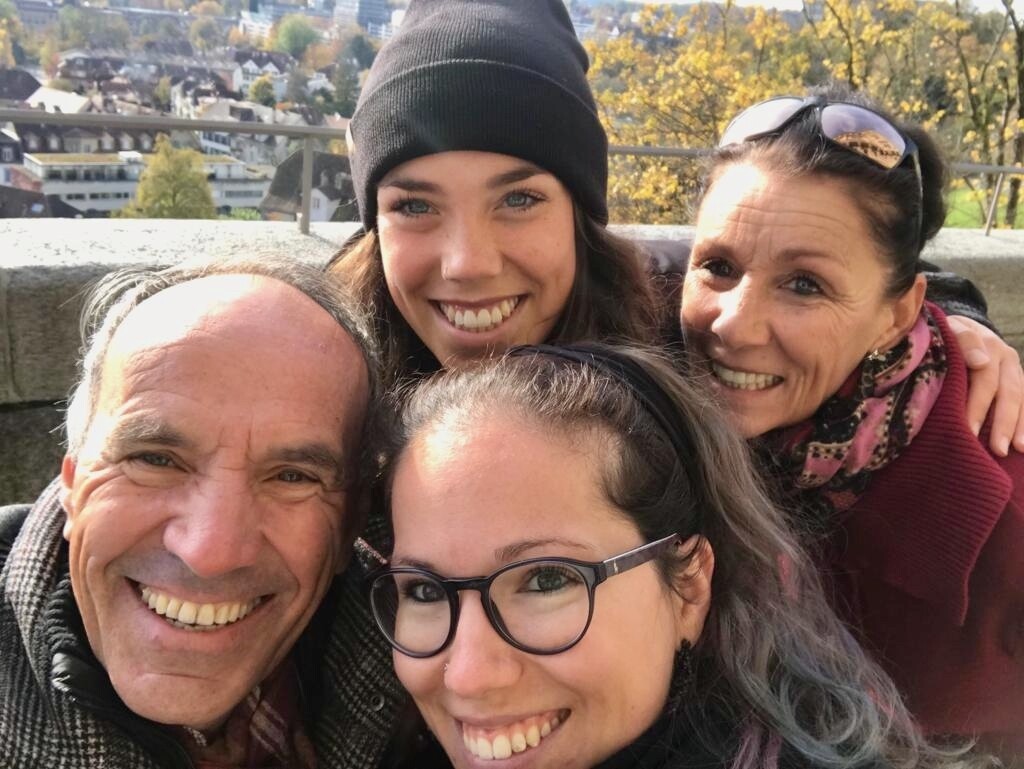 Doing things together was always important for the parents: Guido, Siri (front), Noemi and Maria Anesini-Walliser.

Being slow can be annoying in daily life

The older the girls were, the more they went their own ways. Siri went to the Appenzell Boarding School. Therefore Noemi had their home in Malans, GR, and all their parents’ attention for herself during the week. They were able to exercise and move around freely, explains Maria Anesini-Walliser. Because one thing should not be underestimated: “The extra time necessary due to a family member’s limited mobility is never easy to deal with.” Only with flexibility and empathy this can be overcome.

«A quick ‘sure, no problem’ does basically not exist in our daily lives. This kind of carefreeness is missing.”

For a young person with impairments it is challenging to make friends who often have to put their own interests behind. And a younger sibling is prone to developing an overbearing sense of justice. “Also because of that carefree living is sometimes not possible”, says Mom Maria. This can also lead to conflicts within the family – especially if it consists of four strong personalities.

“And it should not be underestimated with respect to our family structure that mother was interviewed frequently about all kinds of things and as President of the Foundation Folic Acid has a social function in preventative work.” Since 2000 Maria Anesini-Walliser has been promoting the essential vitamin folic acid throughout the country (see box below). 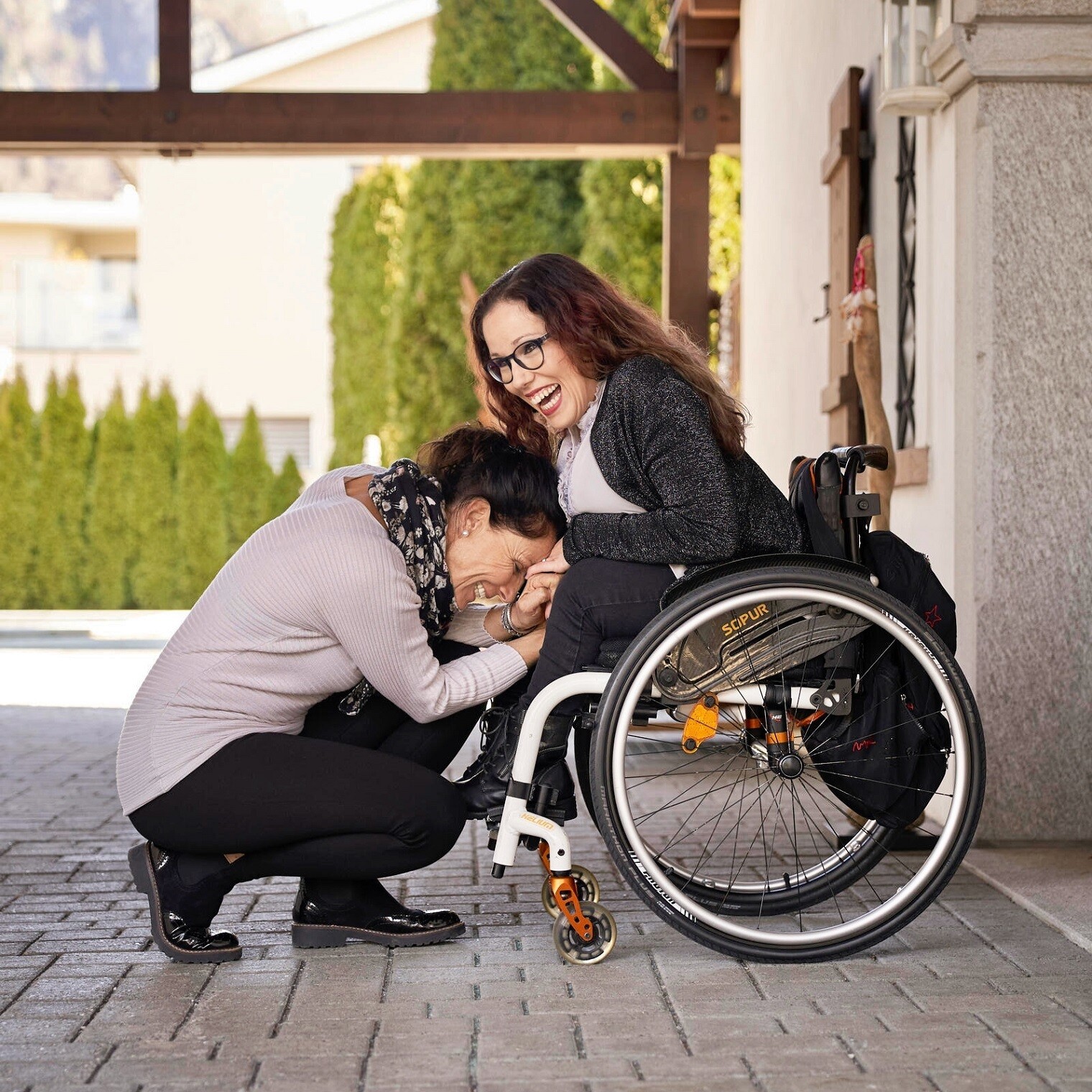 Being able to let go and still always being there for each other. Maria and Siri both have strong personalities. (Source: Hans Schürmann, Zurich)

The four of them have had many adventures together. Beach vacations, daytrips in the outdoors – this was motivating and energizing. “I was simply always taken along. This has had a great impact on me”, explains Siri. Not pointing out barriers but overcoming them together. Only the missing accessibility, also in well-developed Switzerland has often been nerve wrecking” Maria Anesini-Walliser adds.

Today Siri is a lawyer and lives with her husband, two tomcats and a dog in Malans. She is incredibly proud of her little sister: “I would travel to the end of the world if she asked for me.”

Noemi has a Bachelor’s in Communication and Sport and is working on her Master’s in “Tourism and Change”, she is a ski instructor in Davos and is involved in Swiss Snowsports, the umbrella organization of the Swiss Ski Schools and Instructors. She is delighted about their affectionate sisterly relationship with Siri and that “at age 25 and 30 also all smaller disagreements have vanished and cool discussions take place”.

The Foundation Folic Acid Switzerland was founded in 2000 to close the “folic acid” gap and to reduce birth defects such as spina bifida. How essential the vitamin is becomes clear through the fact that in almost 90 countries, flour is enriched with folic acid as mandated by the government. Switzerland is not among those countries but through the work by the foundation four out of five people know about folic acid. Furthermore the responsible persons organize lectures and support persons affected by spina bifida.

Do you have a family member who is using a wheelchair? Tell us about your experiences.