For the past year, many different spinal cord injury (SCI) stories of patients have been shared in the Community. Today I’d like to share with you the story of a SCI doctor. However, he’s not a doctor who treats SCI but a doctor with SCI.

Since 2017, Dr. Dinesh Palipana has worked as a doctor at the Gold Coast University Hospital in Queensland, Australia. The journey of becoming a doctor is never easy for anyone. For Dr. Palipana, this journey was even more challenging because he is quadriplegic.

In 2010, a car accident turned Dr. Palipana into quadriplegic. At that time, he was in the third year of his medical degree – halfway through finishing his studies. With such a severe SCI condition, he was told he could never complete his journey of becoming a doctor. If Dr. Palipana had trusted whoever made that comment, he would have never become the first quadriplegic medical graduate in the state of Queensland, the second in Australia.

Now Dr. Palipana is, according to him, living his dream. Despite being quadriplegic, he has found ways to perform his medical techniques. As you can see from his interview with Australia’s 9News, he can carry out most medical tasks professionally like many other doctors. 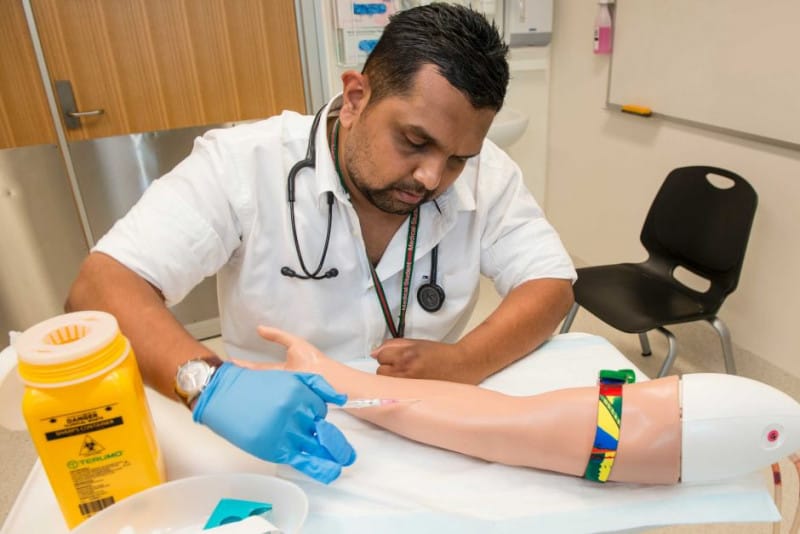 Learning to insert an intravenous cannula – one of the biggest triumphs during Dr. Palipana’s medical training. (Photo: Griffith University)

But do the patients trust him? Working in one of the busiest hospitals in Queensland, Dr. Palipana said, “none of my patients have reacted badly to me.” Indeed, patients may not be the toughest to deal with for doctors with impairment, but rather the education authority.

Shortly after Dr. Palipana returned to medical school, he found that the Medical Deans of Australia and New Zealand (MDANZ) had created a policy document that would potentially stop people with a wide range of physical and psychological challenges to practice medicine.

Dr. Palipana commented, “education is meant to be an expansive activity that extends the boundaries of human endeavor.” He questioned why educators would try to stop people with impairments to practice medicine when there are sufficient regulations to enable these people to work safely, with reasonable limitations on practice.

In fact, Dr. Palipana raised this question to his fellow senior staff during his clerkship in radiology at Harvard University. There he got a compelling and supportive opinion:

“If you can make the merit, then there is no place to discriminate physically.”

To strike for equal opportunities to medical training, Dr. Palipana has joined force with a few other doctors with different physical challenges to form an organization called Doctors with Disabilities – Australia (DWDA). The organization aims to provide advocacy and peer support on issues associated with medical study and doctors with a disability.

Learn more about Dr. Palipana’s story on “I might be quadriplegic, but I’m your doctor” and “No Barriers ahead for Dinesh”.

Would you mind having a doctor with SCI or other disabilities? What doctor’s qualities matter to you the most?