Two men: one lives in UK and at his early 60s; another lives in Austria and reaches his middle age. This blog post tells the stories of these two men who live in a wheelchair, and how they became writers of children’s books on disability.

Writing to connect with his grandson

Mid-50s is an exciting time for many as they get closer to their retirement age. For some, they may be fortunate enough to retire at this age and embark on their next chapter in life. Brian Abram from UK is one of them. However, he was not that fortunate. His new chapter in life started in a way that no one would dream of: a bicycle accident has left him paralyzed from the waist down since 2013.

Like others with a spinal cord injury, a series of challenges awaited Brian. On top of that, he was a new grandad to the six-month-old Charles. During his rehabilitation, Brian was already certain of his priority: he wanted to help his grandson understand why he can’t walk like other grandads. Therefore, he started writing about his life in a wheelchair as children’s stories when Charles could barely read!

In November last year, with the suggestion and support from his family and friends, Brian published his first book “Charlie’s Big Idea!” featuring himself as Grandad Wheels and his now six-year-old grandson Charles. He has already planned for the release of two more books in the current series “The Adventures of Grandad Wheels” – one of which will feature Hannah Cockroft MBE, the British wheelchair racer and 5-time Paralympic champion. 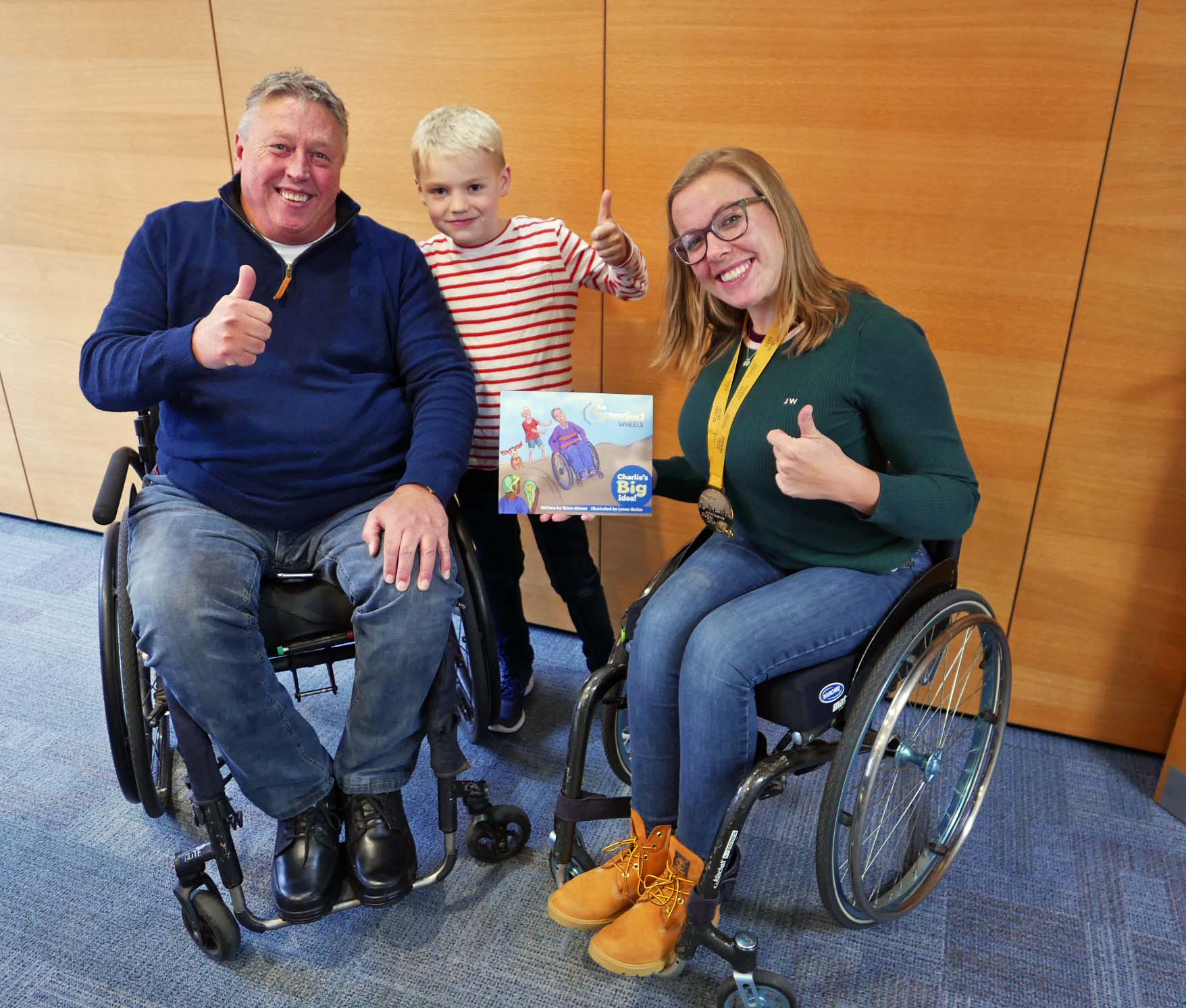 Brian, Charles and Hannah pose for a photo with the first book of “The Adventures of Grandad Wheels” series. (Source: Facebook@grandadwheels)

It was reported that children’s literature nowadays feature not as many children with disabilities as in the Victorian era of the 19th century. Children’s books which explicitly refer to disability are also hardly the best-selling books. Brian would like to change this situation. He hopes for more children’s literature on disability in a fun, realistic and rewarding way.

Writing to answer questions people have about disabilities

We often talk about things we should not say to wheelchair users. However, children are innocent and curious. They hardly care about social conventions and would just ask away. Therefore, children’s literature on disability and guidebooks to explain disabilities to children become particularly handy.

Yet how many parents still feel embarrassed when their children fire away their innocent questions, such as “What’s wrong with you?” or “Why are you sitting in a wheelchair?”, to wheelchair users they meet on the street? Franz-Joseph Huainigg from Austria has been through that many times – not as an embarrassed parent but the person being asked these “embarrassing” questions.

Franz-Joseph has been paralyzed since the age of 7 months. As he travels around in his wheelchair, children often come up to him asking about his situation. Frequently the children would be quickly stopped by their parents to ask further because they think it’s rude. Franz-Joseph has a different opinion and he explains it in this video:

Franz-Joseph thinks children should be encouraged to ask all the questions they have in mind. Thus, he became a children’s literature writer. Recently, I have read his book “Gemeinsam sind wir große Klasse” (EN: Together we’re great). It is a compilation of his four children’s books about living with a disability: “Meine Füße sind der Rollstuhl” (EN: My feet are my wheelchair), two books on being mute and blind, and one about children with and without disabilities learning together at school. His books were translated into many languages, such as Spanish, Chinese, and Korean, but unfortunately not yet into English. 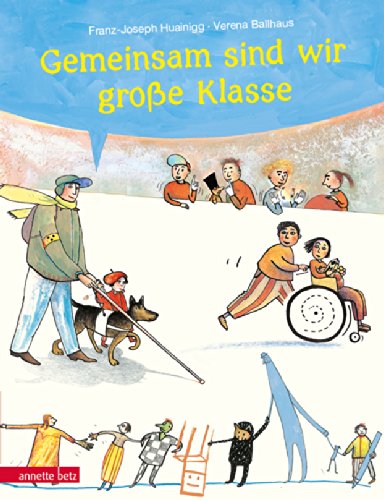 The story of a little girl in a wheelchair

“My feet are my wheelchair” was published in 1991. It is a story about Margit, a little girl in a wheelchair, and her first trip alone to the supermarket. There are two plots in the story which I find particularly reflective.

The first plot is when Margit rolls past a bench where an elderly couple is sitting. The old man asks Margit pathetically, “What happened to you?” It is followed by a loud mournful sigh by the old lady, “So young and already so poor!”

Margit can’t understand why the old couple and some other strangers on the street feel so much pity for her. She was so delighted about her first independent shopping trip, but not anymore now. Feeling annoyed, she calls out to the old couple, “I’m no different from other kids.”

The second plot is when Margit arrives at the supermarket. She rolls on the ramp into the supermarket and finds her way to the fridge where the milk stands. When she’s about to reach for the milk, it is already being handed to her by a friendly supermarket assistant. Instead of feeling thankful, she feels annoyed because she didn’t request for the help.

Later, the assistant helps again voluntarily when Margit starts to reach for a bag of apples in the fruits section. She is so upset and says, “I’d like to pick the apples myself like everyone else!” That leaves the assistant in total incomprehension.

These two plots wonderfully depict some misunderstandings and tensions between able-bodied people and the community with disabilities. Disappointingly, many people still associate disability with misery and pity. The overflow of compassion becomes a challenge to people with disabilities: they have to fight for their chances to live independently and be treated equally.

In addition to children’s literature, Franz-Joseph has other publications about himself and disabilities, like his book “Mit Mut zum Glück: Das Leben wagen” (EN: With courage to happiness: dare to live) published in 2016.

Having been a parliament member of Austria’s National Council for 15 years, Franz-Joseph started working in the humanitarian broadcasting department at ORF, the Austrian national public service broadcaster, in January 2019. He has a YouTube channel with videos giving insights into his everyday life as well as his opinions and work on disability rights. The video below shows his humorous side while delivering a brief yet powerful message:

“We have to give people with disability a voice. Nothing about us without us.”

Are there any other children’s literature and writers on disability you’d like to recommend? Share with us!